Lloyd-Webber star is a Hot ticket after spectacular Champagne show 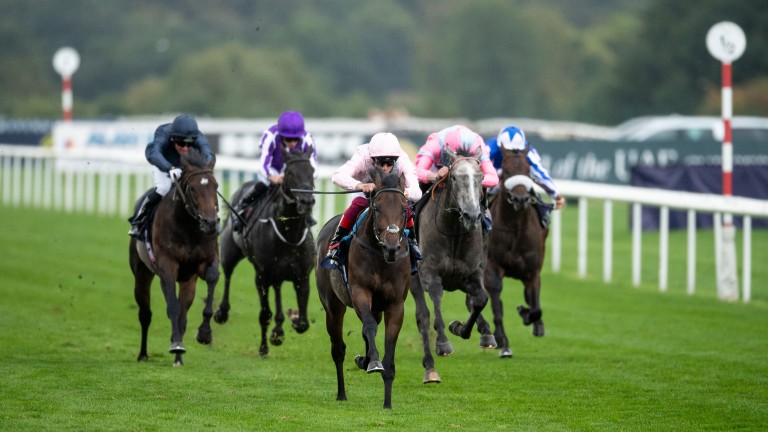 What a story. Lord Lloyd-Webber won't have to look very far when he seeks inspiration for his next theatrical blockbuster.

Too Darn Hot is named after the hit song from a musical and his short life story has all the material for a show to wow them in the West End and on Broadway.

All the scriptwriter's staples are there, beginning with the difficult start to life – the colt bred by his wife's Watership Down Stud suffered an early injury which meant he might never have raced.

There's the twist of fate that his setback meant he went into training with John Gosden rather than heading to the sales, like all his breeders' previous male stock.

And there's the heart-stopping but ultimately spectacular finale as Too Darn Hot, unbeaten in two previous outings and sent off 4-11 favourite for the Group 2 Howcroft Industrial Supplies Champagne Stakes, overcomes adversity on course to score in glorious style.

Those who had taken the odds-on were certainly sweating as he sat some way off the pace through the early part of the race with Frankie Dettori accompanying Silvestre de Sousa on market rival Dark Vision, well behind the pacesetters.

Cue the special effects as our hero positively exploded into action, showing astonishing mid-race speed to close on the leaders, hit the front approaching the final furlong and pull clear for a length-and-three-quarters victory over Phoenix Of Spain that made him clear favourite for the Qipco 2,000 Guineas and Investec Derby at around 4-1.

The Lloyd-Webbers are used to welcoming high-class fillies back to the winner's enclosure, thanks to the exploits of such as Crystal Music, The Fugue and Too Darn Hot's own dam Dar Re Mi.

Walking back with his wife after their latest triumph, Lord Lloyd-Webber said: "This is a very unusual one for her because she never keeps the colts. This one had a minor injury and her team thought that we shouldn't, and couldn't, sell it.

"So for it to be a homebred, and the first colt, and to come through an injury when he was very small, makes it very special for her. It's quite an exciting thing because we didn't really think that the horse would ever race.

Dettori was just as thrilled and said: "I was concentrating on Silvestre and he took me too far back. I had a look up at halfway and thought, 'Forget about him, go after the others'.

"What he did between the three-furlong pole and furlong pole was pretty amazing. He made six lengths in two furlongs – pretty special. Today is his first time on a flat track and he gave me a really good feel, he went through the gears."

Of course, every good show needs at least one sequel and for the well-entered-up Too Darn Hot that looks sure to come on the big stage.

"He's in the three Group 1s in October and there will be no decision in ten days," Gosden said. "I was happy with him, he did everything right."

So too was Racing Post juvenile handicapper Simon Turner, who allotted 117 for this performance, just 1lb below his Solario Stakes-winning figure which put him top of the two-year-old tree.

Vintage Stakes winner Dark Vision, running for the first time in the Godolphin silks, trailed in last of the six runners.

Trainer Mark Johnston admitted: "His performance was diabolical. He was under pressure almost immediately and wasn't going to be involved from a long way out.

"The jockey said the ground was very loose, but I've never been someone who looks to blame the ground especially with a horse only having had three races before today."

FIRST PUBLISHED 3:21PM, SEP 15 2018
What he did between the three and the one was pretty amazing. He made six lengths in two furlongs, pretty special

Inspiral 16-1 joint-favourite for 1,000 Guineas after Listed success 'I was humiliated and I wasn't taking it' - inside the mind of Frankie Dettori Mark Crehan gets backing of Stoute and Dettori following 28-day Doncaster ban Clive Cox contemplating Glorious Goodwood bid after Caturra comes good Native on the trail of fellow Godolphin stars after narrow Superlative success