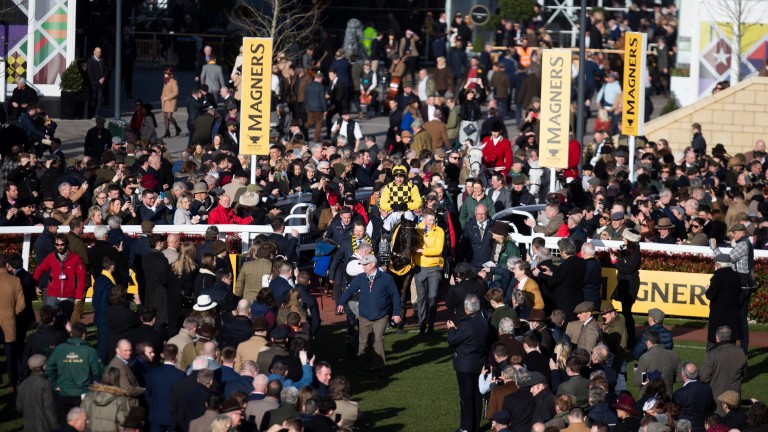 With Britain in lockdown, the Cheltenham Festival has become a favourite target for those seeking someone to blame for the spread of the coronavirus pandemic.

The four-day event drew 250,000 people just days before mass gatherings were banned, in an attempt to restrict the virus, and racing went behind closed doors and then stopped completely.

The BHA has continually stressed that government advice was followed before and during the festival, when such events were not seen officially as a high area of risk, if appropriate hygiene measures were in place and observed.

Culture secretary defends decision for Cheltenham Festival to go ahead

A front-page story in The Guardian newspaper on Wednesday was the latest to suggest that the Cheltenham Festival led to a rise in coronavirus cases locally, so the Racing Post has looked at the evidence.

Is it true that Gloucestershire Hospitals Trust has an unusually high mortality rate for Covid-19?

However, the article made no mention of relative sizes – to put the figures into context, Worcestershire Acute NHS Trust serves 20,000 fewer people than Gloucestershire yet has had 21 more deaths, whereas North Bristol serves 300,000 more and has had 69 fewer deaths.

As Sarah Scott, Gloucestershire's director of public health, said in the Guardian article: "There are many factors that could influence the number of cases in an area, including population density, age and health profile and the position of an area on the pandemic curve. It is also not possible to make comparisons between hospital trusts across the region as they all serve populations of differing size and characteristics."

HSJ statistics for reported Covid-19 positive deaths in England per 100,000 people put Gloucestershire comfortably in the bottom half of a table headed by The Black Country and West Birmingham.

And Gloucestershire's mortality rate could not necessarily be blamed on the Cheltenham Festival, whose racegoers – and many of its workforce – come from further afield.

Is there any evidence that Cheltenham contributed to the spread of coronavirus in Gloucestershire or elsewhere?

While entirely possible, evidence that the festival contributed to a significant spread of the coronavirus is purely anecdotal, such as the celebrity cases mentioned in the Guardian article.

Gloucestershire actually has a lower number of confirmed Covid-19 cases than surrounding counties - the south west itself is very low and within that Gloucestershire is below average.

As it stands, there is still much that is unknown about the coronavirus, including the role mass gatherings like Cheltenham might play in spreading it.

In an article in the Lancet published last month, the World Health Organisation's Novel Coronavirus-19 Mass Gatherings Expert Group wrote: "at present there is scant evidence on the effectiveness of individual mitigation actions for Covid-19".

Did other big events take place around that time?

In the week of the Cheltenham Festival there were ten Premier League football matches and Atletico Madrid played a Champions League game at Liverpool, bringing 3,000 supporters from a country further along the Covid-19 timeline than Britain.

Rugby internationals were played at Twickenham and Murrayfield and the Stereophonics played in front of 15,000 people over two nights in Cardiff.

What do experts say about the role big events, like Cheltenham, are likely to have played in the transmission of the coronavirus?

Cheltenham medical officer Sue Smith is among those who have stated it is impossible to know where and how any individual has contracted the coronavirus and, in the absence of testing, whether they actually have the virus.

And Dr Tony Holohan, a more objective expert as Ireland's chief medical officer, has said there is no evidence whatsoever to suggest a link between people who were at the festival and cases or clusters of the coronavirus.

Are experts really calling for an investigation into the Cheltenham Festival?

Despite much media comment on the subject, experts - as opposed to media commentators such as Piers Morgan - seem not actually to be calling for an investigation into the festival.

Even Professor John Ashton, a former director of public health for Cumbria who was quoted in the Guardian article, said the figures "deserve to be properly investigated" rather than demanding an inquiry into the festival itself.

Indeed, looking at the Cheltenham Festival in exclusion - when dozens of other major events took place around the same time, workplaces remained open and millions were travelling on public transport - would provide limited evidence towards understanding where and how the coronavirus spread.

FIRST PUBLISHED 5:54PM, APR 29 2020
As it stands, there is still much that is unknown about the coronavirus, including the role mass gatherings like Cheltenham might play in spreading it