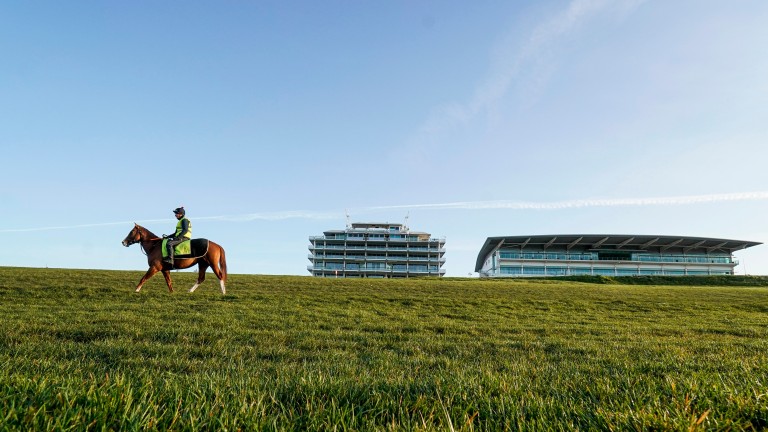 The scene in Epsom last week: the BHA on Wednesday indefinitely suspended racing in Britain
Alan Crowhurst (Getty Images)
1 of 1
By Tom Park and Jonathan Harding UPDATED 11:29AM, APR 16 2020

The BHA on Wednesday delayed the return of racing indefinitely due to the coronavirus pandemic, but chief executive Nick Rust was adamant that the sport is ready to resume once it is safe to do so.

Racing was suspended on March 18 before the government introduced the current lockdown measures to protect essential emergency services and the health and safety of the public.

The BHA, which had initially hoped for racing to return on May 1, has not set a new date for ending the suspension, but plans are in place so that the sport is ready to resume as soon as it is possible and appropriate in consultation with government. The BHA, which still hopes to resume at some point in May, also said that any return to action will be behind closed doors until at least June.

Plans for a resumption are believed to potentially include racing hubs with on-site hotels holding multiple fixtures behind closed doors, and Newcastle, Lingfield and Hamilton have been mooted as tracks under consideration.

Nick Rust: "It's right to continue this suspension until the pressure on the NHS allows for a resumption"
John Grossick (racingpost.com/photos)

Nick Rust, BHA chief executive, said: "We stopped racing in March to protect the health and safety of the public and to limit demands on the NHS. It's right to continue this suspension until the pressure on the NHS allows for a resumption and we can assure the safety of those taking part.

"We are in touch with government as part of our development of a responsible, coordinated plan for the return of sport when it’s appropriate to do so.

"We'll continue to develop a range of options drawing on the expertise of our participants and racecourses. But for now, we are all focused on supporting the national effort, maintaining social distancing restrictions and taking care of our people and our horses."

Speaking in an interview on Sky Sports Racing following the announcement, Rust added: "As soon as we are clear with our daily discussions with the government about a return, then we will be ready to do so.

"When we have the right conditions then we will be able to resume racing in as good a form as we can, which will be behind closed doors and will mean social distancing and restrictions on track and where we can race. We have planned a number of scenarios so we are ready to go.

"Sport has to listen to what the government is advising us to follow, but we are talking to the government every day and making the point that when conditions allow, we are able to resume economic activity.

"We didn't want to put a date on it to give false hope or to mislead, but we are saying to the industry that we will be ready to come back as soon as those conditions are satisfied.

"The government knows we are not just a sport and it is aware of that. It knows that we are industry with 14,000 horses that need looking after and that staff can't look after horses if they're furloughed.

"So our industry is bearing a huge cost to keep maintaining the standards we expect and the industry is doing a tremendous job of keeping going at this time. The sport is ready to return under all circumstances, once it is safe to do so."

On the sport's financial reserves, Rust added: "People have talked about £125 million being available to the sport through the Levy Board and Racing Foundation.

"The Levy has £45m at the moment and we need to use that carefully for the return of racing. The Racing Foundation will do its best to support welfare in the meantime."

Trainer Richard Fahey told the Racing Post last week that he was pleased the group making plans to resume racing were at least planning ahead, and he again praised the efforts of those involved.

He said: "It's an extremely difficult decision as a lot can happen in two weeks. Until we get some good news we can't race, but nobody knows when the good news is going to happen.

"I'm happy with what the group are proposing but nobody wants to race while we are in lockdown and they have everything in place for when racing is ready to return."

No racing has taken place in Britain since March 17. On Wednesday, the number of coronavirus-related hospital deaths recorded in Britain rose by 761, taking the total to 12,868.

The coronavirus has also had a devastating impact on the economy in Britain and on Tuesday the Office for Budget Responsibility warned it could shrink by up to 35 per cent this spring.

'Anxious to get going again'

In a letter sent to trainers by the BHA this week, a copy of which was seen by the Racing Post, it was suggested that British racing faces losing an estimated £193m in revenue if the sport remains shut down until July, with trainers among those facing uncertain times.

Rupert Arnold, chief executive of the National Trainers Federation, said: "Most trainers will not be surprised that the suspension has been extended given what everybody knows about the situation nationally.

"Having said that, everybody is very anxious to get going as soon as we can as there's a consistent view across the sport that's the best way to protect business, people and horses.

"We all want to get going as soon as we can but trainers will no doubt be appreciative of the reference to the aim of starting in May.

"The best balance we can strike is to be as prepared as we possibly can and to have a plan in place so we are able to start as soon as the right conditions are met."

On the financial implications for trainers, Arnold added: "It's on a knife-edge really. The longer the delay and uncertainty, the more difficult it will be for businesses to adapt and retain horses.

"Across the board trainers are appreciative of owners keeping horses in the yards and in training. Their decision to support trainers helps them retain jobs and ensure horses continue to be looked after."

France hopeful of restarting racing next month despite lockdown extension

FIRST PUBLISHED 4:39PM, APR 15 2020
Until we get some good news we can't race, but nobody knows when the good news is going to happen