Brilliant Battaash back on his A-game with tour de force 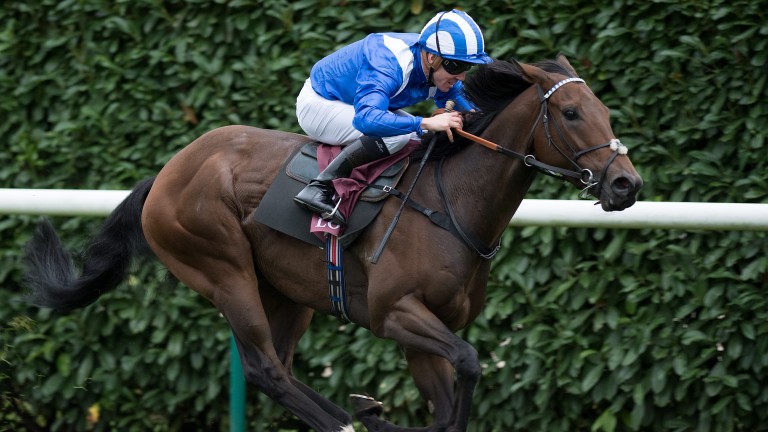 It was the sort of performance you had to see to believe and even then it was scarcely fathomable.

The Prix de l’Abbaye, one of the fastest Group 1 races in the world, is usually settled by a nostril here and a pixel there, but this was over soon after halfway, as Battaash bounded further and further clear of a field that included Nunthorpe winner Marsha and fellow Group 1 scorers Profitable and Signs Of Blessing.

Victory erased the memory of a nightmare trip to York last time for trainer Charlie Hills and rider Jim Crowley, where Battaash had lost his race before it had started as he bubbled over long before the gates were loaded for the Nunthorpe.

A Jekyll and Hyde character, when Battaash is good, he is nearly unbeatable. When he is bad, he is uncontrollable.

The serene setting of the Abbaye’s temporary home, buried deep in the Chantilly forest, proved the perfect pre-race sedative on this occasion, with Battaash saving the fireworks for the track.

“He’s been stood on three legs all morning and has just taken everything in his stride,” said Hills, who just two seasons ago trained champion sprinter Muhaarar in the same Shadwell silks of Hamdan Al Maktoum.

“We did everything in reverse to York. He went down to the start last instead of first this time. Jim usually gets off him down at the start but there was no need to this time – he was so calm.

“I think he’s exceptional at this trip, he just needs to be managed. We needed the Group 1 and it’s great to do it here.”

Crowley, an excellent third in the Arc on Ulysses, looked shell-shocked as he returned, hailing Battaash the fastest horse he has ever clung on to.

“It was an unbelievable performance,” said the rider, winning, importantly, a first Group 1 in his employer's colours.

“He broke well and was absolutely winging; they just couldn’t go fast enough for him. I ended up taking it up after a furlong and a half. With Battaash you’re just a passenger, it’s as simple as that.”

The result had a solid feel to it, with Nunthorpe winner Marsha running her usual spirited race to finish a four-length runner-up, and Profitable right on her tail in third.

The result was, however, tinged with a little sadness, with both Marsha and Profitable seemingly waving their farewell to the track.

“The plan all year was that Marsha goes to the December sales, so I would think that’s it,” said William Butler, assistant to trainer Sir Mark Prescott. “She’s been a superstar and we’ll have a job to find another one like her.”

Putting a value on Marsha, a dual Group 1 winner who finished out of the first three only twice in her career, is no easy job and there is sure to be some keen interest in the Elite Racing Club-owned four-year-old from the biggest commercial breeders on the planet.

Trainer Clive Cox said: “I was very impressed with the winner and I was thrilled to bits with my fellow. He’s confirmed his Group 1 standard and I’m very proud of him. I think that’s probably his finale. He’s been an absolute superstar.”

Stallion duties are, of course, out of the question for the gelded Battaash, although he will not run again until next season. After this mesmerising performance, it cannot come soon enough.

FIRST PUBLISHED 6:48PM, OCT 1 2017
We did everything in reverse to York. He went down to the start last instead of first this time