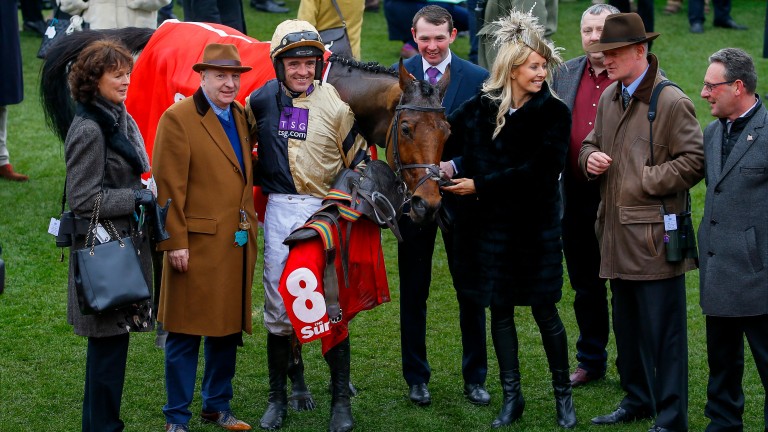 Ruby Walsh on Thursday reflected on the loss Nichols Canyon would be to jump racing and the Willie Mullins stable as he led tributes to the horse he rode to victory in this year's Stayers' Hurdle.

Nichols Canyon, the winner of eight Grade 1 races over jumps and two Listed races on the Flat, died of the injuries he sustained when he came down at the fifth flight of the Christmas Hurdle at Leopardstown won by Apple's Jade.

The obstacle, the last in the straight, had to bypassed while vets tried to save the horse.

Walsh said: "He's a big loss. It takes a good horse to win eight Grade 1 races so he will be hard to replace. He was as tough as nails."

Trainer Willie Mullins' son Patrick said: "He will be very, very hard to replace. He was a small horse with a big heart and would run through a brick wall for you.

"He was a character as well, he was always a very happy horse. We have had very few horses who have won the amount of good races he has."

Nichols Canyon raced on the Flat for John Gosden and on just his second start over jumps after joining Mullins he registered the first of his eight Grade 1s by landing the Royal Bond Novice Hurdle.

At his first Cheltenham Festival he finished third in the Neptune Investment Management Novices' Hurdle, for which he started favourite, and ended the season strongly by adding Grade 1 wins at Aintree and Punchestown.

The following season he produced a huge shock when inflicting a first defeat on 1-6 shot Faugheen in the Morgiana Hurdle, but found another stablemate too strong when third behind Annie Power in the Champion Hurdle and the Aintree Hurdle.

A Cheltenham Festival victory looked set to elude him until he was stepped up in the distance for the Stayers' Hurdle, in which he battled past Lil Rockerfeller to land the prize in March.

He was subsequently denied on the line by Unowhatimeanharry at Punchestown and had begun this season with a second place behind Apple's Jade in the Hatton's Grace Hurdle.

Paul Townend, who was aboard Nichols Canyon when he came down at Leopardstown, said: "I was lucky enough to win a Grade 1 on him and he was a great horse for the stable over the years."

David Mullins, another to enjoy success on the horse, said: "He was a fantastic horse and kick-started my career when I won the Morgiana Hurdle on him – that was my first Grade 1.

"The way he did it surprised me – he beat Faugheen and is still the only horse to do that. He's a horse I will never forget – he was tough and hardy. He was often second string but popped up frequently."