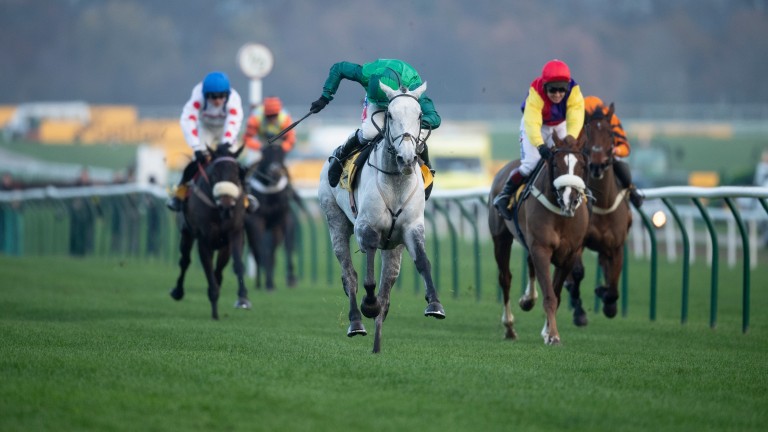 Oh ye of little faith. Those doubting Thomases who had lost their belief in Bristol De Mai were given an expensive lesson in the Betfair Chase.

With his relentless galloping style the grey had run his rivals into the ground in a decidedly muddy edition of this race last year, winning by half the length of the East Lancs Road.

Yet 12 months on he was almost an afterthought in the build-up, something of a bit player in all the hoopla surrounding the Cheltenham Gold Cup rematch between Native River and Might Bite.

There was even talk that he might miss the race due to ground concerns, a factor in his insulting 13-2 starting price in a field of five.

Any doubters laying those odds will have surely been converted to believers in the six and a half minutes it took to run the season's first Grade 1 race.

Daryl Jacob's mount did not get to dominate the head of affairs in the same way this time, surrendering the lead to Native River on occasions.

But there was no surrender once the seven-year-old hit the front again at the fourth last and he pulled clear before the final fence to come home a decisive winner. He had 'only' four lengths to spare this time, rather than last year's 57 lengths, but there was no doubting the authority of his success.

Trainer Nigel Twiston-Davies was not concerned that Bristol De Mai had become something of a forgotten horse before the race, saying: "There's more fun in life being the underdog.

"I was discussing that with Daryl on the way up here and when you're the one that shouldn't win – it reminded me of taking on Kauto Star and Denman [with Imperial Commander].

"When you're the underdog and then you go and stuff them, it's great. When you know you can't win, it's great when you do."

He added: "It was a superb ride by Daryl, he got the pace just right and had the rest struggling quite a long way out. He's a horse that busts the other ones and that's what he did."

Jacob added: "I'm absolutely chuffed to bits for the horse. He was completely forgotten about this year but thankfully our team had other ideas. He's given me his all out there today and I'm delighted for him."

Bristol De Mai is now unbeaten in four visits to Haydock but Twiston-Davies does not think the course is the key to his top-class stayer's success.

"I don't think it's the track," he said. "He's one of the best horses in the country but he's very fragile and keeping him 100 per cent right is the problem."

Now is when the hard work starts, as the trainer aims to keep Bristol De Mai in top shape to land a £1million bonus by adding wins in the 32Red King George VI Chase and Magners Cheltenham Gold Cup.

"He's always brilliant first time out," Twiston-Davies said. "When we win at Kempton and things like that, then that will be brilliant training. We're lucky, we have the best gallops in the world and we bring them here fit. We have to keep him right, that's the thing.

"I need to talk to the owners. I'm sure we'll be at Kempton as long as the horse tells us he's right and then perhaps Cheltenham at the end of January.

"He's had one less race this year so maybe he'll go to Kempton in absolutely storming form."

FIRST PUBLISHED 3:16PM, NOV 24 2018
When you're the underdog and then you go and stuff them it's great. When you know you can't win, it's great when you do

Cheltenham regular Native River 'performing as well as when he won the Gold Cup' Cheltenham squad may be smaller but don't write us off, says Joe Tizzard Brewin'upastorm readily accounts for McFabulous in Grade 2 at Fontwell 'He's a Grade 1 Mad Moose' - and that's his owner speaking! 'I still picture him powering up our gallops' - Tizzard ace Thistlecrack retires 'His jumping was deadly' - Gold Cup hope Champ runs a cracker behind Sceau Royal