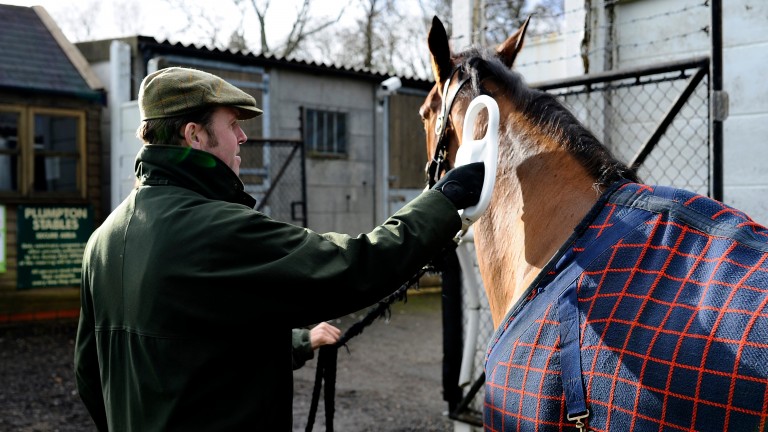 Scanning runners in the paddock must be introduced to avoid any further cases of mistaken identity
Alan Crowhurst
1 of 1
By Bruce Millington 8:00PM, AUG 2 2017

It's now one week on from the embarrassing mix-up that led to a three-year-old winning a race for two-year-olds at 50-1 at Yarmouth but, while the sport has climbed back to its feet and normal service is seemingly resumed, it is too early to put the fiasco behind us, forget about it and move on.

A BHA investigation continues but the regulator needs to ensure it does not rush to conclude that this was a one-off and we can all sleep comfortably in the knowledge that a repeat is almost impossible.

The language of its media release in the wake of the incident is not entirely encouraging in that regard. It states: “In the 18 years since we introduced the microchipping of horses this is the first time that such an incident has occurred.”

That’s because of a gaping flaw in the scanning procedure, which enabled this to happen and potentially enables it to happen on a daily basis.

Horses are scanned as they enter the racecourse stables. They are then allocated a box, in which they are housed until they are saddled up and sent from pre-parade ring to paddock to racecourse.

Most, but not all, winners are then scanned again if they have been selected for a drug test. But it is not remotely possible to say for certain that horses have not run in the wrong race in the 18 years since microchipping was introduced.

Because horses are not scanned - a simple process that involves an official running a hand-held device over the horse’s chip like an airport security guard might if you kept beeping as you went through the large scanner - between leaving their box at the racecourse stables and going out to race there is always a danger that runners could be inadvertently, or indeed deliberately, switched.

And while there is no evidence or indeed any credible suggestion that the confusion that took place at Yarmouth last week was anything other than an innocent if calamitous mix-up, it remains the case that horses could easily have been swapped by accident or design in the past.

And anyone thinking of, say, running a two-year-old against older horses to get their more senior stablemate better handicapped will be delighted to see how readily everyone accepted that what happened at Yarmouth was an unfortunate accident, albeit that a complete absence of money for the winner and zero other evidence of any skulduggery suggests that was indeed the case.

This was the first such incident to be detected but winners not chosen for a test and non-winners could easily have been the wrong horses.

So clearly the BHA needs to change the scanning procedure. But the same media release claims there is a significant cost implication to making the current procedure failsafe, which it patently isn’t as things stand.

“Potential solutions to reduce the small risk of this happening even further could come at a significant cost to the industry,” it warns.

It has been suggested that extra cost could run into a seven-figure sum, which sounds extremely high. In 2018 there are 1,508 scheduled fixtures, which means an extra £663 per meeting to scan horses in the paddock based on this additional annual cost of £1m.

How can it possibly cost £100 per race to scan the horses again? Where do I apply for the job if that figure is credible?

Currently the judge does a visual check in the paddock to make sure what the racecard claims are grey horses actually do have grey coats, geldings do not have fully working reproductive organs, bays are bays, etc. I am at a loss to grasp why they can't stop doing that and just run the scanner over each horse’s chip instead.

The BHA’s primary task is to ensure British racing is trustworthy and one of the basic ways of doing that is to assure punters the right horses are taking part.

It is currently impossible for anyone to be sure the horse in box 32 was not removed and saddled for the selling hurdle instead of the one in box 33 because the identification process is so poorly designed.

The system needs to be put right and the remedy needs to be done without costing anything like the absurd sums that have been mentioned.

Until then, it will not be possible to reflect on events of a week ago and avoid feeling an ongoing sense of discomfort.

Collective spirit, as mentioned in this column many times down the years, is the most underrated attribute a football team can either possess or lack.

While every commentator and pundit makes a big deal of the non-existent concept of momentum, it is motivation that can mean more than ability and have the biggest influence on how a team performs.

It must, therefore, have been little short of frightening if you are a Sunderland supporter to have seen the video of Darron Gibson criticising his team mates in a bar hours after the red-and-whites had been thrashed by Celtic in a friendly.

The Ireland midfielder questioned the commitment of a number of his colleagues and was scathing in his assessment of the team.

The worst thing a punter can do is react to unusual incidents like this and jump to obvious conclusions, which is exactly why I immediately backed Sunderland for relegation because my knees are annoyingly prone to jerking when a few moments of calm, rational analysis would be far more appropriate.

But in this case I’m happy with my bet. I believe it is impossible for teams to function at anything close to their optimum without a strong collective desire to succeed and to support one another in times of adversity.

The Crazy Gang, every team Fergie managed and Cloughie’s unlikely successes with unfashionable East Midlands clubs were all powered by the smell of team spirit.

By stark contrast, Gibson’s claims about the state of things at the Stadium of Light do not bode remotely well for the Mackems, who would be questionable value for the Championship crown at no bigger than 18-1 even if the early indications were that they had put last season’s feeble relegation behind them and found the resolve to put things right.

Simon Grayson, the new man in charge, seems a decent operator and maybe he will be able to use the Gibson video as a way of pressing the reset button and getting the club back on track.

But he appears to face a monumental task to revive the club and I’m happy to have backed them for relegation and to take them on in match bets and on the spreads.

And while on the subjects of happiness and ante-post bets on the new season it is gladdening to see Sky Bet offering extra places on the Football League title battles and they and bet365 betting to three places in the Premier League.