Titans can prove a nuisance to Ravens once again 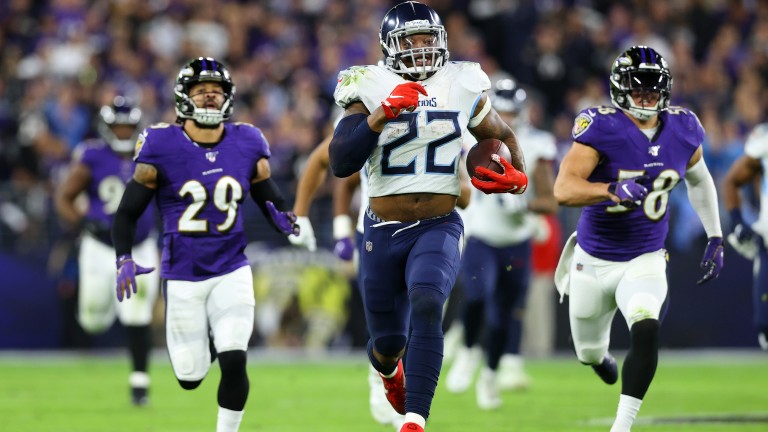 Free NFL picks, best bets and analysis for Week 11 of the 2020 NFL season.

Tennessee dashed Baltimore's Super Bowl dreams last season and they can make a nuisance of themselves again in a key contest for both teams on Sunday.

The 9-7 Titans stunned the 14-2 Ravens 28-12 in the divisional round of the 2019 playoffs, but both teams have more on their minds than thoughts of revenge.

These sides both suffered setbacks last week, with Tennessee letting a 17-10 lead slip in a 34-17 loss to Indianapolis to drop to 6-3. The Ravens fell to the same mark with a 23-17 defeat to New England in a game for which they had been seven-point road favourites.

Baltimore's offence is not the force of last season, and Tennessee's defence has been terrible at times, but the Titans can still call on running back Derrick Henry to lead their offence and a decent handicap start looks worth taking in a game that could be tight.

The Ravens have not lost back-to-back games since Week Four last season, but their home advantage has been reduced further with no fans allowed in to their stadium this week.

Green Bay were favourites for their trip to Indianapolis when the lines were first posted in Las Vegas, but the Colts are now favoured and that makes the Packers the more attractive pick.

The visitors have drifted due to doubts over their top receiver Davante Adams, who has missed practice time with an ankle injury. But quarterback Aaron Rodgers has grown used to working with thin resources with Allen Lazard - who could return this week - on the sidelines since Week Three.

The Colts did themselves a huge favour with their comeback victory over the Titans last week, but they had failed to score in the second half of their loss to Baltimore and this would be their most notable scalp of the season.

The Packers failed to cover - and only just avoided a shock defeat - against Jacksonville last week but their 7-2 record, with four wins out of five on the road, reads well and they look worthy of support as underdogs.

It's no surprise that few bookmakers have ventured to price up the AFC West clash between Kansas City and Las Vegas as the availability of much of the Raiders' defence will not be certain until gameday.

The team have been hit by a Covid-19 outbreak, which first affected their offensive line but has now led to a host of defensive players, including some key starters, having to self-isolate and miss practice.

The Raiders would have been fancied to give a good account of themselves against the Super Bowl champions in normal circumstances after winning four of their last five games, including a 40-32 win over the Chiefs in Week Five.

But no bet on the contest can be advised until we know what proportion of the Las Vegas starting line-up will be available.

Miami's credibility as playoff contenders will still be questioned by some despite their five-game winning run but their schedule remains favourable and they should win again in Denver.

Broncos quarterback Drew Lock's participation has been in doubt due to a chest injury and Denver have lost three of their last four games, pulling off a last-play score to deny the Chargers in the other fixture.

They have lost three of their four home games in an injury-hit campaign and don't look in shape to hold back the confident Dolphins.

Minnesota can condemn Dallas to their seventh defeat in eight games, even though the Cowboys are set to get second-choice quarterback Andy Dalton back this week.

Dallas have handed starts to rookie Ben DiNucci and former Browns practice-squad passer Garrett Gilbert in the last two weeks but they put up a decent fight against unbeaten Pittsburgh last week.

However, the Vikings, with NFC North wins over the Packers, Lions and Bears in their last three games, have their tails up and will be hard to stop.

FIRST PUBLISHED 12:32PM, NOV 21 2020
The Titans can still call on running back Derrick Henry to lead their offence and a decent handicap start looks worth taking