Tough-tackling Mack can be king of the sack

Raider to push towards his own high targets 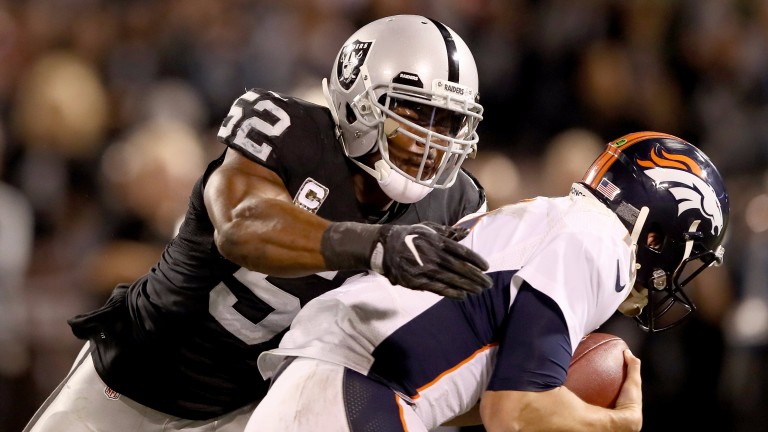 Oakland's Khalil Mack is fired up for the new campaign
Getty Images
1 of 1
By Ian Wilkerson UPDATED 9:01PM, SEP 6 2017

Having played just three games last season due to a neck injury, the NFL's best defensive player JJ Watt should have plenty of fire in his belly for the coming campaign.

The Houston defensive end has helped coordinate the fundraising of more than $20 million towards helping those in the city affected by Hurricane Harvey, an experience that could make him even more focused.

Watt is an outstanding performer but it takes a leap of faith to back him as a relatively short-priced favourite to be the league's sack leader - it was an honour he earned in 2015 - and there should be better value to be found elsewhere.

Coral and Ladbrokes offer a quarter of the odds for the first three places, which makes Denver's Super Bowl 50 MVP Von Miller an attractive each-way proposition at 10-1.

However, preference is to support Oakland's Khalil Mack to top the charts at the same price and build on his 2016 defensive-player-of-the year award.

Mack posted 11 sacks in Oakland's poor total of 25 but he made 15 the year before and is reported to be aiming to double that tally this season - the record for a regular campaign is Michael Strahan's 22.5 for the New York Giants in 2001.

Kansas City's Justin Houston came within half a sack of that tally three years ago but he is looking to bounce back from a cruciate-ligament operation.

If you are looking for a bigger each-way price then Chandler Jones of Arizona could represent a value bet.

He posted 11 sacks for the Cardinals last year after moving to the desert from New England, where he was responsible for 12.5 in 2015.

Jones is 40-1 with Paddy Power for outright glory but each-way at 25-1 is more than acceptable and provides some extra insurance in a competitive heat.

Seattle's Bobby Wagner is favourite in the most tackles and assists market after claiming the top spot last year when he became the first Seahawk to top 100 for five successive seasons.

He can be expected to put in another strong showing but there are injury reservations about other linebackers prominent in the market.

Carolina's Luke Kuechly is probably the league's best player in that position but he has had concussion issues while San Francisco's Navarro Bowman missed most of last season with an Achilles injury, which was the second major problem he has suffered in the last two years.

Atlanta's Deion Jones caught the eye with 106 tackles last term, which was the highest tally for a rookie and it will be no surprise if he improves.

However, preference is for Dallas's Sean Lee, who has shown great ability when back on the field following a succession of knee injuries.

His tackles and assists combined for a total of 145, the joint-fourth best tally in the league, and he can reward each-way backers.