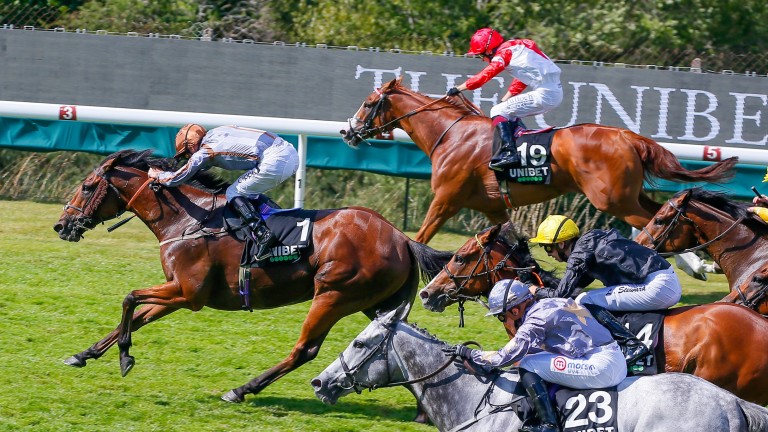 So often Summerghand has been the one just coming up short or denied in the final stages of the calendar's major sprint handicaps. This time, the gallant six-year-old took the prize with a dramatic late surge to deny Kimifive in a photo-finish.

Kimifive, with his flashy white face and socks, had burst clear on the far rail under Cieren Fallon, and another top sprint looked to be going the way of the star apprentice following last month's Group 1 July Cup victory on Oxted.

However, there is rarely a finish to the leading sprint handicaps that Summerghand is not involved in and this time, at last for his connections, it was he who stuck his head in front to score in the dying strides under Danny Tudhope.

The winning distance of a head was more than it had initially looked as the front two had crossed the finishing line, and the judge confirmed it was the topweight who had claimed the prize.

It was a second big handicap win of the week for David O'Meara, following the success of Prompting in the Unibet Golden Mile on Friday, but this one felt a little more special to the trainer, who has developed something of a soft spot for Summerghand.

"If there was a horse that ever deserved to win a heritage handicap this one did," O'Meara said. "He was beaten a nose in the Wokingham and there are so many big races like this he's hit the crossbar in and not had it quite his way.

"He really has hit the woodwork in every big race I can think of. He's owned by Rabbah and I'm so pleased for him and the owners. Everybody knows where they're at with him in terms of the handicap and he keeps turning up and running so well." 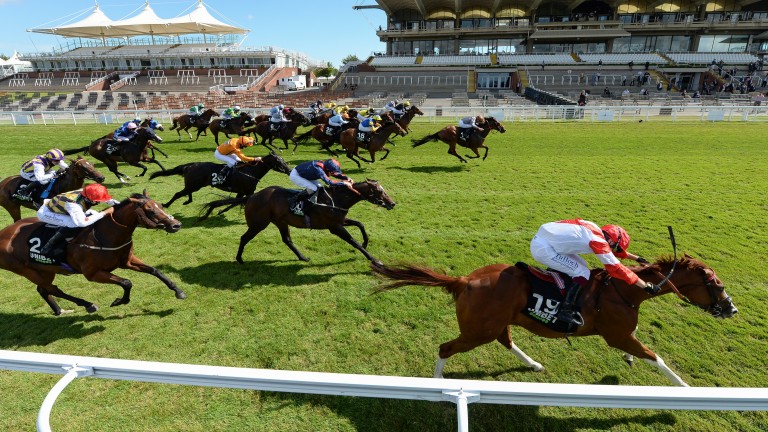 Such was O'Meara's desire to see Summerghand triumph in a race such as the Stewards' Cup that he confessed to being struck by second thoughts and some doubts about whether running the six-year-old at Pontefract last month might scupper his chances for good, only for Rabbah Bloodstock's racing manager Bruce Raymond to reassure him all would be okay.

The trainer said: "I spoke to Bruce Raymond just before we went to Pontefract with him as I was worried that winning there, as he was entitled to do, would compromise his chances of winning a race like the Stewards' Cup. Bruce said kick on and we'll worry about the Stewards' Cup when that comes, and he was absolutely right. I'm delighted for them."

Such was the closeness of the finish, Tudhope admitted he was uncertain whether he had managed to get up or whether it was another glorious failure from his willing partner.

"I wasn't sure I'd won so I had to have a look across to see for sure," he said. "I've been involved in this race a few times and never got close to winning, so it's nice to come here and be able to ride the winner. It shows how good he is to keep coming back and running like he does in these handicaps."

The week in numbers

While O'Meara and Tudhope were able to finally celebrate, the result of the photo-finish proved to be a blow to trainer Joe Tuite, who had initially been convinced Kimifive had held on.

"Talk about going from ecstasy to agony!" Tuite said. "If you'd have told me before the race we'd have been second beaten a head I'd have taken that, but when it actually happens it's a case of 'oh no'.

"The horse has done everything right and has come through to win and he's just ended up being beaten by a very good horse. The kid's given him a super ride and the horse really deserves to win a big race like this, so it's heartbreaking really as they make such a difference.

"He's a talented horse and I hope he can get what he deserves in a race like this."

Having secured the Stewards' Cup, O’Meara is keen on plundering another top sprint with Summerghand.

"I'd love to win the Ayr Gold Cup with him," he said. "It's a race we've won before with Louis The Pious and I think this horse has it in him to win the race too."

FIRST PUBLISHED 3:45PM, AUG 1 2020
The kid's given him a super ride and the horse really deserves to win a big race like this, so it's heartbreaking really

'Have I won, have I not won? Have I been beaten half a length? What's going on?' 'There's some encouragement for Cheltenham': Keith Melrose's must-watch replays Grand old Duke Of Firenze bids to roll back the years again for Griffiths 'The more I run her, the better she is': Millisle out to bag another Group 3 Gary Moore fined for breaching coronavirus regulations at Goodwood Mohaather the joint-highest rated horse in training following Sussex swoop