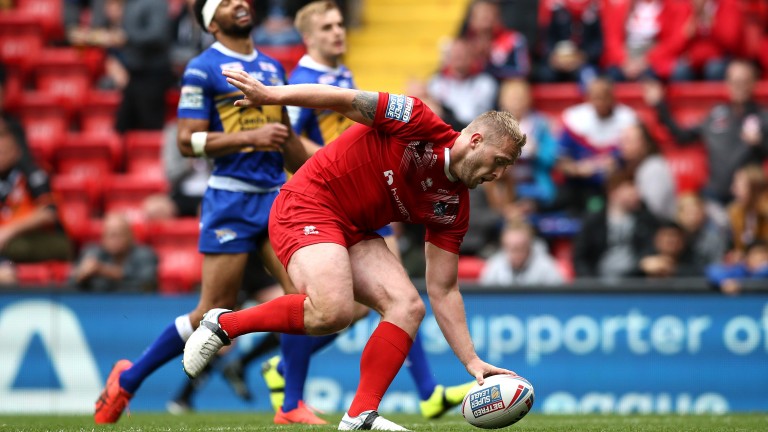 London Broncos ace Jordan Abdull touches down in the Betfred Super League clash with Leeds on Magic Weekend at Anfield in May
Jan Kruger
1 of 1
By Rod Studd UPDATED 12:11PM, SEP 13 2019

Friday the 13th will be unlucky for someone in the Betfred Super League with London, Hull KR, Huddersfield and Wakefield all scrapping for survival on the regular season's final night.

The teams are tied on 20 points and one will fall through the trapdoor to the Championship – whoever it is will have posted a record number of points for a relegated club.

London were four minutes from going down a week ago but Jay Pitts' match-winning try at Hull KR enabled them to live to fight another day at Wakefield.

The pre-season relegation favourites must win at Belle Vue to stay up and they are still 1-2 for the drop with Hull KR 5-2, Trinity 11-1 and Huddersfield 16-1.

Wakefield were third at the season’s halfway point but have won just twice in 14 attempts in the league and it would be a brave punter who backs them at 1-2 to beat a Broncos side who have frequently defied the odds in 2019.

Danny Ward’s men can boast two big wins over Wakey at home and have recorded four victories on their travels this year.

They have rewarded handicap backers ten times in 13 away games and make considerable appeal with an eight-point start at Belle Vue.

All the crucial games are being played simultaneously and that could aid the Broncos and their backers. Wakefield know they will be safe if either Huddersfield or Hull KR are beaten and if the Giants or Rovers are trailing heavily late on, Trinity could be forgiven for losing focus on their own match.

Huddersfield look to have a hand-picked fixture at home to an injury-hit Catalans side who have nothing to play for. The Dragons have lost their last four games by an aggregate of 135-30.

It's a worry that the Giants haven't won at home since May and have failed to score a point in their last two outings in front of their own fans, but they ought to be able to overcome a six-point handicap.

On paper Hull KR have the toughest task as they travel to Salford. The Red Devils are bound for the playoffs having won their last seven games.

Rovers will almost certainly go down if they lose and London win and they are afforded an eight-point start on the handicap.

That may be sufficient given KR's desperation and their reasonable record against Salford this year.

They won at the AJ Bell Stadium in the Coral Challenge Cup while the two Super League games were both settled by two points with the sides winning a match apiece.

St Helens, who have flown clear at the top of the table, travel to Hull and Leeds host Warrington.

Wigan secured second place in the table with a 26-8 win over Castleford on Thursday, which left the Tigers in danger of losing the final playoff spot to Hull.