Connacht have a fighting chance from weak pool 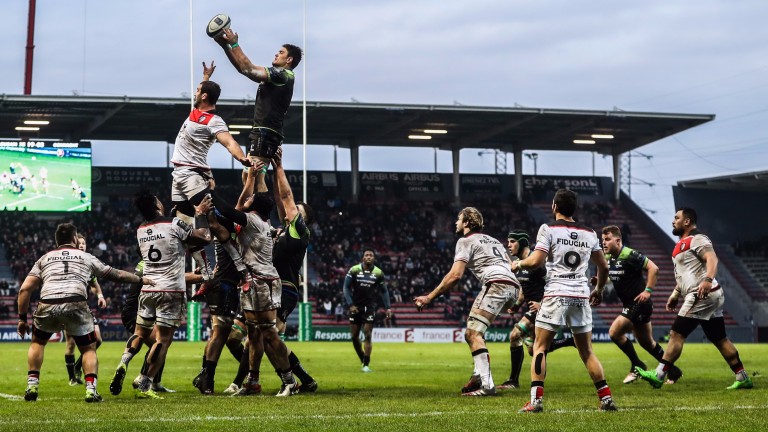 Toulouse and Connacht did battle in the Champions Cup last season
INPHO/Tommy Dickson
1 of 1
By Graham Woods UPDATED 8:24PM, OCT 12 2017

Best bet
Toulouse 5-1
There has been a French resurgence in the European Challenge Cup in the last two years and that could continue this season as Top 14 giants Toulouse line up in the second tier for the first time.

The four-time European champions missed out on a 23rd consecutive season competing with the elite of the continent after a disappointing 12th-place finish in the Top 14.

But they're now a huge fish in the smaller pond of the Challenge Cup, and while French clubs can't always be relied to give their all, Toulouse's reputation is surely far too great for them to dismiss this tournament.

Just four clubs are available at single-figure odds, three of them French, while 2015 winners and last year's runners-up Gloucester are 100-30 favourites.

That's understandable given their recent successes and straightforward draw, alongside middling French clubs Agen and Pau plus Zebre of Italy, but they haven't convinced this season after losing key players in the summer and have a raft of injuries.

Toulouse's pool rivals are a stronger bunch, comprising Top 14 leaders Lyon plus former winners Sale and Cardiff. But Lyon are not guaranteed to stay the course while the Sharks and Blues have made patchy starts despite the quality in their ranks.

Holders Stade Francais are prominent in the betting at 11-2 but haven't started well - Toulouse have already put 50 points on them - while high-flying Bordeaux were hit-and-miss in the Champions Cup last season, and after that leading quartet there's a big jump to a pack of 16-1 shots.

Best outsiders
Connacht 18-1
Even at this level, a step down from the European Champions Cup, pedigree still counts for a lot and big guns have dominated over the last decade. Four of the last six winners have been Champions Cup/Heineken Cup finalists or better.

But for a speculative each-way chance, Connacht could be worth backing to hit their stride after a difficult start in the Pro14 as they find themselves in the weakest pool of the lot.

The Irish outfit have only one win to their name, but they are thrown in with Oyonnax and Brive, who have also won only one game each, plus winless Worcester.

Unlike those three sides, Connacht are not faced with the threat of relegation and have always put a lot into their European efforts - they beat Toulouse and Wasps in their Champions Cup pool last season and reached the quarter-finals of the Challenge Cup the year before, edged out by one point in Grenoble.

They have improved each week in the Pro14, battling hard in some close-fought defeats, and should have enough to top their weak section. With a decent points haul, a home quarter-final opens up possibilities.

There are odds-on favourites in all five pools but the ones who could be worth taking on are holders Stade Francais.

The Parisians lifted the trophy last season having qualified for the knockout stage as eighth seeds, finishing second in their section to Edinburgh, who look value to pip them again.

Stade lost four of their five opening Top 14 fixtures this season, and although they have won their last two, the most recent came against a Montpellier side resting all their big guns and they don't yet look convincing.

Edinburgh have had their wobbles after a strong start but head coach Richard Cockerill has plenty of European knowhow to boost a team who have topped their section in two of the last three seasons, winning 14 of 16 pool matches.

Premiership strugglers London Irish and Russian side Krasny Yar make up the numbers.