Chelsea may find it hard to cage the Canaries

Norwich can keep it tight at the Bridge 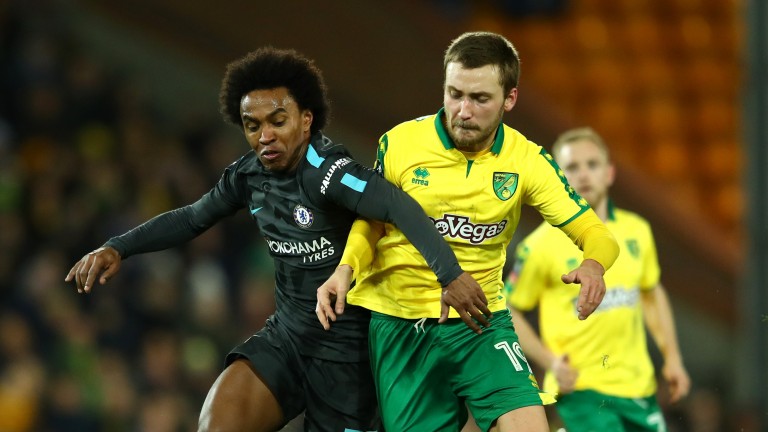 Chelsea have drawn all four of their matches in 2018 and their unconvincing start to the year may continue in their FA Cup third-round replay with Norwich at Stamford Bridge.

The threat of elimination has reduced since Chelsea drew 0-0 at Carrow Road but the Blues do not look like banker material against a Norwich side who are unbeaten in five games and playing with increasing confidence.

Chelsea's lacklustre January continued on Saturday when they were fortunate to escape with a 0-0 draw at home to Leicester.

Antonio Conte stated the obvious in the post-match interview by conceding that a lot of his players were tired.

And the Italian is likely to give his star players a breather to recharge them for Saturday's Premier League match at Brighton and next Wednesday's League Cup semi-final second leg at Arsenal.

Chelsea's line-up is likely to be similar to the one deployed at Carrow Road when first-choice stars Thibaut Courtois, Cesar Azpilicueta, Victor Moses, Marcos Alonso, N'Golo Kante, Cesc Fabregas, Eden Hazard and Alvaro Morata were left out of the starting line-up.

The largely second-string Blues side looked disjointed in Norfolk and were given a fairly easy ride by Norwich, who seemed more concerned with securing a replay than going for the throat.

Winning away from home will be tougher for the Sky Bet Championship side and they go into battle without classy attacking midfielder Alex Pritchard, who completed an £11m move to Huddersfield last week.

However, they began life without Pritchard with a 1-0 victory at second-tier highflyers Bristol City - taking them up to 13th in the league and only six points adrift of the playoffs.

Highly-rated attacker James Maddison won the game for them at Ashton Gate with a superb long-range strike and could soon be the next player to depart after attracting plenty of top-flight attention.

But Maddison remains with the Canaries for the time being and his desire to impress potential suitors is something the Blues defenders will need to be aware of.

Chelsea's fringe players will also be looking to impress as they seek to put pressure on the stars who struggled so much against Leicester.

Willian and Pedro are quality players in attack and would be regulars in most top-flight sides and are obvious dangers to a mid-table Championship outfit but Ross Barkley won’t be able to make his debut as he didn’t sign for the club in time for the original tie.

However, anyone who watched Chelsea labour to a 0-0 in the original match would have doubts about backing them at long odds-on.

Another closely-fought match is on the cards and there is value in backing the visitors in receipt of a 1.5-goal Asian handicap start at odds against.

Chelsea
Ross Barkley cannot play as he was signed too late to be eligible. Gary Cahill and Cesc Fabregas are out with a hamstring injuries.

Norwich
Cameron Jerome is close to sealing a move to Derby and won't be involved. New loan signing Marcus Edwards is ineligible because he wasn't registered at the time of the first match. Tom Trybull is sidelined by a knee injury.

Key stat
Norwich have conceded one goal in their last five games.