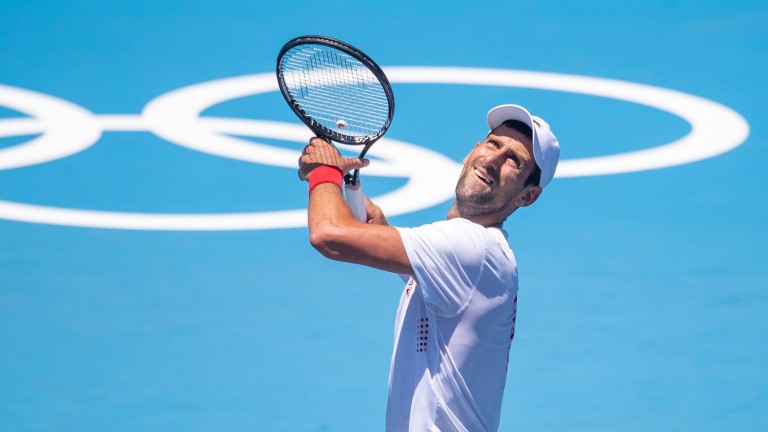 Novak Djokovic is in sight of making extra-special history this year and the world number one is likely to be difficult to stop
Tim Clayton - Corbis
1 of 1
By Adrian Humphries UPDATED 3:32PM, JUL 22 2021

Free tennis tips, best bets and analysis for the Olympic men's singles tournament which starts in Tokyo on Saturday.

Novak Djokovic has never won Olympic singles gold, but while the super Serb seems quite capable of putting that right in the coming days there's an even bigger reason to support him to shine in Tokyo.

Djokovic, already victorious in the Australian Open, French Open and at Wimbledon this year, will be well aware that he has a big chance to land a historic calendar Grand Slam and taste Olympic glory too - and a Golden Slam would all but end debates as to who is the greatest tennis player there has ever been.

He is 15-8 with Betfair and Paddy Power to win Olympic gold and the US Open, which starts in late August.

With Rafael Nadal and Roger Federer skipping Tokyo, some punters may be on the lookout for an outsider to go deep at the Ariake Tennis Forest Park but it's much likelier that a couple of short-priced seeds will contest the final.

It seems that only second seed Daniil Medvedev at his best could pose problems for Djokovic back on the world number one's favourite hardcourts. But just when some observers reckoned the Russian could deny the Serb in his favourite Slam tournament in Melbourne in February, Djokovic defeated him 7-5 6-2 6-2 in the Australian Open final.

Medvedev, winner of three of his last five clashes with Djokovic, could and will threaten the main man again before long. But the top seed could be of the mindset that he will have to knuckle down in just two more finals to make the history and he's quite capable of doing that.

Andy Murray, a one-time member of the original Big Four, has travelled to Tokyo but unfortunately for Britain's best-ever player he has been drawn against Felix Auger-Aliassime, who even after just one match has the feel of something of a nemesis to the Scot.

Murray may not be totally out of it, but he's finding it hard to hit former heights since his career-threatening hip injury and he looks a longshot to defeat the brilliant Canadian youngster.

Stefanos Tsitsipas and Alexander Zverev are seeded third and fourth respectively in the singles and could play a major part in proceedings. But it may pay punters not to overrate the chances of French Open finalist Tsitsipas back on hardcourts after his fine clay campaign.

Zverev may have only musclebound Australian Open semi-finalist Aslan Karatsev to beat to reach the semis, but Tsitsipas could find problems from the outset with tough matches in store against Philipp Kohlschreiber and then possibly Frances Tiafoe, Ugo Humbert or Miomir Kecmanovic, Diego Schwartzman or Karen Khachanov, and Medvedev or Auger-Aliassime.

FIRST PUBLISHED 3:10PM, JUL 22 2021
Just when some reckoned Medvedev could deny the Serb in Melbourne in February, Djokovic defeated the Russian 7-5 6-2 6-2 in the Australian Open final