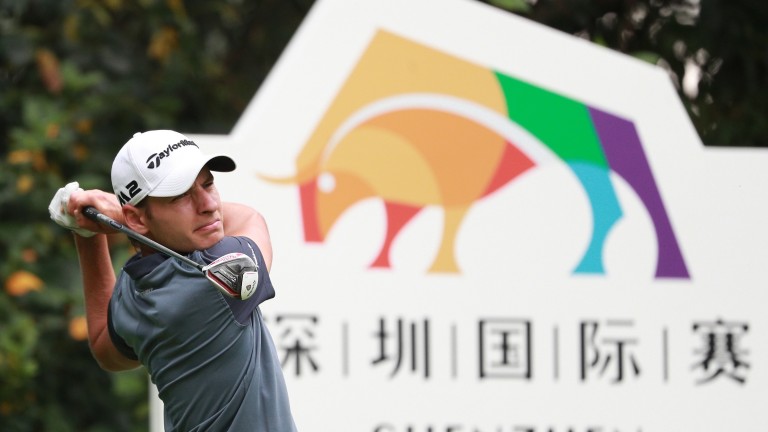 Joakim Lagergren has found some superb form with his driver
Zhong Zhi
1 of 1
By Steve Palmer UPDATED 11:31AM, SEP 23 2020

Golf tips, best bets and player analysis for the Irish Open at Galgorm Castle on the European Tour.

Live on Sky Sports Golf from 1pm on Thursday

Shane Lowry, enjoying an extended reign as Open champion, gets the chance to tee up this week about a 40 minutes' drive south of where he claimed the Claret Jug two summers ago.

The hero of Royal Portrush will be gutted that no galleries can attend his return to the island, so it will feel a lot different to that spectacular Open, and Lowry will also be concerned that his game is not in good enough shape for him to be a contender.

The 33-year-old Clara man was trying to talk positively after finishing 43rd in the US Open on Sunday, but his post-lockdown form has been generally dire aside from sixth place in the WGC-St Jude Invitational. The Irish Open favourite has been experimenting with equipment changes and after seven long months Stateside he makes no appeal at short prices for his homecoming.

The Challenge Tour has staged an event at Galgorm Castle every year since 2013 and players who have competed on the course before can get off to a flyer this week. Joakim Lagergren won his only Challenge Tour title on this track and the 28-year-old Swede could end up king of the castle again.

When Lagergren turned up for the 2014 Northern Ireland Open, he was close to falling outside of the world's top 1,000 and had gone 26 months without a top-ten finish anywhere, but he fell in love with Galgorm on his first visit.

After opening with a 62, Lagergren went on to secure a courageous one-shot victory to stabilise his career, progressing to become a European Tour champion with a playoff success in the 2018 Sicilian Open.

The Swede, who will be comfortable in the chilly weather forecast for this week, has a 100 per cent record at Galgorm, having never needed to play in the Northern Ireland Open since his triumph, and some bright recent form indicates he could deliver another perfect result there.

Lagergren did not tee up much on the UK Swing, missing the cut by a shot in the final leg, the UK Championship, then he headed to Valderrama and did extremely well to finish 24th on a course which does not play to his strengths. It was an eye-catching statistic that this attacking, often wild character, finished sixth for driving accuracy at the tight, tree-lined Sotogrande venue.

Next time out, Lagergren was 11th for driving accuracy on his way to finishing third in the Portugal Masters, where he closed with a 65. This resurgence off the tee bodes extremely well for Galgorm, a fairly tight track with juicy rough, and the beers could be on Lagergren backers come Sunday evening.

Last season the Northern Ireland Open became the ISPS Handa World Invitational for a year, with only three rounds at Galgorm and the other at the Massereene Club, 20 minutes' drive south. Jack Senior handled the assignment best, winning a playoff for a second Challenge Tour victory.

Senior's first CT title came in Scotland in 2015 and the popular 32-year-old Morecambe man, a two-time champion on the EuroPro Tour, has a strong record in the UK and Ireland. He won the 2011 Lytham Trophy, then took 2.5 points from four matches in the Walker Cup at Royal Aberdeen that year, losing only to Jordan Spieth.

This season, Senior has stepped his game up a level, surging into the top 200 of the world rankings for the first time after fourth place in the South African Open in January. He has stayed there ever since, consistently banking healthy cheques, and 14th place in the Portugal Masters last time out, topped off with a Sunday 64, means Jack the lad looks a serious threat to all at Galgorm.

The accurate Aaron Rai should appreciate the dimensions of Galgorm, where he finished 23rd on his only previous visit in 2016. He was a CT rookie maiden going into that NI Open - and was dealing with the disappointment of finishing runner-up in the Le Vaudreuil Challenge the previous Sunday - but he has since developed into a champion.

Rai won three times on the CT in 2017, then the 2018 Hong Kong Open on the European Tour, fending off Matt Fitzpatrick. Rai won a 2015 EuroPro Tour event in Scotland and his penchant for wearing two gloves will come in handy in the cool temperatures forecast for Ballymena. The 25-year-old Wolverhampton man showed a touch of class when finishing 12th in the 2019 WGC-St Jude Invitational and rock-solid UK Swing form figures of 21-10-44-31-44-15 make Rai worthy of great respect for Galgorm.

Complete a four-pronged attack with Clement Sordet, a four-time Challenge Tour champion looking to get a slightly faltering career back on track at the age of 27. The first of the Frenchman's CT triumphs came at Galgorm in the 2015 NI Open and his course form reads 1-6-34.

Limited status has meant only four post-lockdown European Tour starts, but 17th place in the British Masters and 21st in the Wales Open last time out were encouraging efforts. Sordet is too good to be kept off the circuit for long and this happy hunting ground could provide a spark.

Laurie Canter
The Portugal Masters runner-up must be shortlisted, but a lack of silverware on his mantelpiece must be starting to dent the confidence of the 30-year-old Bath man.

Calum Hill
The Scot is a three-time Challenge Tour champion and the first of those titles came at Galgorm. He needs to overcome some shaky current form to be a factor there again.

Garrick Higgo
The South African youngster won the Portugal Open last week, having finished seventh at Galgorm in the NI Open earlier this month. It was a tiring two-round Sunday in Portugal, though, and his only other Galgorm round was a 76. The weather may not be his cup of tea either.

Jason Scrivener
The accurate Aussie has been in solid form and should enjoy this layout, but he is making his debut and may need time to settle.

Course overview Galgorm Castle, just 30 minutes from Belfast, hosted the Northern Ireland Open on the Challenge Tour from 2013 through 2018, then again at the start of this month. Last year the Challenge Tour event at this venue was called the ISPS Handa World Invitational, with one of the four rounds taking place on the nearby Massereene track. Simon Gidman designed Galgorm Castle and it opened in 1997. The layout is bordered by two rivers which come into play on numerous holes, as well as five lakes. It is unusual for punters to have such a recent competition from which to judge the track - 13 under par was the winning score in the NI Open on September 6, with the champion, Tyler Koivisto, level par for the front nine and 13 under for the back. The CT event was not played off the back tees, with a total yardage of 6,993, so it should be tougher for the European Tour raiders. The rough is juicy and the fairways are tight, and the winds have a tendency to swirl at this venue. There are only two par-fives - both on the back nine - the tenth and the 18th

Weather forecast Cool throughout and generally cloudy, with sunny intervals and periods of drizzle. Calm for the most part, with the breeze picking up a little for the denouement on Sunday afternoon

Type of player suited to the challenge A mixture of players have succeeded in the NI Open at this layout, but the healthy rough and tight fairways encourage investments on accurate operators