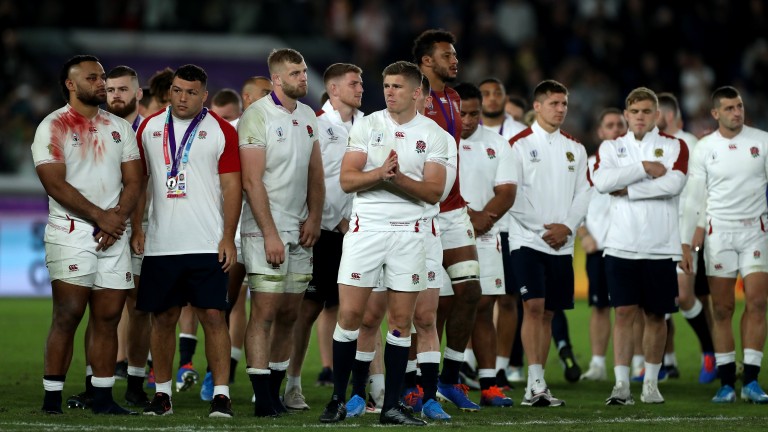 The England team after their World Cup final defeat to South Africa
David Rogers
1 of 1
By Rob Sutton 5:35PM, FEB 2 2020

The 2019 World Cup provided a mixed bag for the northern hemisphere teams.

England made it to their first final since 2007 before being taken apart by South Africa. Having edged out France in the quarter-finals, Wales had also found the Springboks too powerful in their semi-final.

Ireland surrendered top spot in their pool which left them on a collision course with New Zealand in the quarter-finals, while it was an early flight home for Scotland and Italy.

Here is what each team took away from their time in Japan.

Eddie Jones faced an awful lot of criticism in the 18 months leading up to the World Cup but he answered those doubters in some style. Jones produced two outstanding game-plans to see off Australia in the quarter-final and New Zealand in the semi-final.

South Africa proved a bridge too far in the final but Jones could not have planned for losing Kyle Sinckler so early in the match as the Springboks mercilessly targeted his replacement Dan Cole.

It was a fear for many Welsh supporters before the World Cup that they would not score enough tries but they ended up producing the top tryscorer of the tournament.

Josh Adams scored seven tries, including a crucial hat-trick when Wales were in trouble in a pool match against Fiji.

Adams' haul puts him in esteemed company - only Bryan Habana and Jonah Lomu have scored more in a single World Cup. He is sure to be at the forefront of Wayne Pivac's plans.

2018 was a glorious year for Irish rugby. Leinster were European champions while Ireland won a Grand Slam and toppled the All Blacks to take the number one spot in the world rankings.

But they never recovered from a home defeat to England in the Six Nations at the start of the 2019 Six Nations, and they were then humbled by the same opposition 57-15 in a warm-up match.

Defeat to Japan meant Ireland lost control of their pool and despite comfortably winning their other three games they faced New Zealand in the quarter-finals.

A repeat of their Dublin or Chicago heroics was never likely as New Zealand blew them away with a ruthless display. A reset with a new head coach might not be the worst thing for Ireland.

Just as they did in recent Six Nations campaigns, Scotland promised a great deal in some fixtures but they couldn't piece it all together when it really mattered.

Their final pool fixture against Japan rather summed up Gregor Townsend's time in charge.

Falling behind 28-7 early on in the second half, Scotland produced some great rugby to get themselves to within seven points of the hosts. But they ultimately could not finish the job and ended up eliminated at the earliest stage for the first time since 2011.

Playing for the full 80 minutes has to be high on Townsend's priority list for 2020.

France's indiscipline cost them a place in the semi-finals. The warning signs were there for Jacques Brunel when France fell apart in their opening pool game against Argentina, only holding on for victory thanks to missed kicks.

Sebastien Vahaamahina's red card against Wales fell into the indefensible category and while the French defence held firm for a time, playing with 14 men against a team of Wales' quality proved a step too far.

New coaches Fabien Galthie and Shaun Edwards will be hoping to stamp that out of the French players.

It was hard to take much from Italy's World Cup campaign. They comfortably saw off Namibia and Canada, were beaten by South Africa and had their fixture against New Zealand called off due to Typhoon Hagibis.

Conor O'Shea has departed to take up a position in the RFU and that is a blow for the Italians. Despite not getting the results on the field, O'Shea did an awful lot of good work off the field to make the Azzurri more competitive.

Franco Smith is in temporary charge for the Six Nations and will look to build on the good work done by O'Shea if given the job on a permanent basis.