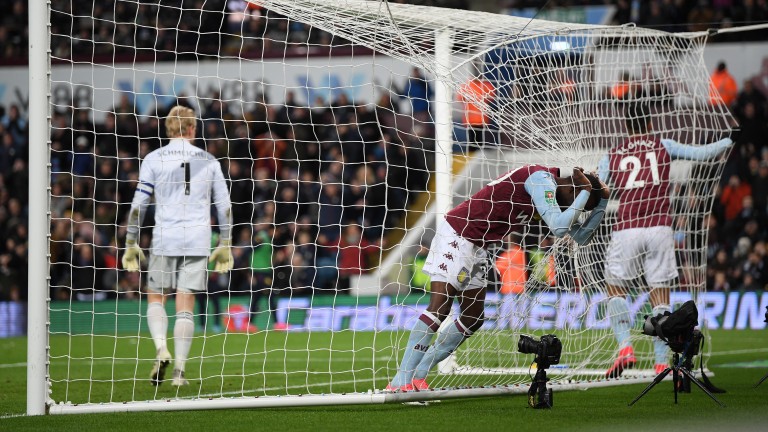 Aston Villa's Mbwana Samatta has ended up in the net more often than the ball
Shaun Botterill
1 of 1
By Henry Hardwicke 4:18PM, JUL 11 2020

Aston Villa
Goalkeeper Tom Heaton and full-back Matt Targett will miss the game while Bjorn Engels is a doubt.

Aston Villa are running out of time to avoid returning to the Sky Bet Championship and they could sink deeper into trouble against Crystal Palace.

Villa haven't won a Premier League match since their 2-1 victory over Watford in January and they have picked up just two points from their last ten games.

Dean Smith's side have looked toothless going forward and whoever starts in attack can't seem to improve a run which has seen the Villains score just two goals in their last eight Premier League matches.

That's a shocking return of both points and goals for a side who invested heavily in their squad following their return to the Premier League.

Villa's supporters will be hoping that Palace's motivation might not be at its highest, given the Eagles are safely tucked away in mid-table, but there was little sign of Roy Hodgson's side slacking in a spirited 3-2 defeat to Chelsea on Tuesday.

Smith's men were also fairly well-organised in a 2-0 defeat at Anfield last weekend but they were unable to find the net and champions Liverpool picked them off with ease.

Palace don't have the same sort of firepower that the Reds have at their disposal but Wilfried Zaha and Jordan Ayew could cause a shot-shy Villa side problems on the break.