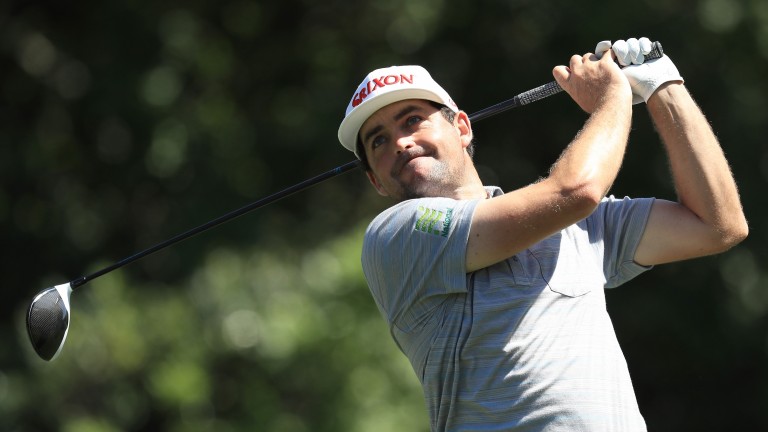 Keegan Bradley struggled with his putting yesterday
Getty Images
1 of 1
By Steve Palmer 10:10AM, MAY 2 2021

Keegan Bradley and Sam Burns both bogeyed the 18th hole in round three of the Valspar Championship, but the pair remain joint-leaders going into Sunday, reaching 14 under par through 54 holes.

Bradley, 75-1 ante-post, and Burns, available at 90-1, were four shots clear of the rest of the field after two rounds, and Burns eagled his first hole on Saturday. They laboured heading to the hut, though, allowing Max Homa to close the gap to just one shot for the denouement.

Homa is three shots ahead of those tied for fourth place - a pack which includes Presidents Cup stars Abraham Ancer and Joaquin Niemann - but the pre-tournament market leaders are tailed off.
Dustin Johnson is level par, 14 shots off the pace, while Justin Thomas is eight shots behind Bradley and Burns in a share of 18th place.

The Copperhead Course is drying out and some breezy conditions could await the leaders on Sunday, so the final round of the Valspar Championship seems set to be a war of attrition.

History suggests Sam Burns will struggle with the assignment and he did nothing in his post-round interview on Saturday to indicate that he is likely to hold it together under Sunday pressure.

Of course, the more Burns contends, the more used to the inevitable tension he gets, but he was angry and tetchy when speaking after round three, and clearly riled by an antagonising final question.

"What was the last tournament you did win?" said a reporter to a stunned Burns. "I'm not really sure," came the reply. "Back in college?" poked the interrogator further. "No, I've won professionally," growled Burns before storming off.

The Savannah Championship in April 2018 - on what was then the Web.com Tour - is the answer that both the reporter and Burns should have known. He has won at the grade below the PGA Tour, but has failed to sustain his form for 72 holes on the main circuit.

Burns was long-time leader in the Genesis Invitational at the end of February, streaking clear after rounds of 64 and 66, but a Saturday 74 derailed him and he ended up losing the tournament by a shot. He set the pace in the Houston Open in November, then closed with a 72 to finish seventh.

In previous final rounds of the Valspar, Burns has signed off with rounds of 73 and 74. He is only 24 and obviously has plenty of time to improve, but there appears to be a lack of comfort in contention at the moment.

Burns has spoken about making a conscious effort to take more time over shots when contending, which means the final pairing, like it was on Saturday, is likely to be the slowest coach on the track. Keegan Bradley, who has always been fond of putting the brakes on, will be alongside Burns for the second day running.

Bradley started missing short putts on the back nine in round three - his old bugbear scratching away at his confidence - and the chip-in eagle at the 14th papered over the cracks of his flat-stick demons.

Having rolled putts in well over the first two days, the stroke became ugly on Saturday. Bradley has a history of fast starts and slow finishes in the Valspar - and that trend may be further bolstered this week.

The advice yesterday morning was to back Max Homa at 14-1 - and a press-up at 5-2 is recommended prior to round four. Homa, in contrast to Burns and Bradley, was all smiles in his post-round interview. In fact, the 30-year-old has matured into one of the most relaxed operators on the PGA Tour.

Homa is one of the most popular players on the circuit and has enjoyed the full backing of the galleries in Florida - the state where he has made his home. The fans have been loving his putting form - Homa has been rolling them in from all parts - and he described himself as "ready and comfortable" for the final round.

Recent success has built self-belief in Homa. He has won the 2019 Wells Fargo Championship and the 2021 Genesis Invitational since his previous Valspar visit - both at tough ball-striking layouts like this one. The increased difficulty of Copperhead for Sunday plays into Homa's hands - his three-wood has become such a dependable tool off the tee.

Homa has had world rankings of 765th, 272nd and 434th for his three previous Valspar starts, missing the cut on each occasion, but he returned this week as number 41. He is a different beast these days - cool, calm and confident - and a third PGA Tour title seems within his grasp.

Bradley and Burns are scheduled to tee off at 7.05pm UK and Ireland time. Homa is alongside Ted Potter at 6.55pm.