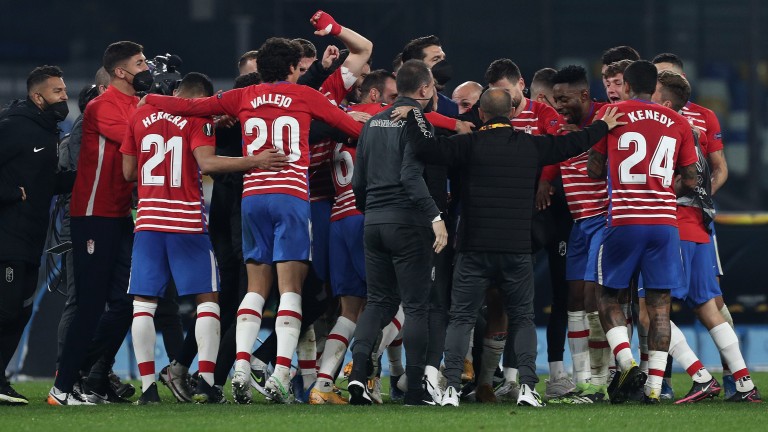 Granada
Quini is ineligible while Luis Milla and Luis Suarez are injured.

Manchester United were 4-0 aggregate victors against Real Sociedad in the Europa League round of 32 – doing all of the damage in the away leg - and they can enjoy themselves against another La Liga side, Granada, in their quarter-final first-leg clash in Andalucia.

United's strong showing against Sociedad was delivered in Turin due to travel restrictions but they have been cleared to compete at Granada's Estadio Neuvo Los Carmenes. where Napoli lost 2-0 in February.

Granada's 3-2 aggregate success over Napoli in the round of 32 stands out as the highlight of their debut European campaign, which has exceeded expectations.

The Andalusians followed up with a 3-2 aggregate triumph over Molde but the clash with United is a step up in class and they approach the first leg with a lack of confidence after Saturday's 3-0 loss at home to Villarreal, which left them ninth in La Liga.

Hopes of qualifying for another European campaign have faded after five losses in their last seven league fixtures and head coach Diego Martinez's plans for the United contest will not include Colombian international striker Luis Suarez, who has missed the last two months with a muscle injury.

Former Tottenham striker Roberto Soldado could be asked to lead the line but the 35-year-old looks a diminished force having failed to reach double figures in a league campaign since 2012-13.

United carry the greater threat despite the absence of Anthony Martial and are likely to be fully focused on keeping alive their last pathway to silverware.

They responded well to a difficult situation at the weekend – coming from behind to win 2-1 at home to Brighton – and their contest with Granada should be more straightforward.

Manchester United have lost one of their last 15 away games.