Gunners on top but remain shaky at the back 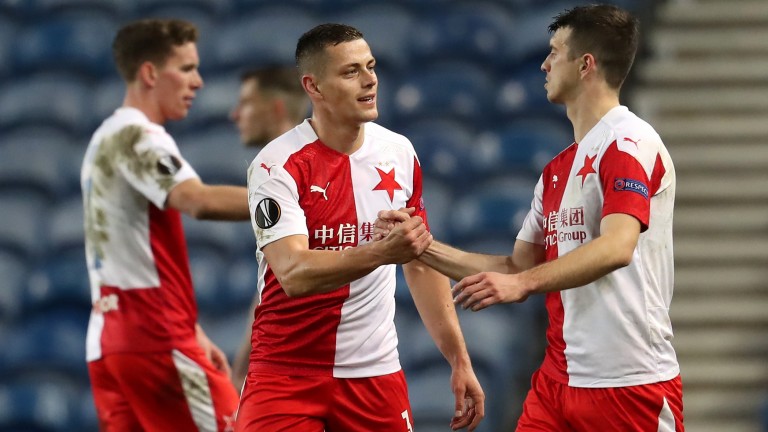 Arsenal
Kieran Tierney limped off during Saturday's 3-0 loss to Liverpool and Bukayo Saka, Emile Smith Rowe and Granit Xhaka were absent due to injuries. David Luiz has undergone surgery.

Arsenal are striving to salvage a difficult campaign by going all the way to Gdansk in the Europa League and they can boost their chances with a quarter-final first-leg victory over Slavia Prague.

The Gunners will have been happy with the last-eight draw even though Slavia caught the eye by knocking out Leicester and Rangers on the way to the quarters.

And Arsenal's task has become more straightforward due to an injury and illness crisis which has ruled out first choice Slavia goalkeeper Ondrej Kolar as well as centre-backs Simon Deli, Ondrej Kudela and David Hovorka.

Slavia are down to one recognised central defender – David Zima – and head coach Jindrich Trpisovsky has a tough decision to make over his choice of goalkeeper after 18-year-old Matyas Vagner was red-carded 18 minutes into Sunday's 0-0 draw away to Zbrojovka Brno.

Vagner's weekend dismissal was not too costly but cooler heads are needed against the Gunners and Trpisovsky may consider 35-year-old Premysl Kovar, who has been used sparingly since arriving from Bulgarian side Cherno More in 2017.

Either way the Czechs look vulnerable at the back and might decide to take a few risks in search of an away goal.

Arsenal manager Mikel Arteta has a few selection issues to wrestle with due to the absence of defenders Kieran Tierney and David Luiz, but his team's dismal 3-0 loss at home to Liverpool was as much to do with a poor attitude as a lack of quality.

Arteta's side have offered up some decent displays when fully motivated and, given the importance of the occasion, it is reasonable to anticipate a positive performance and result.

Arsenal have not kept a clean sheet in their last 13 matches.