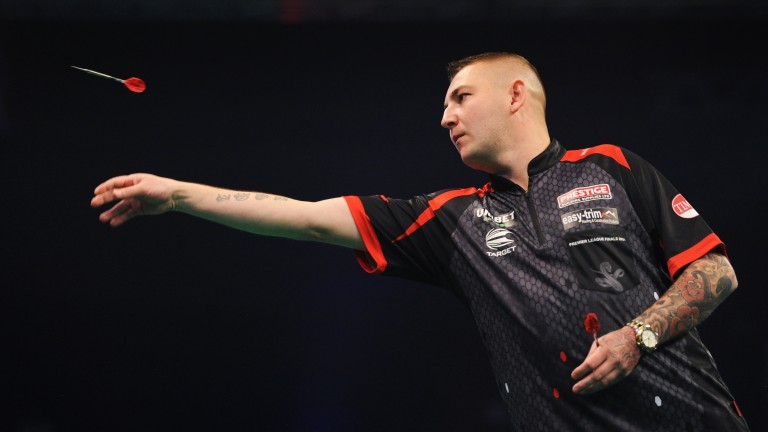 Local heroes Michael Smith and Nathan Aspinall will have the crowd on their side as they attempt to topple a pair of world champs in the last eight of the World Matchplay in Blackpool on Friday night.

St Helens' ace Smith is a 6-4 chance to see off Peter Wright in the first quarter-final before The Asp, from Stockport, hopes to defy the odds when he takes on Mighty Michael van Gerwen.

Peter Wright produced the performance of the first two rounds with his stunning 11-5 demolition of Joe Cullen on Wednesday, and he's a hard man to oppose right now.

He may not be finishing matches with the same equipment he started with, but it hardly seems to matter. He averaged 105.4 against Cullen and has dropped just seven legs so far.

He and Bully Boy have met three times over the last 12 months and Snakebite has won the lot – a fourth in a row is on the cards.

Seventh seed Smith insists he's scrapping like never before and it's nice to see some fight in this most frustrating of arrowsmiths. But he needed a handful of key misses from Jose de Sousa to get over the line against the Special One and won't find Wright so charitable.

The match prices look spot on but the 5-4 about Wright hitting most 180s might be on the big side.

Snakebite has nailed ten maximums in 28 legs thus far while Smith had notched seven in 41. And on the floor this year, Wright is averaging a maximum every 3.1 legs, Smith one every 3.3.

Michael van Gerwen has been made to work hard by Damon Heta and Ian White to make the quarters, and it's highly likely Nathan Aspinall will push the Dutchman even harder.

These two have met nine times with Mighty Mike triumphant on five of occasions. None of those five wins have been by more than a three-leg margin, though, and even his 6-3 semi-final win at Ally Pally 18 months ago was 21-18 in legs.

They have met twice this year in the Premier League – Aspinall won one, the other was a draw – so at the very least The Asp can cover a 2.5-leg handicap.

FIRST PUBLISHED 1:20PM, JUL 22 2021
Seventh seed Smith insists he's scrapping like never before and it's nice to see some fight in this most frustrating of arrowsmiths