Chris Waddle: Mikel Arteta can improve Arsenal but a squad overhaul is needed 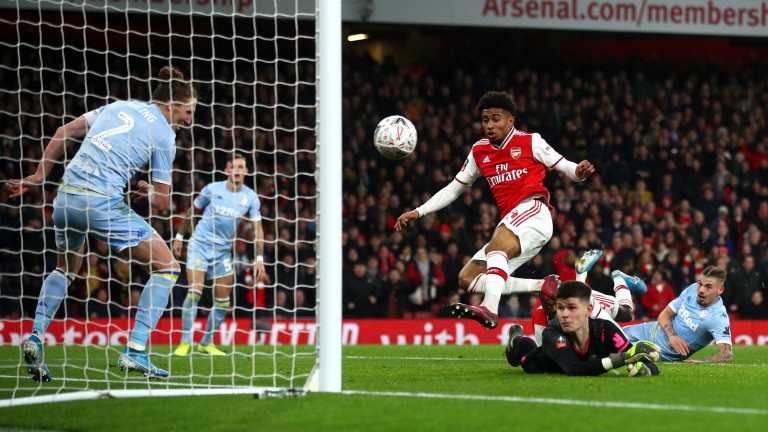 Arsenal are the Premier League team and Leeds are in the Sky Bet Championship, but I bet you Mikel Arteta took one look at Marcelo Bielsa’s side on Monday and thought that’s how I want my team to be playing.

Arteta’s men got the 1-0 win against Leeds in the FA Cup but the new Arsenal boss had to be impressed by the way their opponents from the Sky Bet Championship played.

The fact that he had to give his side a half-time rocket tells you all you need to know.

Arteta has got the makings of a top manager because he has learned from the best. He played under Arsene Wenger and coached under Pep Guardiola, so he couldn’t have been under the wing of better men.

Now he has the chance to put all that knowledge to good use and I’m sure we’ll see significant improvement from Arsenal – and a change in style. But it will take time.

This season it will be a massive success if they can get into the top six and I’m not sure I fancy them for that. But next season Arteta can have a charge at the top four.

To do so, however, will mean a summer clearout because I’m not sure all the players currently at the club will buy into the style of play Arteta wants – players who can press, look after the ball, have a hunger to work, and have that winning mentality.

Players such as Alexandre Lacazette and Pierre-Emerick Aubameyang need to show Arteta that they can be trusted in a new system but I’m sure they will be given the opportunity to fit in.

However, I’d be very surprised if Mesut Ozil is at the club next season. He’s a talented player who is ideally suited to Serie A and I can see him going there and shining. Right now, though, he looks like a player who has simply lost the appetite for the English game.

Jose Mourinho has a big decision to make with Harry Kane set to be ruled out for a while and any number of names are being thrown about as a possible short-term replacement for the England captain.

However, I reckon the solution might be closer to home for the Spurs boss.

It seems that big clubs need to be linked with big names but if I was Mourinho I’d have a look first at Troy Parrott before charging into the transfer market.

He’s only 17 and has just a handful of first-team appearances under his belt but I’ve seen him play and I like what I see.

In fact, the first thing you notice about Parrott is how similar to Kane he is. He’s not blessed with an unbelievable turn of pace but he definitely knows where the goal is.

If I was Mourinho I’d give him a go. The young lad will have the crowd on his side and if he gets a goal or two his confidence could go through the roof. That’s how it all started for Kane.

And if it has not worked out in a couple of weeks, and Kane looks like he might be out for a while, then maybe sign someone until the end of the season.

That, of course, is presuming Daniel Levy is prepared to finance such a move. He might well have decided that Mourinho will get money to spend in the summer and that he’s not going to do any panic business now.

Olivier Giroud seems to be one of the big-name stars being linked with Spurs and I’m sure there are a number of clubs looking at the French World Cup winner.

I like Giroud. I know he misses a few but he scores them as well which tells me he knows where to find space in the box to accumulate chances. Indeed, he’s getting better with age.

But Giroud is 33 now and would probably want a two or three-year contract next rather than a loan deal and I can’t see Spurs offering that.

Anyway, would Chelsea really want to offload one of their strikers to the club most likely to be challenging them for the top four? I doubt it very much.

Where Spurs really need reinforcements is at the back. It’s one clean sheet in 12 under Mourinho and that’s not going to improve much with this defence.

Toby Alderweireld is good, as good as there is, but there are huge question marks over Jan Vertonghen, Davinson Sanchez and Juan Foyth.

Mourinho will have scouts everywhere but again, will Levy be prepared to take a gamble now and risk spending a lot of money on someone who doesn’t improve their prospects or have the two of them already agreed that the rebuild comes in the summer?

There are plenty of people who believe Liverpool won’t go through the Premier League season unbeaten on the grounds that there is always a blip somewhere – but I reckon they’ve had their blips.

I’ve seen two or three games – against Chelsea, Sheffield United, Aston Villa – where they have had to ride their luck and still they came through unscathed.

They just keep on winning and watching Jurgen Klopp’s mixed-up side beating Everton in the FA Cup just added to my belief that they can go through the league season without a loss.

Klopp would have looked at his first-team squad and banked on 18 or 19 players, none of whom have let him down and all of whom have been called upon. But a few injuries, a suspension or two, and those numbers get stretched especially with the Champions League on the horizon.

But against Everton – a really strong, experienced and confident Everton – Klopp threw in a few kids and saw them shine. I thought they were absolutely outstanding.

Now Klopp must think he has a first-team squad of 23 or 24 because he can trust them all. So they aren’t going to necessarily get any weaker.

They’ve got a really tricky test at Tottenham this weekend but they just seem to be passing all the tests.

Jose Mourinho will treat this as an away game, trust me. He won’t quite park the bus but he won’t go toe-to-toe with Liverpool because there will only be one outcome.

If he can get a point it would represent a job well done but stifling Liverpool is no easy thing.

The barren run goes on for Joelinton at Newcastle and I can’t see him finding a way out of the rut.

I was at Rochdale to see them play the Magpies in the FA Cup last Saturday and Joelinton had several chances to add to the one goal he has scored this season.

He probably could have had a hat-trick which would have given him a massive lift, but he fluffed all three because his confidence is down. Indeed, he never really looked like taking any of them.

I have a pang of sympathy for him because I don’t think he’s a centre-forward and I really don’t think he should have taken the number-nine shirt when he arrived.

The problem is that he’s pretty much all Newcastle have got up front. You couldn’t build an attack around Andy Carroll because he’s rarely fully fit, so Steve Bruce has had to show unbelievable patience with the Brazilian.

I’m not sure Steve would have bought him – I think the business had been done before Bruce arrived at the club – and I don’t know if he rates him.

My concern is where to play Joelinton. He played on the right of a three in Germany and I think that’s probably where you’d get the best out of him.

As I say, he doesn’t look a centre-forward to me. His first touch isn’t the best, he finds it hard to control a ball and doesn’t look like a goalscorer. He doesn’t seem to enjoy playing with his back to goal.

Newcastle paid £40 million for him in the summer. Bear in mind that Rafa Benitez had turned him down at £20m because he thought he was too expensive. You’d struggle to get £10m for him now.

Manchester United would dearly love to persuade either James Maddison or Jack Grealish to move to Old Trafford this month but I don’t see either happening.

In fact I don’t see an awful lot of transfers happening in January at all.

Of all the top teams, Chelsea should certainly think about getting another striker in and Leipzig’s Timo Werner looks a good fit.

Mason Mount and Tammy Abraham have been revelations this season but this is their first full season of Premier League football and they are going to come off the pace eventually.

Tottenham should also be trying to engineer Christian Eriksen’s exit because if they don’t he will almost certainly be off in the summer on a free.

It’s clear that Jose Mourinho isn’t overly bothered about the Dane, who could set Serie A or La Liga alight. If Inter Milan offered £15m or so, Spurs should bite their hands off.