Andrey Rublev could trouble Alexander Zverev for the first time 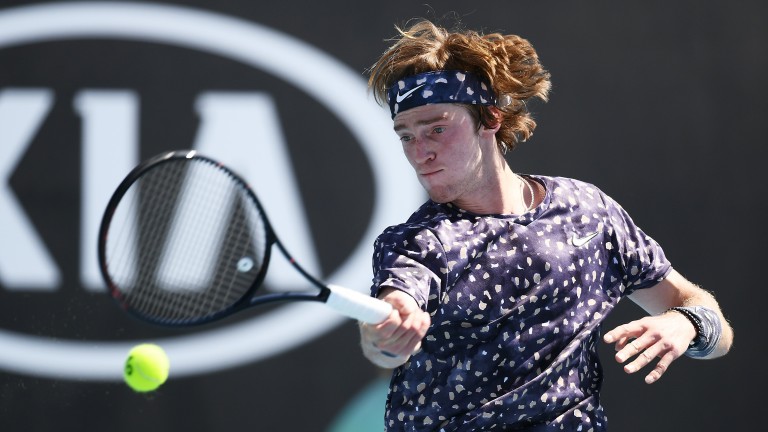 Rafael Nadal will have enjoyed seeing Nick Kyrgios, his Australian Open fourth-round opponent, being taken to a deciding-set tiebreak by Karen Khachanov in the last 32.

After winning the first two sets against the 16th seed, Kyrgios's struggle to close out the match has to go down as a negative.

But while world number one and top seed Nadal could well take greater hope after the Kyrgios marathon, the Australian Open, which he has won only once, has been the Spaniard's weakest major.

Kyrgios has the weapons to rule the tennis world, but the fact he is seeded only 23rd in this event tells a story and his clash with Nadal could be tight.

There could be better value in other matches than the Nadal v Kyrgios battle and now that he has gathered himself after a hugely successful start to the year, Andrey Rublev could notch his first triumph over Alexander Zverev.

Russian-born German Zverev has won all six sets the duo have contested. But while Zverev is still on a huge learning curve, Rublev is also a special talent and once the Muscovite gets to work, as he did in his third-round victory over David Goffin, the seventh seed could find himself on the back foot.

Rublev went to Melbourne after taking titles in Doha and Adelaide but while possible fatigue should be taken into account, the 17th seed missed a couple of months in 2019 due to a back problem so his energy reserves could still be high.

Kiki Bertens leads Garbine Muguruza 3-2 in their personal series, but the Dutch­woman's victories came on clay and the Spaniard has won their last two meetings on hard courts.

Bertens took time to dismiss Zarina Diyas in her latest singles outing, while Muguruza took apart fifth seed Elina Svitolina in a 6-1 6-2 mauling and she looks the better bet.

It's 7-7 in the series between Angelique Kerber and Anastasia Pavlyuchenkova but while the 17th seed has enjoyed greater success in winning three majors, the Russian has often had her opponent's measure on hard courts.

Pavlyuchenkova's 7-6 7-6 win over second seed Karolina Pliskova will have given her a boost and the market may be right to respect the 30th seed's chance.