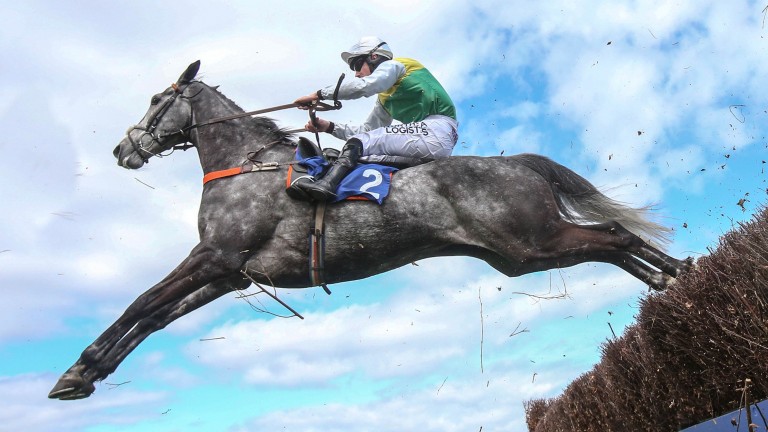 This Grade 2 now carries the name of Monet's Garden, who became so strongly associated with the race in the late noughties, winning it three times including a famous defeat of Kauto Star in 2007.

It would be only a little cruel to suggest a similar honour may be bestowed on Cloudy Dream and the second-place marker in the winner's enclosure. On three of his four visits to Aintree, the supremely talented Sir Trevor Hemmings-owned grey has finished second.

That is symptomatic of his career. Of 20 starts, he has won seven but been runner-up nine times. The difference now, for a horse perhaps best known for chasing home Altior in the 2017 Arkle, is that he has moved trainers.

Formerly with the late Malcolm Jefferson and latterly his daughter Ruth, Cloudy Dream will make his debut for Donald McCain on Sunday.

McCain, who discussed Cloudy Dream with the Racing Post during the week, added on Saturday: "Everything's gone well since, he's had a canter this morning and it's all systems go."

Regarding his fitness for this first start at his owner's beloved Aintree, he said: "He's ready for his first run, not eyeballs-out ready but he's there to run a race and we'll see where we go from there. I haven't even discussed riding plans with Brian, but he's obviously ridden the horse loads in the past."

In October, summer fitness can count over what is often deeper spring form. The Old Roan, worth £80,000, is often in these terms the first winter race when those returning from a summer off tend to hold sway. That is not to say the race is a bellwether for the season, but four of the last five winners were returning to action.

Among those reappearing in the nine-strong field is Flying Angel, who won the Grade 1 Manifesto Novices' Chase here in 2017 on good ground but spent last season running mostly in the mud. 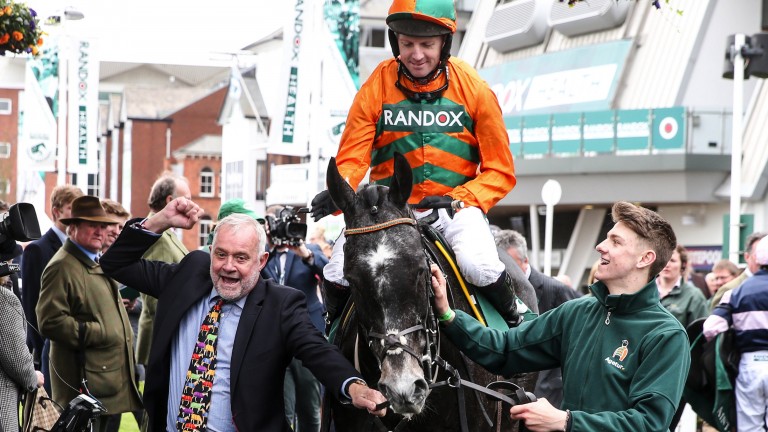 Flying Angel: has tasted victory before at Aintree in the Manifesto Novices' Chase in 2017
John Grossick (racingpost.com/photos)

Trainer Nigel Twiston-Davies, who is having another profitable autumn, said: "We're hoping the less testing ground will help and it was good when he won the Grade 1 novice here."

Flying Angel did not have an awful lot to shout about last season, but has dropped 12lb as a consequence to a mark of 145.

Twiston-Davies also runs Templehills, who won on his return from a break at Warwick recently but is an occasionally sketchy jumper who has not run over fences here before. He is the only confirmed pace-forcer in the field.

"I haven't looked at the race too closely, but I don't mind if others want to make it," said Twiston-Davies. "He is what he is and we'll hopefully make it if nothing else wants to."

The summer form is represented by Voix D'Eau, who got back to his very best for Harry Fry but has since been sold and will start out for Lucinda Russell.

Russell said: "We've had him since the sales [mid-September] and he's been bought to run at the big meetings. Everything's gone well and he seems to have a lot of ability."

Asked whether she might campaign him as Fry had, she said: "If this goes well we might go for the Grand Sefton, but after that I imagine we'll give him a break until the spring."

FIRST PUBLISHED 6:00PM, OCT 27 2018
Everything's gone well since, he's had a canter this morning and it's all systems go

Sister act! Abbie and Ella make it a day to remember for McCain family with wins 'He's the best jumper in the yard' - Lacey relieved as Neville's Cross gets up