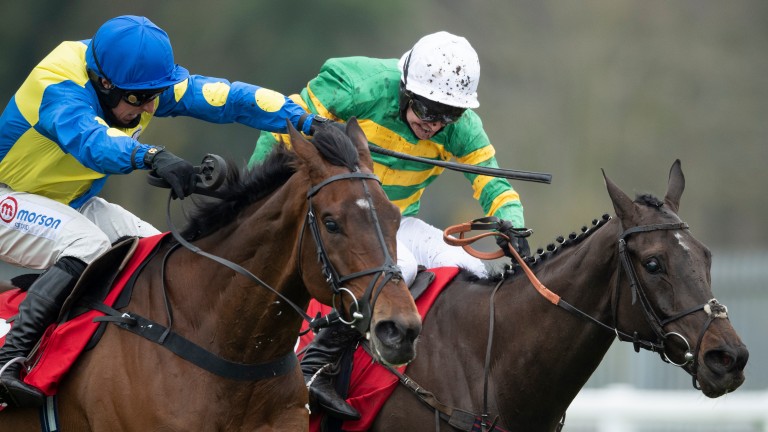 What a difference a big win can make. It has been tough going at times this season for the usually prolific Philip Hobbs team, but Sporting John pointed to better times ahead as he put the yard back in the Grade 1 spotlight with victory in the Virgin Bet Scilly Isles Novices' Chase.

Hobbs has consistently operated with a strike-rate nudging 20 per cent over the past seven seasons, but that had dipped to 13 per cent with 38 winners for the current campaign at the start of the day.

After a tardy start, Sporting John's chance did not look obvious in the early stages as he gave his rivals a head start, but he started to warm to the challenge over the Railway fences for the final time and, in attritional conditions, stayed on determinedly to overhaul Grade 1 winner Shan Blue from the last.

"I'm chuffed to bits with the horse," said Hobbs. "The last few runs have been very disappointing, but it's great to see him back on form even if he did take a long time to warm up."

A high-class novice hurdler, Sporting John finished distressed in the Ballymore Novices' Hurdle at Cheltenham in March and proved a disappointing favourite on his chase debut at Exeter. 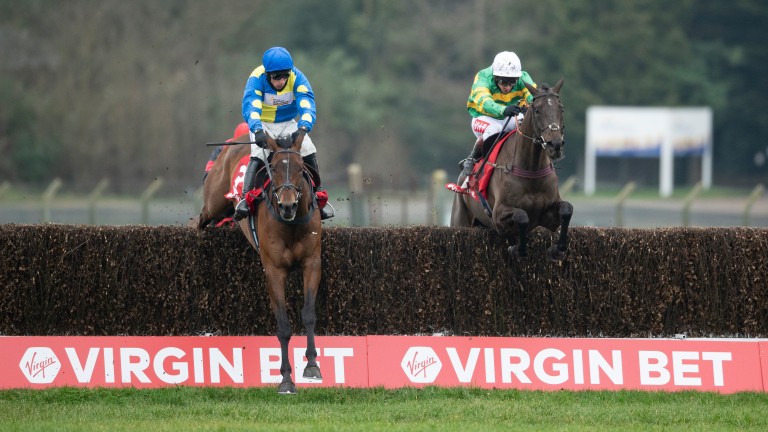 Yet Hobbs had the conviction to run him in a Grade 1 on only his second start over fences and was duly rewarded.

"It's only his second chase and those first three fences at Sandown are the Railway fences and it's quite an ask for a horse when he's a little bit detached," said the trainer. "As the race went on he warmed up and came into it. A Grade 1 is brilliant for the yard."

Despite a slower than average season, Hobbs said there had been nothing obvious troubling the horses and that he had plenty of ammunition for the spring.

He said: "We've had a bit of a slow time, mind you just recently we've not had that many runners and I've got a number of horses having a bit of an easier time before a spring campaign."

The winner was cut to 8-1 (from 33) for the Marsh Novices' Chase and 14-1 (from 33) for the Festival Novices' Chase with Paddy Power. Of his potential Cheltenham target, Hobbs said: "I'll talk to Richard Johnson, JP McManus and the team. Obviously today was a testing two and a half and at this stage it would be difficult to know what we should be doing, but we've got plenty of time and it's a nice problem to have."

The Marsh looks the obvious target for runner-up Shan Blue, winner of the Kauto Star over Christmas, who lost little in defeat.

Trainer Dan Skelton said: "He jumped great and showed such exuberance that it's disappointing to be beaten, but there are no excuses and I'm super proud of him. He has now finished first and second in two Grade 1 novice chases and barely made a mistake."

Richard Johnson has considerable ground to make up if he is to launch a title challenge but the four-time champion jockey left Sandown with a treble, having added to the wins of Sporting John and Native River aboard Deise Aba.

The Trevor Hemmings-owned eight-year-old also provided Hobbs with a double when bouncing back from two pulled up efforts to take the Virgin Bet Masters Handicap Chase for the second year running.

"He is a bit one-paced but a strong stayer," said Johnson, who carried on smiling when asked about his place in the table, pointing out: "I'm still having a lovely time – and it's better than working for a living!"

Chetenham's loss looks like being Sandown's gain as Dan Skelton nominated the 2m4f novice handicap chase that has this year been dropped from the festival schedule and moved to the Imperial Cup meeting for Alnadam, who finished as strong as any horse on the card to land the 2m4f handicap chase.

Skelton said: "Everything about slow ground and a big galloping track like this suits him. Three miles in time won't be an issue and he's still very progressive. I've never felt like we've got to the bottom of him at home, never mind at the track."

Two weeks after winning the Clarence House Chase on First Flow, David Bass exacted revenge of sorts for his star ally when steering Moonlighter to claim a 1m7½f handicap chase in which the rider somehow stayed in the saddle when his mount landed awkwardly at the first fence. 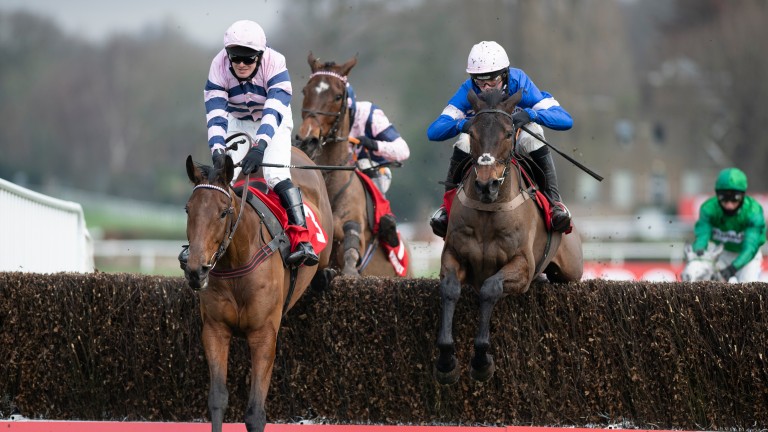 Twelve months ago Dolos beat First Flow into second but this time it was the race's dual winner who had to settle for second after coming home a length behind the positively ridden Moonlighter, now bound for the Grand Annual at Cheltenham.

The card's other 1m7½f handicap chase ended with High Up In The Air extending his winning sequence to four for Gary and Josh Moore.

FIRST PUBLISHED 2:04PM, FEB 6 2021
As the race went on he warmed up and came into the race. A Grade 1 is brilliant for the yard

Who can lay down an early season marker by mopping up a strong Persian War? Former champion Skelton stars on Notnowlinda for thrilled owner