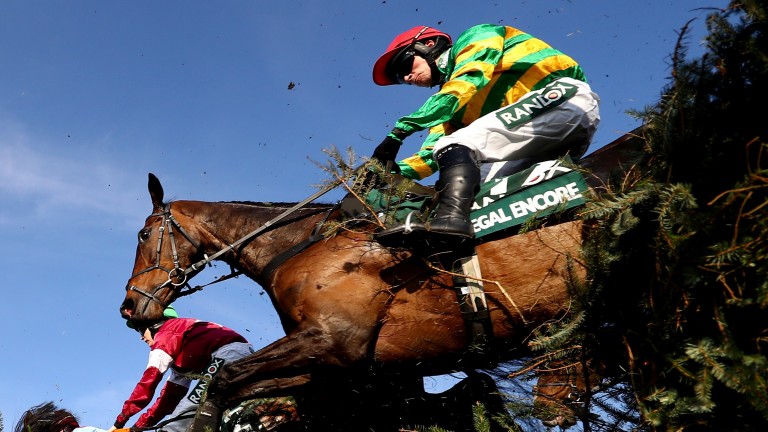 Regal Encore: back at his beloved Ascot prior to another tilt at Grand National
Michael Steele
1 of 1
By Richard Birch 6:00PM, FEB 14 2020

You only have to look at the star name on the card to understand that Ascot can be a bit of a specialist track and, while he may not be in Cyrname’s league, Regal Encore absolutely loves the place. Three wins, a second and a third from eight runs at the Berkshire venue is evidence of that and Anthony Honeyball’s runner bounced back to form when winning the Silver Cup for a second time, three years apart, over course and distance at Christmas.

The handicapper has had his say and put Regal Encore up 4lb, but he has won off 4lb higher at the track. That was two years ago though, so can he still reach that level at the age of 12?

A similar question applies to another Ascot favourite, Valtor. He comes into this race unbeaten in two outings at the track and is only 2lb higher than when winning here in December 2018. If he can reach his best more than 13 months on at the age of 11 he will be a big player, but there are several young whippersnappers in competition who come into the contest on the upgrade, and the older brigade might be vulnerable to those progressive types.

Domaine De L’Isle is the poster boy for the up-and-comers in the race and bids to start an Ascot legacy of his own having completed a hat-trick with victory on his first start at the track last month. That means he has now improved his Racing Post Rating with each of his five starts since joining Sean Curran from France and there should still be more to come.

However, it’s never easy to win four handicaps on the spin and if Red Indian can repeat the form of his fourth in the Grade 1 Kauto Star Novices' Chase at Kempton last season he should be too good for these. Only La Bague Au Roi, Topofthegame and Santini finished ahead of him that day and Red Indian shaped as though he is on the way back to form when fifth at Haydock last time.

He travelled as well as the winner and traded at a low of 2.02 in running before a lack of race fitness appeared to take its toll from three out on his first run for 287 days. There should be improvement to come with that under his belt and he has been dropped 2lb in the weights too.
Graeme Rodway

Regal Encore has won three of his eight starts at Ascot (strike-rate of 38 per cent).

Nicky Henderson, trainer of Valtor
He won’t mind the ground and likes Ascot.

Sean Curran, trainer of Domaine De L’Isle
The horse is in good form, and the step up in trip will suit – it should be perfect for him. Everything seems in his favour, and he’s done well since his win at Ascot last month. I’m very hopeful.

Anthony Honeyball, trainer of Regal Encore and Jepeck
Regal Encore surprised us when he won last time, and looks set to run another good race off a 6lb lower mark than when third in the race last year – he’s also been in better form this season. I’m hopeful of a very strong showing. He won it two years ago, and has achieved very good results at Ascot. The plan is to run him in the Grand National next. Jepeck’s first preference is Ascot, but if they call it off early he’ll go up to Haydock. He’s also entered at Exeter on Sunday. If we can run him somewhere on Saturday that’s what we want to do.

Kelly Morgan, trainer of Red Indian
He likes heavy ground, and I think the track will suit him. He seems in good form, and will have come on for his run at Haydock last month. Hopefully he’ll have a good chance.
Reporting by Richard Birch

FIRST PUBLISHED 6:00PM, FEB 14 2020
He won it two years ago, and has achieved very good results at Ascot. The plan is to run him in the Grand National nex

Charlie Appleby outlines plans for top three-year-olds Adayar and Hurricane Lane The King George was great but this Saturday at Ascot is far more important King George analysis: 'Adayar might not be the best colt in his stable' Forgive the gushing enthusiasm but I feel like I have seen something special Who is better - Hurricane Lane or Adayar? Our experts have their say Zain Claudette holds on to provide Ray Dawson with emotional first Group win