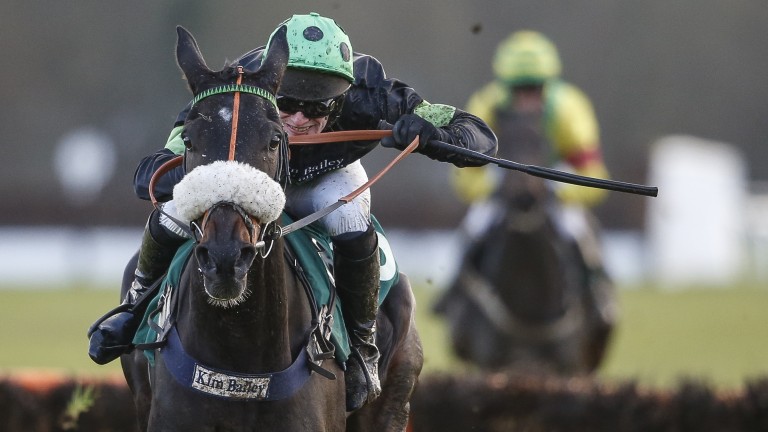 Many horses flounder when the ground is nearly unraceable, but First Flow thrives in deep conditions and the mudlover was in his element as he recorded a fifth successive victory with a remarkable weight-carrying performance in the feature Castleford Handicap Chase.

The eight-year-old had to give at least 17lb to his rivals and, while success looked in doubt turning into the home straight, he battled to an attritional half-length win under David Bass to take his chasing tally to six wins in ten starts.

"What an extraordinary horse he is – I'm absolutely delighted," said winning trainer Kim Bailey. "We were playing catch-up throughout and he gave lumps of weight away on probably the worst ground he'll ever race on in his entire life. That's my 40th winner of the season too, so I'm chuffed.

"His owner Tony Solomons has been with me every season bar my first one, he's my longest-serving owner, I'm so pleased to have another special horse for him."

Moving yards is tough enough in times of normality let alone during a pandemic, but Sean Conway's decision to relocate to North Yorkshire in the summer was belatedly vindicated when Oliver's Island gave him his first winner of the season.

The trainer has stabled his 18 horses at George and Ann Duffield's Sun Hill Farm yard in Leyburn, and received a welcome late Christmas present with the eight-year-old's victory in the 3m conditional jockeys' handicap hurdle.

Conway said: "It was well needed for everyone in the yard, especially in these tough times. It took us a couple of months to get used to everything, but we're definitely seeing big improvements since moving. We're very excited for 2021."

Fresh from Bryony Frost's victory on Frodon in the King George VI Chase, Paul Nicholls provided another talented female jockey with a winner in the shape of his daughter Megan, who eased to victory on Mr Glass in the bumper.

It was the second leg of a double for the trainer following Hacker Des Place's success in the 2m juvenile hurdle.

FIRST PUBLISHED 6:30PM, DEC 27 2020
We were playing catch up throughout and he gave lumps of weight away on probably the worst ground he'll ever race on in his entire life