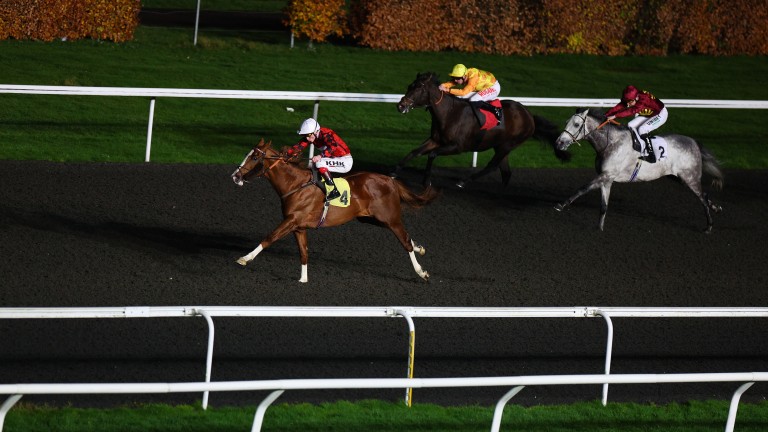 The Wizard Of Eye ran out the winner of the Hyde Stakes
Andrew Redington/Getty Images
1 of 1
By Harry Wilson UPDATED 6:36PM, NOV 28 2022

Following on from an 80-1 winner last year, The Wizard Of Eye caused another upset in the Listed Hyde Stakes when the outsider of four proved too good for his rivals.

The Stan Moore-trained three-year-old has been highly tried all year, including when finishing ninth behind Coroebus in the 2,000 Guineas, but had not won since a Newbury novice on his second start in July 2021.

Sent off at 20-1 for the feature, The Wizard Of Eye settled at the front under David Egan before kicking for home and putting three and a half lengths between himself and the field.

"He'd been asked big questions and hadn't run badly, but with his rating you don't get easy races," Moore said.

"We put cheekpieces on today because he's still a bit of a baby and he showed what he's capable of. We could aim high next year the way he did that. They were good horses and he showed us a bit of class there."

As the light faded and the rain began to fall Dragon Icon shone bright on his debut in the 7f novice, providing the middle leg in a 180-1 treble for Egan.

Bought for 360,000gns as a yearling by Yoshiro Kubota, who also owns the top-class Dragon Symbol, Dragon Icon swept to the front inside the final furlong before being eased down to win by three and a quarter lengths for trainer Roger Varian.

Egan had earlier steered odds-on Azure Angel to victory in the 6f fillies' novice, the first leg of a double for Varian.

'I was pleased with what I could see!' - Duke Of Luckley leaves it late in fog

FIRST PUBLISHED 6:08PM, NOV 28 2022
He'd been asked big questions and hadn't run badly, but with his rating you don't get easy races