Race Reports OUT ON HIS OWN

Stradivarius the king of Europe as he becomes winningmost Pattern performer 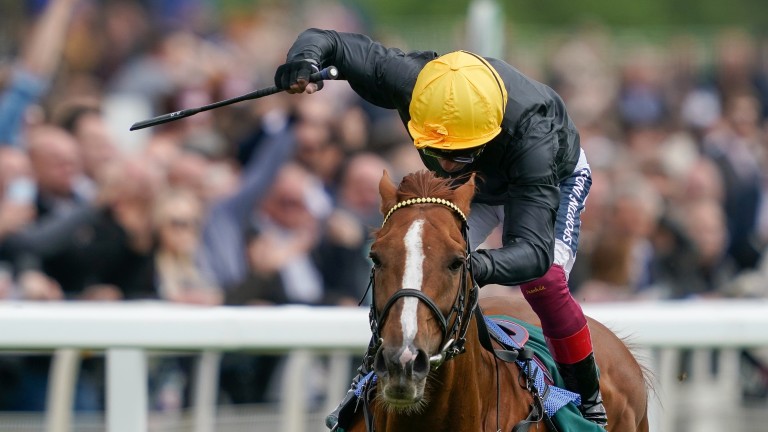 Stradivarius gallops to a record-breaking 18th Group victory in the Yorkshire Cup
Alan Crowhurst (Getty Images)
1 of 1
By Peter Scargill UPDATED 7:35PM, MAY 13 2022

Stradivarius raised the bar at York on Friday as he stepped out alone as the winningmost horse of Group races trained in Europe, becoming the first in 51 years to win 18 contests at the esteemed level.

The eight-year-old's third victory in the Yorkshire Cup moved him clear of Cirrus Des Aigles as the most prolific winner of Group races trained in Europe since the European Pattern was created in 1971.

Among the races captured by Cirrus Des Aigles were the 2011 Champion Stakes, the 2012 Dubai Sheema Classic, the 2014 Coronation Cup and the 2015 Prix Ganay, his third win in the Group 1 and the 17th time he had scored at Pattern level.

Unlike Cirrus Des Aigles, Stradivarius remains an entire horse, which presents different challenges, according to John Gosden, who co-trains the star stayer with his son Thady. Goldikova, the third winningmost horse of Group races trained in Europe with 15 victories, was a mare. 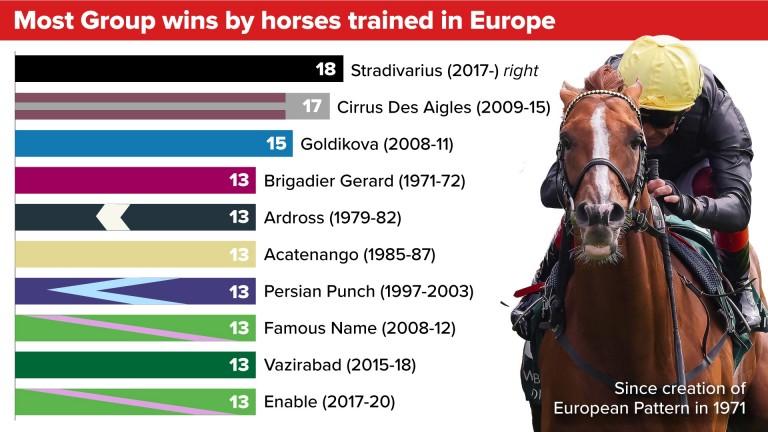 "He's totally unique and he's a crowd-pleaser," Gosden said. "I was nervous, but as I said in the paper he's an eight-year-old entire and it's a lot different to training an eight-year-old gelding, I can tell you."

Summing up what Stradivarius has meant to him, owner-breeder Bjorn Nielsen said: "He's spoilt me. You get a horse like him and you'll never get another one like that – I should stop now really because he's spoilt me.

"The Gold Cup [at Royal Ascot] is the focus and nothing more than that. It's one race at a time."

As well as the Gold Cup at Royal Ascot next month, connections of Stradivarius have earmarked the Group 1 Goodwood Cup at Glorious Goodwood in July as a target.

Should he triumph in both races he would stretch his record of Group wins to 20. He has won £3,297,672 (€3,876,358) in prize-money plus both editions of the Weatherbys Hamilton Stayers' Million, collecting £1 million for connections each time before the series was ended.

In addition, victory in the Gold Cup would be another milestone moment as it would move Stradivarius alongside Yeats as the only four-time winners of the signature race of the royal meeting. As it stands, Stradivarius is ranked alongside Sagaro as a three-time winner of the 2m4f Group 1.

'He's a monster and I have a huge opinion of him' - Oisin Murphy selects his ten Is Appleby fending off the red-hot Haggas? How the trainers' title race stands 'Enable talk silly, but Emily Upjohn in Taghrooda class' - Gosden on Oaks fancy ITV Racing tips: one key runner from each of the nine races on ITV4 on Sunday 'He's been working like a train but is a thug' - Muir buoyed as Galiac grows up The Queen's Reach For The Moon denied comeback win by tough My Prospero