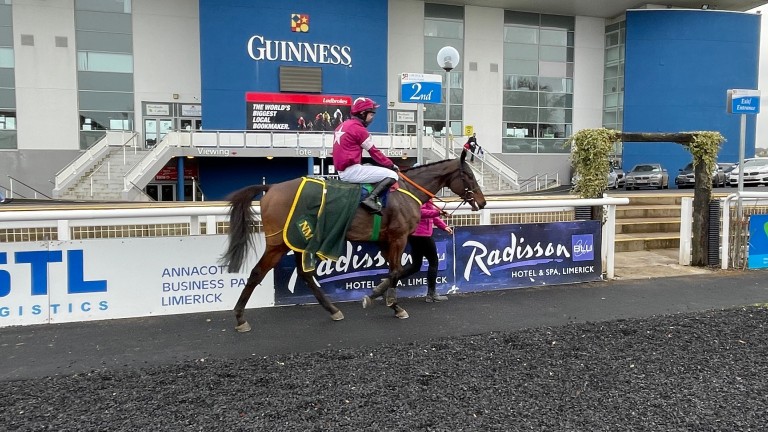 This Limerick meeting may well be a Grade 1 fixture, but with most of the top jockeys in action at Leopardstown it is a meeting that gives a chance to riders who might not always get them, and 7lb claimer Michael Stenson was seen to good effect in winning the 2m4f conditions hurdle on the Gigginstown-owned Diol Ker, his first winner for his new boss Noel Meade.

In a race run at a farcical pace, even given the testing conditions, the winner was struggling to pick up and indeed to jump when the pace began to quicken, but Stenson's persistence paid off and his mount stayed on strongly from the last to get up on the line for a neck victory over front-runner Born By The Sea.

Stenson is now full time with winning trainer Noel Meade having spent the first few years of his career with Ted Walsh, and said: "It's great to finally get that. I've been full time with Noel for about a year and a half now.

"We went no gallop and as soon as we started quickening a bit he started missing hurdles. I thought we were beaten at the top of the hill, but he stuck at it well and won with a bit up his sleeve."

Winner for Walsh on mixed day

Mark Walsh might have fancied his chances of having a treble on the afternoon or possibly better, but there was an element of it being one of those days for the Clane native, although he will certainly look forward to renewing the partnership with the Willie Mullins-trained Shadow Rider after he was an impressive scorer in the 2m4f maiden hurdle.

The French-bred had been third to subsequent Grade 2 scorer Ashdale Bob on his hurdles debut at Navan the previous month, and he did his bit to frank the form with an easy eight-length success.

"He's a good horse and Jessie's [Harrington] franked the form by winning the Grade 2 at Navan [with Ashdale Bob]," said Walsh. "He won easy and we would have been disappointed if he hadn't."

It concluded an eventful first hour of the day for the rider. His mount Tower Bridge had been pulled up with what seemed a fatal hock injury before the straight in the conditions hurdle. Thankfully, the injury was not as bad as it seemed in real time and, after considerable veterinary work on the track in the half-hour which followed, he was saved and able to walk into the horse ambulance.

Walsh's mount Palm Beach had earlier been outdone by 100-1 shot Awkwafina in the opening juvenile maiden hurdle. The Sam Curling-trained daughter of Kyllachy is owned by popular jockey's valet Liam Cleary, who revealed he was able to get a few euros on each-way at 150-1. Merry Christmas!

FIRST PUBLISHED 6:00PM, DEC 26 2020
I thought we were beaten at the top of the hill but he stuck at it well and he won with a bit up his sleeve

Ruby Walsh: 'Annie Power hurt - that could have been my Frankie Dettori day' 'I told the owner he wasn't improving' - Acapella Bourgeois proves Mullins wrong 'He's going to carry a lot of Irish hopes going to Cheltenham - including mine' You don't need to join the Ramblers Association for this glorious ten-mile hike 'He's extraordinary' - Henderson thrilled with Champ ahead of Gold Cup bid Willie Mullins: 'Two years ago I'd given up on the dream of winning a Gold Cup'