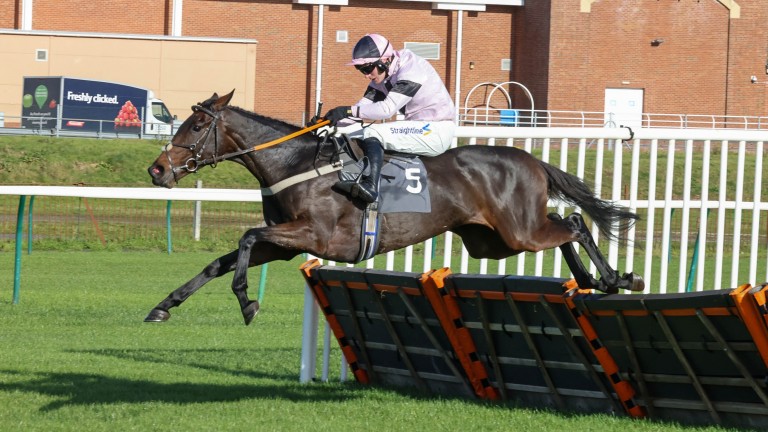 Trainer Rose Dobbin labelled it a "red-letter day" as a quickfire treble continued her sparkling early season form which has seen her saddle 11 winners from just 31 runners.

The day got off to the perfect start in the 2m4½f mares’ maiden hurdle with £140,000 purchase The Player Queen, winner of a Cheltenham bumper in April for Mel Rowley, justifying 8-13 favouritism to score by seven lengths under Craig Nichol.

Dobbin said: "We bought her in May, she's a lovely mare and very straightforward. The pressure is on when she's odds-on but she did it in great style."

"I prepared my dad [owner, Duncan Davidson] if he didn’t win, saying he's probably going to want it further and softer," said Dobbin. "He's a big stamp of a horse, looks like a chaser and is a nice one for the future."

The memorable day was completed when the Conor O'Farrell-ridden Permission Granted took the 3m½f handicap hurdle.

Dobbin, who is operating at a career-best strike-rate of 35 per cent for the season, was keen to praise the efforts of everyone back at her Hazelrigg stables, adding: "I want to give a mention to the team at home.

"They’re doing a good job and a big thank you to them. If we can keep going this way we’ll have our best season numerically.”

Donald at the double

FIRST PUBLISHED 6:37PM, OCT 25 2021
If we can keep going this way we’ll have our best season numerically

Lucinda Russell team continue in fine form with Rapid double 'He could be very good at this job' - Skycutter delights Phil Kirby on debut Ayr Placepot tips: Graeme Rodway with a small perm for the sole jumps fixture Brian Hughes reaches 100 wins for the season to set new record for the north McCain form continues as daughter Abbie seals hat-trick on Geromino 'That was a little bit special' - Minella Trump makes it seven in a row