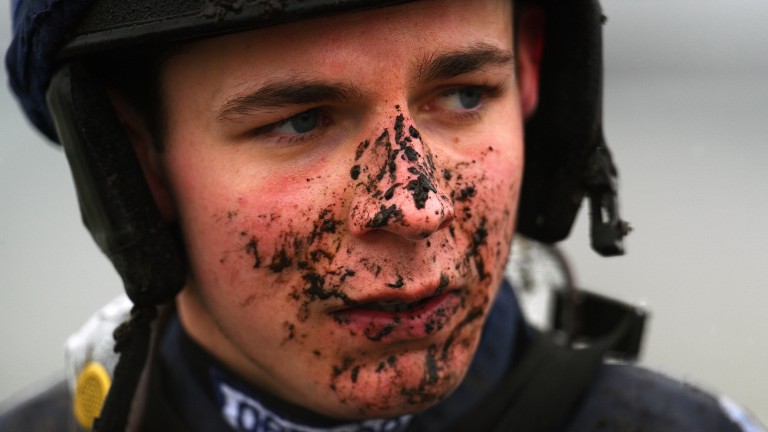 Rex Dingle's favourite Christmas present arrived a day late as he rode out his claim on Belle De Manech in the 1m7½f mares' novice hurdle, although he had to overcome a dramatic start to do so.

Dingle was unseated at the post and the four-year-old mare had to be inspected by the doctor before being allowed to race.

Once reunited, the pair were prominent throughout and repelled the challenge of the Colin Tizzard-trained favourite Rose Of Arcadia to score by a length and three-quarters.

"It's a nice Boxing Day present," said Dingle, who rode his first Cheltenham Festival winner on Indefatigable in March. "It was very nice to get it for Anthony as well because he has been so important to my progression.

"I wouldn't be here without all his help over the last two years. Along with Jeremy Scott he has been my main supporter and between them I've been very lucky."

Nearly is perfect for King

Neil King looks to have a smart chasing prospect on his hands after Nearly Perfect proved foot perfect in the Lord Stalbridge Memorial Cup Handicap Chase.

The six-year-old finished in front of Appreciate It and behind only Envoi Allen on his debut in a point-to-point in 2018, but failed to shine over hurdles.

He has come alive since going chasing and recorded a third win over fences by making every yard under 7lb claimer Jack Andrews.

"He got in a real nice rhythm out front, he's a proper chaser," said Andrews. "He probably needed another summer to fill out his frame and I'd say he's got a real bright future."

Did you know you can bet with youronline bookmaker without leaving the Racing Post app? Simply sign in to your existing bookmaker account via the accounts button and tap the odds buttons on a racecard to place bets

FIRST PUBLISHED 5:30PM, DEC 26 2020
It's a nice Boxing Day present. It was very nice to get it for Anthony as well because he has been so important to my progression

Harris hails youngster's help as Aintree My Dream finally comes good Saturday reaction: 'He's thrown a grenade into the Champion Hurdle market' 'He's back' - Goshen reignites Champion Hurdle dream after dazzling Kingwell win Betfair Ascot Chase favourite Cyrname now odds-against to win race again Can Song For Someone lay claim to being the best hurdler in Britain? Saint or sinner: which Cyrname will turn up at Ascot this time?