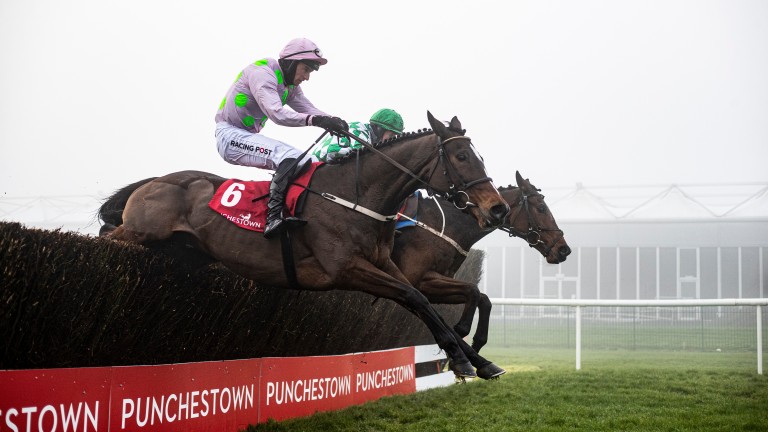 The blanket of fog and an intermittently stalling TV scout camera meant that the viewing public did not see much of it, but that cannot take away from a record-breaking third consecutive John Durkan Memorial Punchestown Chase win for Min as the nine-year-old led home a 1-2-3 for Irish champion trainer Willie Mullins.

Even in the absence of Samcro, the Grade 1 contest had a seriously competitive feel to it, but it was Min who took charge, making most of the running and jumping extremely well according to his rider Patrick Mullins.

He responded strongly on the run to the line to see off the challenge of stablemate Tornado Flyer under Bryan Cooper, who managed to head him briefly in the straight until Min rallied for a game success by a length, with Melon a further six and a half lengths back in third.

"He put in an exhibition of jumping, he was absolutely brilliant everywhere," said the winning rider. "He settled great in front. Chris's Dream was beside us most of the way, but from when we turned down the back he was making a half-length or a length at every jump.

"I was on the bridle down to the second-last when Tornado Flyer appeared on my outside. Bryan was motionless and I was flat out down to the last but we winged it and won by a length." 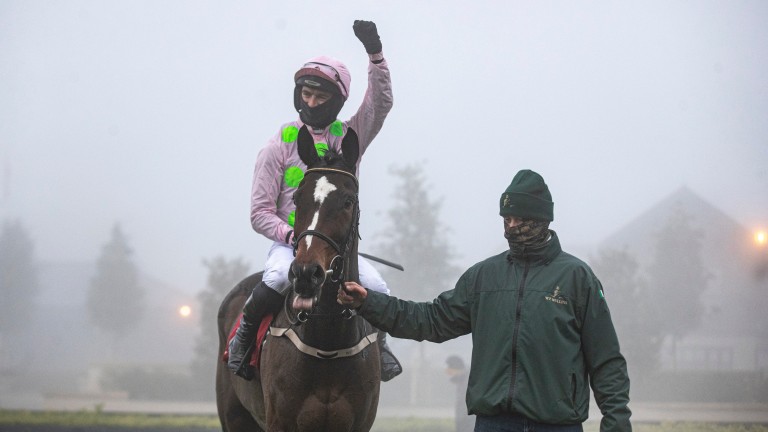 Min and Patrick Mullins are led in amongst the Punchestown fog which forced the rest of the card to be abandoned
Patrick McCann (racingpost.com/photos)

Mullins added: "I was headed going down to it, but that happened last year as well and he came back. He was just brilliant and his jumping over the last mile was fantastic. He's the first horse to get a hat-trick in this race and he will be very hard to replace."

Min was cut to 8-1 (from 10) by Paddy Power for the Ryanair Chase at Cheltenham, a race he narrowly won last season by a neck.

For Willie Mullins, it was a seventh win in the race, equalling the record previously solely held by Jim Dreaper, who had won the race with the likes of Carvill's Hill and Merry Gale twice.

Speaking from home, Mullins said: "To win three John Durkans in a row is a terrific achievement and the fact that it was never done before shows how difficult it is to do. He has also done it with three different jockeys [Ruby Walsh in 2018 and Paul Townend in 2019].

"I imagine all roads lead back to the Ryanair with Min now. I was delighted with Tornado Flyer and Melon too."

The revelation of the race was runner-up Tornado Flyer. The 12-1 shot fully justified the decision to run with a career-best performance and Cooper was delighted with the horse's run but disappointed he did not win.

He said: "Paul Townend told me on Friday that he was not as big a no-hoper as people might think. Willie told me to follow them around and see how much I could nick. 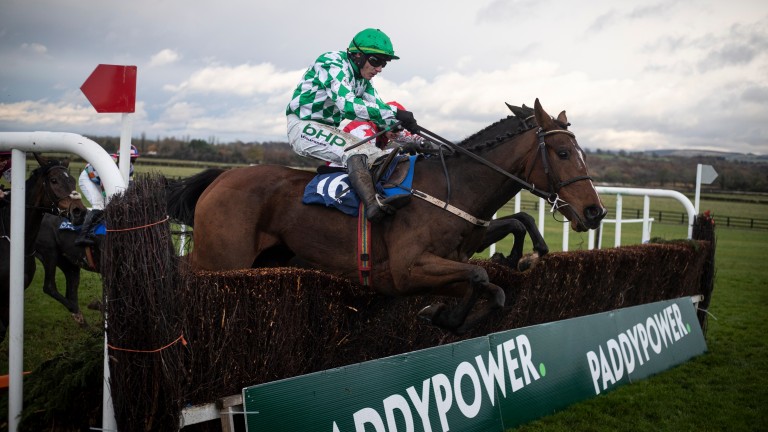 "I got excited going down to the last. I probably had half a length on Min and I got a flyer, but I always felt he was going to come back at me. It was a fair run."

Cooper added: "He jumped very well. I think he has improved and he looks well able to hold his own in that division. It's nice to get on a good one like that."

The one disappointing performance among the Mullins quartet was that of Allaho, who was last of the six finishers, beaten more than 33 lengths. Mullins said: "David [Mullins] said Allaho made two desperate mistakes which knocked the stuffing out of him."

The poor visibility forced the stewards to abandon the final four races on the card.

FIRST PUBLISHED 1:57PM, DEC 6 2020
I imagine all roads lead back to the Ryanair with Min now. I was delighted with Tornado Flyer and Melon too

What was the reaction to Gordon Elliott's return to the racecourse? Going down the High Chaparral route - could River Thames make a big splash? 'It's great to be back racing' - Gordon Elliott returns after suspension Expert analysis and key quotes as Harrington bids to continue fine form Gordon Elliott saddles first runners since suspension at Punchestown on Tuesday