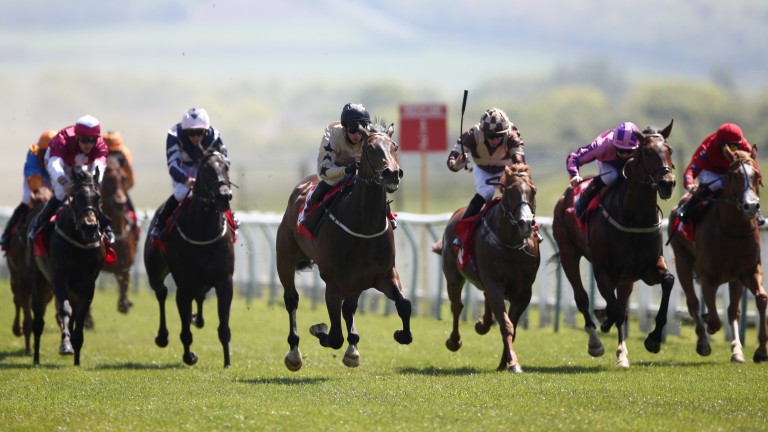 Rank outsiders Runninwild and Katie's Kitten made it a bank holiday to remember for their connections with a pair of shock victories at triple-figure odds within five minutes of each other at Redcar and Leicester on Monday afternoon.

Winless from 12 starts before Monday, 13 proved the lucky number for 100-1 shot Katie's Kitten as she made all in first-time blinkers in the mile fillies' handicap at Leicester (2.15).

Her odds were made to look puny in comparison to the Ann Duffield-trained Runninwild in the 6f maiden at Redcar (2.20) as he edged out Maywake by three parts of a length at odds of 200-1.

A speculative double on the winning duo would have returned eye-watering odds of 20,300-1.

'I think the owners had a bit on!'

The Mick Appleby-trained Katie's Kitten benefitted from a clever ride from apprentice jockey Theodore Ladd, who told Racing TV: "Mr Appleby told me to be as positive as you can and that the blinkers should hopefully get some ability out of her.

"Never in any of her races has she been in front and clear like that and I think she was waiting for something to come and challenge her. She's fairly keen at home so the people there have done a great job because if they let her rip she would be unrideable at the course.

"It's nice to get a reward for a filly that we didn't think had a lot of ability."

Appleby spoke of his delight for owners Fosnic Racing, who were present at the track for the surprise outcome, and the trainer said: "We've always thought she was good – she's on a low mark and the blinkers have clearly helped her out a lot. We wanted to try to pinch the race from the front and that's what we've been able to do. The owners were at the track and I think they had a bit on!"

The three-year-old Runninwild, ridden by David Allan, was winning for the first time at the third attempt, having been well beaten on both prior starts.

Happy Bank Holiday! (Well it is for those who like backing rags!) pic.twitter.com/d2qQDmTT99

Allan said: "He's very green still so he was looking around and just gawking at things, as they do, and he's absolutely massive, so it's a big horse to be running around.

"I had a few racegoers saying they wish they had money on and they would be retiring, but nobody is telling me they have."

While the majority of punters were left tearing their slips up, Ladbrokes reported that several mystic punters around the country were in a far more celebratory mood.

Ladbrokes spokesperson Nicola McGeady said: "A handful of bets ranging from £10-£25 were placed around the country on Katie’s Kitten, while a few punters both in shop and online had Runninwild, making it a bank holiday Monday to remember."

The burgeoning training partnership of Darryll Holland and assistant trainer Kieren Fallon claimed their first turf win as Silks Pass scored on debut in the 5f novice at Redcar.

The two-year-old son of Excelebration was the second yard winner for the ex-jockey training operation, which began sending out runners in March.

Danny Tudhope's day ended prematurely after injuring his knee in a freak accident at Leicester when leaving the stalls on Celestial Queen in the same race won by Katie’s Kitten.

Leicester clerk of the course Jimmy Stevenson reported that Tudhope – victorious on Lady Pacifico in the opening 1m4f fillies handicap – was taken via ambulance to Leicester Royal Infirmary.

FIRST PUBLISHED 3:21PM, MAY 31 2021
I had a few racegoers saying they wish they had money on and they would be retiring, but nobody is telling me they have