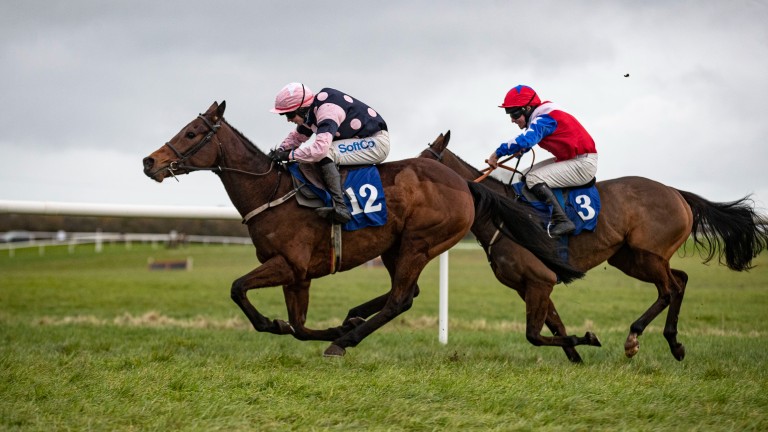 Braganza and Sean O'Keeffe go clear on the run-in to land the mares' maiden hurdle at Thurles
Patrick McCann
1 of 1
By Justin O'Hanlon 6:00PM, NOV 25 2021

Willie Mullins has not had many runners lately, but the champion trainer hasn't gone away, and with a Grade 1 weekend coming up a treble showed his runners are hitting form.

The unexpected one of the three was the long-absent Braganza, who survived a novicey round of jumping under Sean O'Keeffe to land the mares' maiden hurdle.

The daughter of Nathaniel had not been seen since finishing last of five in a novice event for two-year-olds at Chelmsford four years ago for Ed Dunlop.

Lengthy absences have not been a handicap for Mullins-trained horses, however, and this one showed considerable power to overcome her jumping errors, going away from the final flight to beat favourite and useful yardstick Monas Melody by six lengths.

Mullins said: "She's a nice mare and she surprised me today by winning – and winning well. She needs to improve her jumping and if she does with experience, she could be top-drawer material."

Paddy Power introduced her at 20-1 for the mares' novices hurdle at Cheltenham.

Sky's the limit for Ciel

Good hurdler Ciel De Neige looks as though he could be an even better chaser after the JP McManus-owned gelding made an impressive debut over fences in the opening beginners' chase.

He jumped well for Mark Walsh and showed plenty of pace in seeing off the challenge of main market rival Crosshill by four-and-a-half lengths.

"He jumped brilliant, it was very straightforward and I was delighted with him," said Walsh.

For Cilaos Emery, the step up to 2m6f in the Listed BetVictor Chase did not prove an issue as his victory was the centrepiece of the Mullins treble.

Apart from one mistake, he was foot perfect in scoring by a comfortable three lengths, something which could not be said about the runner-up and sole market rival Darver Star.

Rider Brian Hayes said: "He jumped well apart from one little mistake and he might just be enjoying being a bit more comfortable early on over a little bit further. As he's getting older he probably isn't getting any quicker."

Rider Eoin Walsh was not to be denied his share of the headlines as he carded what was a dramatic double.

The first leg was straightforward as he brought the 10-year-old Ciankyle from off the pace to win the 2m2f handicap chase for Dublin trainer Peter Cluskey.

The dramatic aspect came in the second leg, the concluding handicap hurdle, on the Des McDonogh-trained Peace Party.

In the well-known colours of owner-breeder Peter Newell, the gelding travelled strongly to the front between the last two flights but failed to pick up at the final flight when Walsh asked.

Walsh's battle with gravity lasted several strides before he finally scrambled back into the saddle to win by an easy eight lengths.

FIRST PUBLISHED 6:00PM, NOV 25 2021
She needs to improve her jumping and if she does with experience, she could be top drawer material