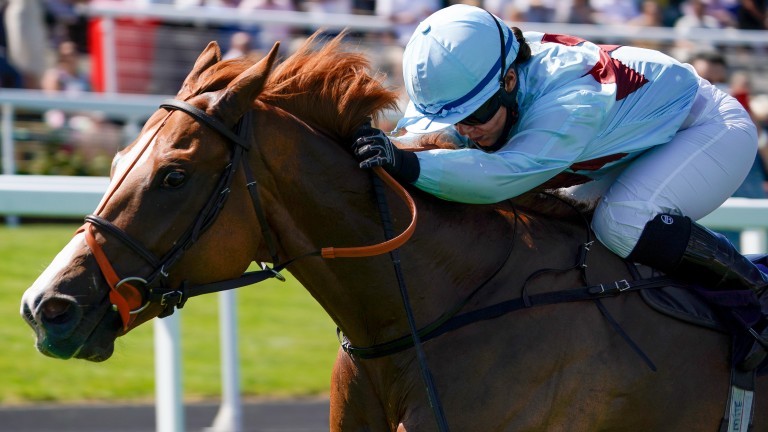 Under Curfew and Mollie Phillips team up for victory at Chepstow
Alan Crowhurst (Getty Images)
1 of 1
By Matt Rennie UPDATED 8:24PM, JUL 15 2021

Apprentice jockey Mollie Phillips continued her flying form as Under Curfew completed a rapid four-timer in a dramatic running of the 5f Silk Series handicap.

Phillips is riding on the crest of a wave at present and gained her seventh winner in the last two weeks aboard the five-year-old, who showed no ill-effects from his success at Bath two days prior to continue his rise through the ranks.

There was a nasty incident before the race began as Perfect Sign reared up and trapped Georgia Dobie in the stalls, but both emerged unscathed and were withdrawn from the contest. Ooh Is It was also withdrawn for failing to enter the stalls.

Phillips told Sky Sports Racing: "He's a little superstar. We thought that it would be a tough ask given how hard a race he had when winning two days ago, but he's so game and genuine."

Hollie Doyle was the first jockey this year to pass the 100 winners mark with a double at Yarmouth on Wednesday evening and she added to that tally when Tawaafoq landed the 6f handicap.

Doyle guided the Adrian Wintle-trained seven-year-old to his fourth course-and-distance success by one and a half lengths at the Welsh track to provide her with a 102nd victory already.

The jockey could add to that total as she heads to Newmarket on Friday evening for four rides before five mounts on Newbury's Super Sprint card on Saturday.

FIRST PUBLISHED 6:30PM, JUL 15 2021
We thought that it would be a tough ask given how hard a race he had when winning two days ago, but he's so game and genuine