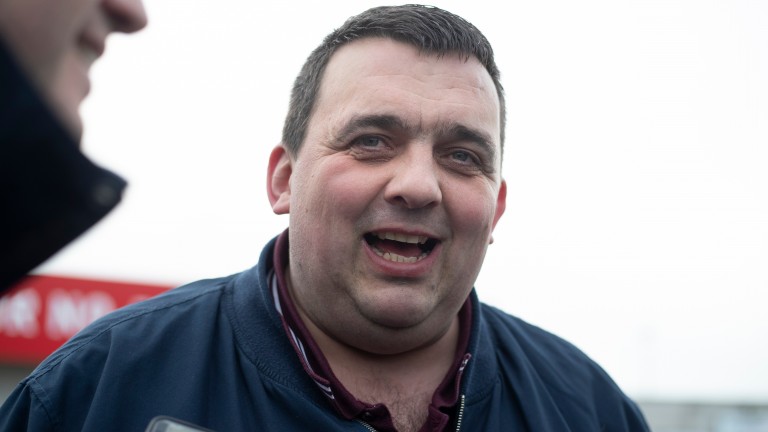 Noel Kelly: had plenty to say after the victory of Ellaat in the handicap hurdle at Thurles
Patrick McCann (racingpost.com/photos)
1 of 1
By Justin O'Hanlon UPDATED 5:22PM, OCT 21 2021

Derry trainer Noel Kelly has blasted the BHA over rules preventing Irish-trained horses running at Class 5 level or below over jumps in Britain.

After his 6-1 shot Ellaat won the 2m handicap hurdle Kelly said: "That horse could get into a Class 5 no problem; they just don't want us going over there and taking their prize-money, and Covid is only an excuse in my opinion.

"I think our people here should be putting more pressure on them to let our horses travel over.

"They let the big boys go over but not the small boys, but we have owners the same as them.

"It's hard to run horses here when you have races with 70 entries. Over there at least you can plan a date and go over for a week because you're sure to get in. But the way I'm fixed with these rules half of my owners are going to get sick of it."

A trip from his Draperstown base in County Derry 211 miles from Thurles began at 6.30am and after Ellaat's victory Kelly said: "I could run him somewhere like Hexham but I can't, and I would be quicker getting to Hexham than I would here. It's an absolute disgrace and something should be done about it."

As part of adjustments to its Covid-19 protocols in October 2020, the BHA does not permit horses trained abroad from competing in Class 5 and 6 handicaps/classified stakes on the Flat, and Class 5 handicaps over jumps.

The restriction was discussed at the Industry Racing Group in May, but the decision was made to continue with it, causing frustration for Irish trainers. The BHA said earlier this month there was no planned end date for the measure.

Ridden by Kelly's fellow Derryman Jody McGarvey, Ellatt showed plenty of resolution in holding off odds-on favourite Downthecellar by three-quarters of a length, the two pulling a dozen lengths clear of their rivals.

Kelly said: "He's a game, wee buck. I thought the ground was going to be too soft for him but he got away with it."

Foley gets it right on Stratum

The progression of young claimer Jack Foley this year has reached the stage where he has become a go-to jockey for champion trainer Willie Mullins, and handing him the reins on favourite Stratum in the 2m7f conditions hurdle proved a correct move.

The high-class Flat stayer was workmanlike in recording a six-length success over Doctor Duffy, and Foley, a grand-nephew of the late Tom Foley, expressed his gratitude at the opportunities he has been getting.

He said: "That's my fourth winner for Willie and he has been very good in the opportunities he has been giving me. Everyone in the yard has been brilliant to me. Ruby and David Casey are always looking after me and Paul Townend has been great with advice he has given me too."

FIRST PUBLISHED 4:47PM, OCT 21 2021
That horse could get into a Class 5 no problem; they just don't want us going over there and taking their prize-money

How can the BHA have missed the significance of Tylicki v Gibbons? 'I had it out with him' - owner Syd Hosie blasts trainer Ralph Smith after split Santini could return in the build-up to another big Saturday at Cheltenham Ferny Hollow flies to head of Arkle market as Mullins defends cautious approach What did we learn from an attritional John Durkan Chase? Easy return for Energumene as Champion Chase contender strolls home in Hilly Way