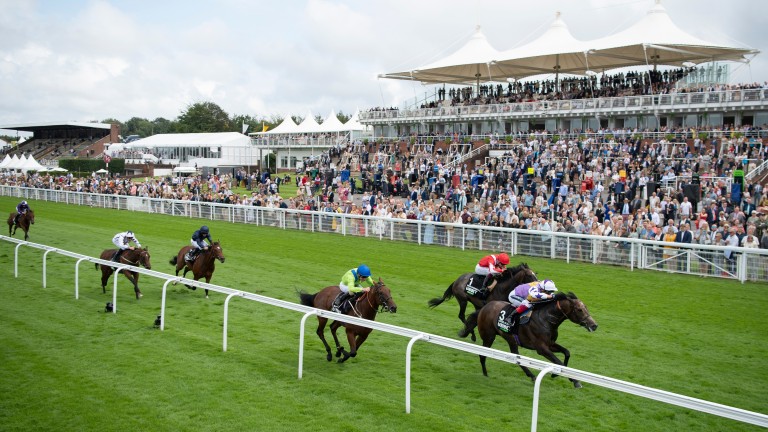 Angel Bleu and Frankie Dettori win the Unibet Vintage Stakes at Goodwood on Tuesday
Edward Whitaker
1 of 1
By Matt Butler UPDATED 8:56AM, JUL 28 2021

Horses make fools of us. That was the immediate thought of Frankie Dettori as he jumped off Angel Bleu following success in the Vintage Stakes.

The 50-year-old has seen more than most in racing but even he was surprised to hear Angel Bleu had been declared for the Unibet-backed Group 2 by Ralph Beckett – particularly as he had told both trainer and owner Marc Chan the horse needed a break after competing in Listed company at Ascot on Saturday.

Angel Bleu had finished second behind New Science on that occasion but the quick turnaround was not an issue as he went one place better to win the £150,000 race, the first leg of a Group 2 double for trainer and owner.

After safely completing his first flying dismount of the week, already in the knowledge he would not be riding Stradivarius in the Goodwood Cup later on Tuesday afternoon, Dettori said: “I told Ralph, ‘Look, just give him a little bit of a break because he’s a bit over the top at the moment’. I told Marc Chan, a friend of mine in Hong Kong, that I told Ralph to give him a break.

“Then Ralph on Sunday morning calls me to say, 'I’ve declared him at Goodwood on Tuesday'. I wonder what Marc thinks of me, the horse goes and wins as well. Horses make a fool of you.”

A free sweater, Angel Bleu was tackling a significantly different surface to the fast ground he encountered on King George day.

Dettori tried to settle him off the pace set by Austrian Theory, tracking those in behind alongside Berkshire Shadow, the Coventry Stakes winner and sent off the 13-8 favourite here.

Pushed along to challenge two furlongs out, he ducked right when coming upsides Austrian Theory, interfering with The Acropolis in the process. His challenge was effectively over but Angel Bleu kicked on and had the positional advantage to hold the late surge down the outside of Berkshire Shadow. 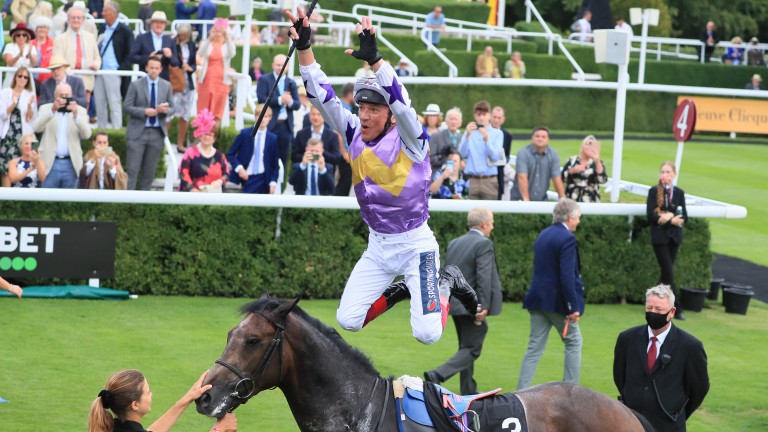 Dettori added: “A combination of running around the turn, soft ground, he was good going to post, it made a difference.

“He ducked right a little bit. He tries to please you too much, that’s why he sweats so much, but I think the ground helped and the bend helped. It just took his mind off it.”

Beckett's mind will now firmly be on future targets for his smart juvenile, having confirmed the weekend’s chain of events with Dettori. All paths could well lead to the Dewhurst.

Beckett said of the winner, handed quotes of 50-1 for next year’s 2,000 Guineas: “If we hadn’t declared and the field had fallen out like this I’d have felt really, really cross with myself. It’s worked out great. The rain last night, I could hardly believe my luck.

“I’m not sure America would suit him, he likes a bit of juice. He’s two out of two on soft ground now so I’d say we’ll think about the Dewhurst.”

Top claimer Charlie Todd not ruling out title bid as he recovers from injury Appleby lands big North American double as Walton Street and Yibir score Big move paying off for Trevor Whelan as he finally puts injury woes behind him Saffron Beach impresses on Limekilns as Kirby goes through the gears Where was Dettori? Where were the Brits? Irish Champions Weekend felt too Irish New races for next year's carnival with prize-money boost for World Cup card