'What else would I do at my age?' - 80-year-old trainer wins with only horse 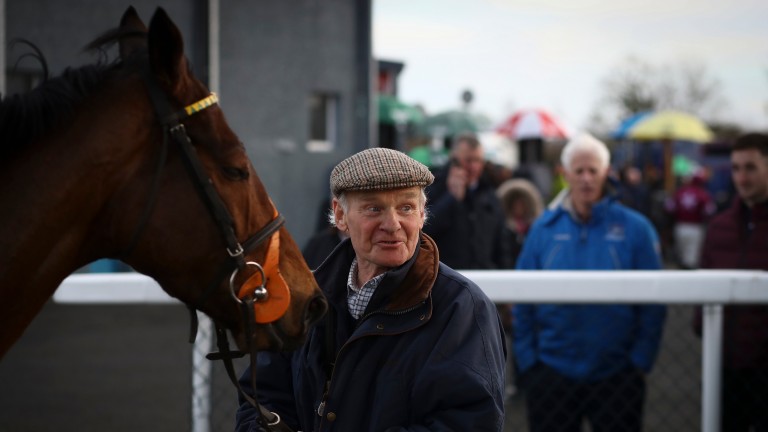 Frank Oakes: the 80-year-old trainer sent out his only horse in training to win on Monday
Patrick McCann (racingpost.com/photos)
1 of 1
By Brian Sheerin UPDATED 7:28PM, JUN 14 2021

Plans for Mountain Fox to go jumping this summer have been put on hold, his trainer Frank Oakes revealed in the glorious sunshine at Gowran Park on Monday, shortly after the only horse in his care scampered clear in the closing 1m5½f handicap (5.30).

The years have been kind to Oakes, who turned 80 just the other day and still finds the time to ride out Mountain Fox in the majority of his work.

There are many characters in this game and Oakes is one of those, the veteran handler making light of his achievements with Mountain Fox by quipping: "At my age, what else would I be doing?"

Whatever Oakes is doing is clearly working with Mountain Fox, for whom the help of Irish National-winning jockey Ricky Doyle was enlisted for a final piece of work last week.

Oakes explained: "I ride him every day myself, except on the weekends, when my daughter Wendy rides him. Other than that I do everything with him. I ride him out, put the shoes on him, everything.

"But when he worked on Wednesday, Ricky Doyle rode him for me and he said he'd nearly go and win for me. I said, 'That'll do'.

"I was going to ride him in the piece of work myself but I decided to get Ricky's opinion. He wasn't wrong and he won on the horse over hurdles before."

As for the race itself, Nathan Crosse pushed out Mountain Fox to win going away on the stands' side rail, the performance leaving Oakes of the opinion that his horse will be best kept to the level for now.

He said: "He's a super leaper and is crying out for a distance. The plan was to go jumping hurdles after this but that might change now. We'll see what the handicapper does."

Oakes added: "He's absolutely brilliant. I wish I had a few more like him."

It was business as usual for Colin Keane as the champion jockey rode a double. The first leg came aboard his boss Ger Lyons' Zola Sakura in the first division of the 1m1½f maiden. The second division also went the way of Keane, who came home on his own aboard the Dermot Weld-trained Tazaral.

Who is Frankie Dettori riding on day one at Royal Ascot on Tuesday?

FIRST PUBLISHED 7:00PM, JUN 14 2021
I ride him every day myself, except on the weekends, when my daughter Wendy rides him. Other than that I do everything with him