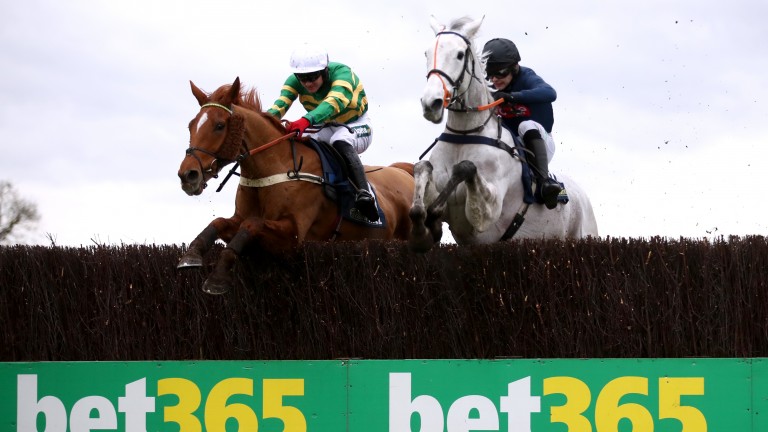 Canelo (left) and Snow Leopardess engage in a duel for the Rowland Meyrick
Pool
1 of 1
By Andrew Dietz UPDATED 7:42PM, DEC 26 2020

From three winners at Royal Ascot in June to a big-race strike at Wetherby on Boxing Day – Alan King really is a trainer for all seasons.

The master of Barbury Castle might be increasing his focus on the Flat after a remarkable year, but jumping remains at the forefront as Canelo emphasised with victory in the Grade 3 William Hill Rowland Meyrick Handicap Chase.

The JP McManus-owned Canelo travelled smoothly into the latter stages of the 3m contest under Tom Bellamy before fending off gutsy runner-up Snow Leopardess by half a length.

"It's nice to ride a good winner over jumps for Alan so he doesn't go all Flat, because he wants to," said the jockey with a wry smile.

"He's doing really well with the Flat string, but we'd like him to keep plenty of jumpers for the foreseeable future."

Canelo has improved markedly since being fitted with cheekpieces and handled the step up in trip in the manner of an exciting staying chaser.

"I thought I was going to go on and win by a length, but I couldn't get rid of Snow Leopardess, who's a proper mare," added Bellamy.

"He's really stepped up this season and held his form. He's always had plenty of ability, but most of his success has been since the cheekpieces went on.

"Now he knows how to race, he'll probably end up going further and could be one for a National at some stage."

On one of the busiest days of the year, the bookmakers got off to the perfect start when Ballycallan Fame caused a 125-1 shock in the first race of the day, the 2m3½f mares' novice hurdle.

Trained in North Lincolnshire by Nick Kent, Ballycallan Fame was pulled up in a Listed race on her last start in February when in the care of Dan Skelton.

Given a positive ride by conditional Charlie Hammond, the five-year-old opened up a big lead and was not for catching on her first start for Kent, whose main surprise was at the mare's price.

"It wasn't a massive shock to us," said the trainer on his second winner of the season. "She's been working extremely well, but our biggest concern is she's very keen.

"I expected her to stop in the home straight, but she was that far clear. She jumps so well and I didn't think we'd see anything of her until we went over fences."

Ballycallan Fame races in the colours of Wendy Wesley, having been left to her after the death in the summer of previous owner Bill Booth at the age of 94.

The father and daughter team of Simon and Amie Waugh recorded their first jumps victories of the season courtesy of Loughermore in the 2m3½f handicap hurdle.

The amateur rider said: "He does try, so you know you're going to get everything from him. He travelled well and the softer ground has helped him."

In August, Waugh was suspended for 14 days and her father fined £3,000 after Loughermore was deemed a non-trier when finishing last of six runners at Sedgefield.

"If the ground came up soft, he could go for the Lanzarote," said assistant trainer Alan O'Keeffe.

Did you know you can bet with youronline bookmaker without leaving the Racing Post app? Simply sign in to your existing bookmaker account via the accounts button and tap the odds buttons on aracecard to place bets

FIRST PUBLISHED 5:30PM, DEC 26 2020
He's always had plenty of ability, but most of his success has been since the cheekpieces went on

Spring stars Tritonic and Talkischeap primed for big day at Kempton McNeill: Triumph hope Tritonic has the right profile to break my festival duck 'He could be a massive factor' - which weekend winner impressed our panel? 'His jumping was deadly' - Gold Cup hope Champ runs a cracker behind Sceau Royal Fuller lets out a scream of joy as brave mare gives her a first Grade 2 victory 'I was happy with that' - Henderson hotpot back on course for festival