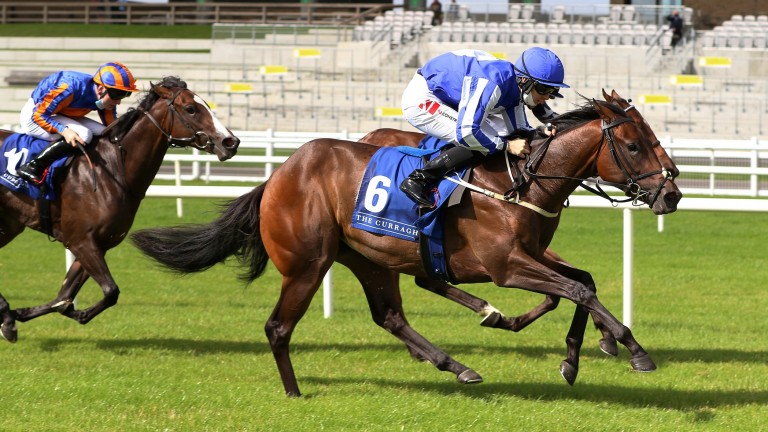 Head Mistress: wins at Down Royal and the Curragh
Caroline Norris (racingpost.com/photos)
1 of 1
By Tom Collins and Andrew Dietz UPDATED 7:18PM, SEP 17 2021

Race planning is crucial to achieving success as a trainer or owner as deciding the best option for each horse can often prove difficult. However, when there is a bonus on offer, such as with the IRE incentive for this race, it allows connections to prime their talent for a specific target.

The IRE incentive, which has brought together a bumper field for this Group 3, rewards owners of Irish-bred runners with a £10,000 future sales bonus should their horse win one of the designated races. As a result, it is no surprise that trainer Ger Lyons ships unbeaten filly Head Mistress across the Irish Sea in search of an attractive pay cheque.

Although Head Mistress has won both races, the main takeaway from her career to date is that she tends to hit a flat spot. The daughter of Profitable hit a high of 47-1 when making her debut at Down Royal before engaging sixth gear once switched wide, while she appeared beaten last time in the Listed Curragh Stakes (hit 17-1) before scooting home.

Stepping up to 6f should suit, although Lyons is just 3-28 with two-year-olds in Britain. If you like Head Mistress, consider an in-running play.

Experienced runners Hellomydarlin, whose official rating of 102 probably overestimates her ability, and Friday's Harry Rosebery fifth Canonized set the standard but lack the scope for progression. The same applies to Crazyland and Misty Ayr, both of whom need to step up on recent performances.

Haydock debut winner Rishes Baar is eligible for the bonus and caught the eye with a powerful late burst to run down Lowther fourth Vertiginous on her sole start. She recorded a time well up to scratch and rates an intriguing runner at likely double-figure odds.

Carlisle maiden winner Hala Hala Athmani, a scopey half-sister to Group 1 winner Hello Youmzain, received strong support before sluicing up in a weak race first time up, so it may be wise to watch the betting again.
Race analysis by Tom Collins

Hellomydarlin 'should run a huge race'

Trainer George Boughey will be aiming to show his knack with two-year-olds again as the consistent Hellomydarlin bids for a first success since her debut in June.

Hellomydarlin has been highly tried since beating Zain Claudette, who has subsequently won the Princess Margaret at Ascot and Lowther at York, on her first start at Goodwood.

She has performed creditably on a number of occasions since, including when third under top weight in a valuable nursery at York's Ebor meeting. 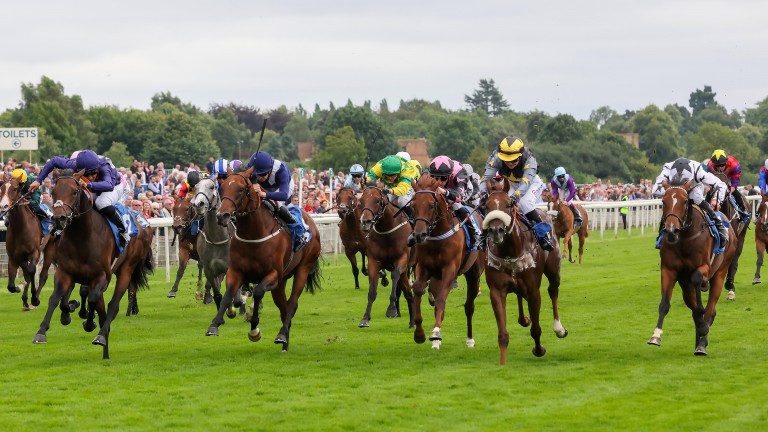 Boughey, who has a 22 per cent strike-rate with his juveniles this season, said: "She's been a model of consistency, whether running in Britain or France. I don't think they'll get a huge amount of rain, so she'll like the ground. She has the highest rating in the field and should run a huge race."

William Haggas, trainer of Canonized
She's tough and genuine. I've only run a horse on consecutive days once before, and it worked out well. I once went to see Martin Pipe, and he told me that if a horse runs on consecutive days the second run will invariably be better.

Adam Ryan, assistant to Kevin Ryan, trainer of Hala Hala Athmani and Sadmah
Hala Hala Athmani was impressive on her debut at Carlisle. It was a professional performance, but this represents a big step up in class. Sadmah didn't handle the quick ground at Newmarket, but put that behind her with a Chester win.

Gary Carroll, rider of Head Mistress
She has come forward nicely since her last run at the Curragh and the step up in trip from five to six will be a big help. She's gone from strength to strength and, fingers crossed, that will continue here.

David O'Meara, trainer of Rishes Baar
We were pleased with her debut run – we thought she was useful but we didn't expect to win like she did. It's a big step up in class but she's in good form and will appreciate the fast ground.

Kevin Philippart de Foy, trainer of Scot's Grace
She won well on her first start at Kempton and was then unlucky in the Sirenia back there two weeks ago. She's been in good form since and I'm hoping for fast ground. She's showing the same potential on grass at home to her all-weather form.
Reporting by Andrew Dietz

2.50 Newbury: gelded Al Aasy should be close to his best on return says William Haggas

3.40 Ayr: 'Hopefully this will be his last run in a handicap' – key Ayr Gold Cup quotes

3.40 Ayr: why Great Ambassador may find himself in the worst possible position (Members' Club)

4.30 Gowran Park: 'It's probably the first time all season she's got her proper ground'

FIRST PUBLISHED 6:00PM, SEP 17 2021
I once went to see Martin Pipe, and he told me that if a horse runs on consecutive days the second run will invariably be better

Which of the Gosden pair might prevail in a competitive running of the Balmoral? Adayar v Mishriff: Graeme Rodway crunches the numbers to reveal who is fastest Charlie Appleby seeks flying start in the Zetland with promising Godolphin pair 'We know more about him now' - can speedy Coroebus last home in Autumn Stakes? Will a 1,000 Guineas contender emerge in wide-open Oh So Sharp Stakes?