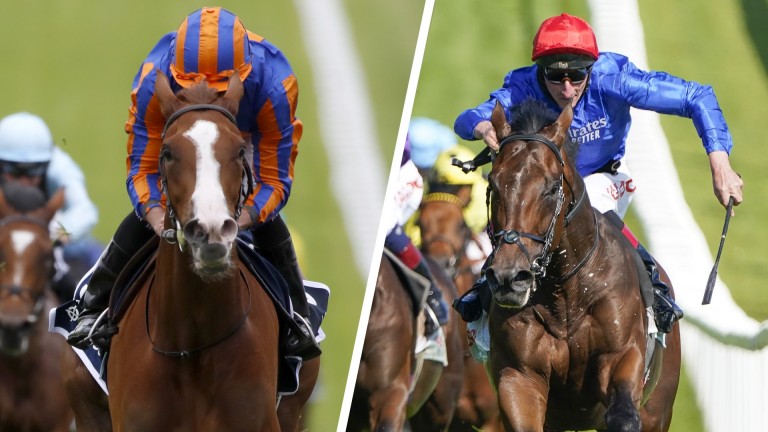 Love, the Ballydoyle superfilly who has the potential to replace the retired Enable in terms of public affection, is reported in prime form to continue the excellent recent record of fillies and mares in the King George VI And Queen Elizabeth Qipco Stakes.

The concession of 8lb to the Derby winner Adayar makes it a tough task, but trainer Aidan O'Brien is upbeat about her prospects of managing to do so if the ground remains fast.

Good to firm was Friday's going description, but between eight and 13 millimetres of rain is forecast in possible thunderstorms on Saturday, much of that coming during racing.

Love, whose rampant, runaway wins in the 1,000 Guineas, Oaks and Yorkshire Oaks last season on good ground simply took the breath away, was more workmanlike in the Prince of Wales's Stakes on her 2021 return at the royal meeting last month.

That final-furlong battle over a 1m2f trip below her optimum should have blown any cobwebs away and put her spot-on for Ascot's midsummer showpiece.

Older runners have a vastly superior record to three-year-olds in the King George since 1988. Twenty two winners have been aged four and upwards, with the Classic generation responsible for 11 victories.

"Love is very good," O'Brien said. "We're all very happy with her and the fact that she's been around the track is a big help. She's very genuine, you saw that in her the last day. The trip is fine and the ground should be too."

O'Brien also runs Broome in a race he has landed four times. He said: "Broome is a very straightforward and consistent horse. We were delighted with his win in France, where he showed a really good attitude. We haven't done a whole lot with him since, but he's been in good form." 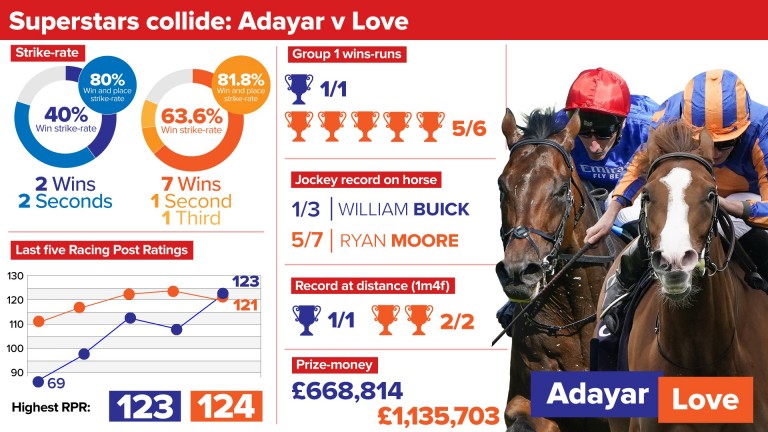 'I genuinely think Adayar should be bang there'

William Buick believes that a weight-for-age allowance of up to 11lb that the three-year-old Adayar receives from his elders gives him a significant advantage in a crackerjack of a King George.

The son of Frankel oozed class when landing the Derby by four and a half lengths under Adam Kirby from Mojo Star, and he bids to become only the fifth Derby winner since 1988 to go on to take the Ascot Group 1.

For a long time during the last century, the King George was viewed as the natural stepping-stone for a Derby winner en route to the Arc, but that is no longer the case.

Twelve winners of the premier Classic have attempted the famous double since 1988, with only Nashwan, Generous, Lammtarra and Galileo managing to do so. In fact, only three Derby winners since Galileo in 2001 have tackled the King George, with Kris Kin, third to Alamshar in 2003, faring best of them.

Buick, who experienced a rear view of Adayar at Epsom as he was riding the third, Hurricane Lane, said: "It's a stellar field. It's got a lot of the best middle-distance horses around at the moment – it's got three-year-olds against older horses, and it's got fillies against colts.

"It also has the Derby winner, which isn't that common these days. It's going to be a great race."

Buick, who won the race aboard Nathaniel in 2011, added: "The allowance that the three-year-olds get at this time of the year is very attractive.

"You would have to say Adayar is a very good Derby winner. He's an uncomplicated horse, too, and that helps."

Adayar's trainer Charlie Appleby, who has yet to win the King George, said: "Love is going to go off favourite, and deservedly so on what she's achieved, but Adayar receives the weight allowance and I genuinely think he should be bang there.

"It's a huge occasion. It's a challenge, stepping up into the big boys' division at a mile and a half, but I've been delighted with his preparation and he looks a million dollars. It looks as if there will be some pace in the race, which will suit us.

"It's going to be a fantastic race to watch hopefully, and whoever wins it is going to be king of the mile-and-a-half division for the foreseeable future."

Thady Gosden, joint-trainer of Mishriff
It's a small, elite field. Mishriff has won over the trip before, but it's the meeting of the best of the older horses and three-year-olds so it's competitive enough and the weight allowance for the three-year-olds makes a big difference. He's come on for his run at Sandown when he was a little ring-rusty and won't mind any rain as he has plenty of form with ease in the ground.

David Menuisier, trainer of Wonderful Tonight
We'll give her every possible chance and wait as long as we possibly can. There are thunderstorms forecast and a good chance of heavy showers. That doesn't mean Ascot will get them, but as long as it remains a possibility we owe it to the filly to keep her in the race and take her to Ascot on Saturday, where we will sit and wait. What will I do if the ground is good? I'll play it by ear and make a decision. If it doesn't rain we'll come home and enjoy the drive back, but she's been grand since Royal Ascot and she's definitely ready for another run. The King George is one of the best races in the world, and we'd love to be part of it.

Martyn Meade, trainer of Lone Eagle
He deserves to be there on his run at the Curragh. We can go on quick ground because we proved that in Ireland. He came out of the Irish Derby without a worry. He's quick through the gears and we'll see at Ascot whether he'll really go to the top or what his level is. We were just about reaching for the champagne at the furlong marker in Ireland, so it was hard to bear.

FIRST PUBLISHED 6:00PM, JUL 23 2021
The allowance that the three-year-olds get at this time of the year is very attractive