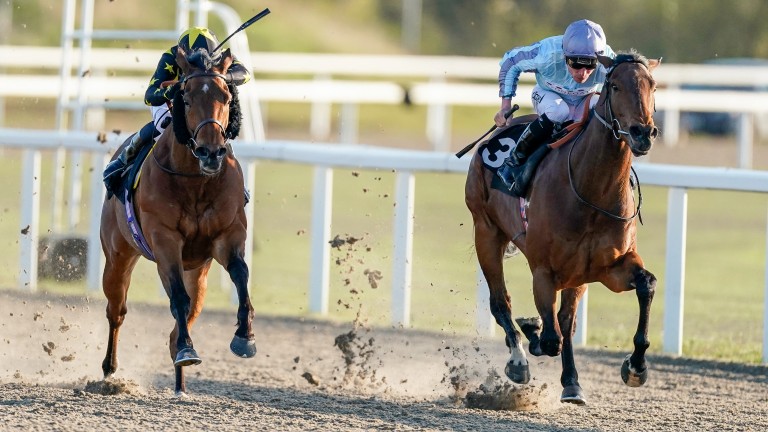 Kieran Shoemark is back aboard topweight May Sonic (right)
Alan Crowhurst
1 of 1
By Richard Birch and David Milnes UPDATED 6:04PM, JUL 19 2021

In the last five years this £19,000 Class 2 sprint has been run there has been just one three-year-old winner, the Sir Michael Stoute-trained Alkaraama in 2019.

There are only two representatives from that age group this time, namely Stylish Performer, who appears poorly drawn in stall eight, and likely outsider Giorgio Vasari.

Arguably the key piece of form to unlocking the puzzle is a three-runner Chelmsford 6f conditions event in April in which May Sonic, one of only two course and distance scorers on show, beat Aljady by a nose off level weights.

Aljady is now 5lb better off with his photo-finish conqueror, and holds every chance of turning the tables from an ace draw in stall two.

Although unplaced in all four subsequent starts over 5f, the Robert Cowell-trained sprinter has been highly tried in events such as the Group 3 Palace House Stakes at Newmarket, and was by no means disgraced when 12th of 18 behind Significantly in a hotly contested Ascot handicap last time.

Five of his seven career wins have been recorded at 6f, so this step back up in trip looks firmly in his favour.

Sir Oliver – who carries just 8st 5lb when Stefano Cherchi's 5lb claim is taken into consideration – receives a significant amount of weight from those rivals towards the head of the handicap, and also merits careful scrutiny from a decent launchpad in stall three.

The four-year-old usually races prominently, tactics which are suited to Chelmsford where it is often difficult to come from off the pace.
Race analysis by Richard Birch

Kieran Shoemark, rider of May Sonic
He put up a huge performance to be second at Newcastle last time and he's a previous course and distance winner. He's versatile regarding tactics so would have a good chance.

Tim Palin, spokesman for Middleham Park Racing, owners of Lexington Dash
His form at Chelmsford is stronger than that of Newcastle but he could still be in the handicapper's grasp, which is why we're claiming off him. There aren't any other races for him until August 14 so we're going here.

Stuart Williams, trainer of Papa Stour
He's back on the all-weather and this might be short of his best [trip] but he goes there in good form and I expect him to run well.

Chris Dwyer, trainer of Sir Oliver
Stefano Cherchi gets on well with him and he's a handy horse who we expect to be in the mix in an open race. It's great prize-money and hopefully we can get a piece of it.

Karl Burke, trainer of Stylish Performer
He's drawn eight of nine which doesn't sound ideal but it will keep him out of the kickback. He enjoys the surface at Wolverhampton so this should be suitable for him.
Reporting by David Milnes