Persian King stamped his class over his rivals in the Group 1 Prix d’Ispahan at Chantilly on Sunday as he continued to re-establish his reputation as one of the sport’s most exciting participants.

In doing so he put himself in line for what is building up to be a mouthwatering showdown with Palace Pier and Romanised in the Prix Jacques le Marois at Deauville on August 16.

His trainer Andre Fabre has shown patience mixed with the knowledge of when to push on with the strapping son of Kingman, who was making his third start back since suffering injury in last season's Prix du Jockey Club and who his trainer still sent for a racecourse gallop five days prior to this latest assignment.

"He's given us some heartaches and some headaches as well," said Fabre. "He's a fantastic athlete and it's quite common for big horses like that to need a bit of time.

"He's going to run in August and the obvious option is the Prix Jacques le Marois. The other option – and it really is just an option – is the Juddmonte International at York. But for now it’s going to be the Marois."

Winner of last year’s Poule d’Essai des Poulains for Fabre, Persian King was beaten when favourite for the Prix du Jockey Club and also lost out on his comeback run last month.

However, a smooth win at Saint-Cloud was backed up by a dominant display under Pierre-Charles Boudot at Chantilly, as he loomed up and passed front-runner Pogo with ease before being pushed out to defeat Stormy Antarctic, who was second.

Anthony Stroud, representing Ballymore Thoroughbreds, part-owners of Persian King with Godolphin, said: "It’s been step-by-step and this was the plan. It’s always pleasing to get them back after being off for so long. 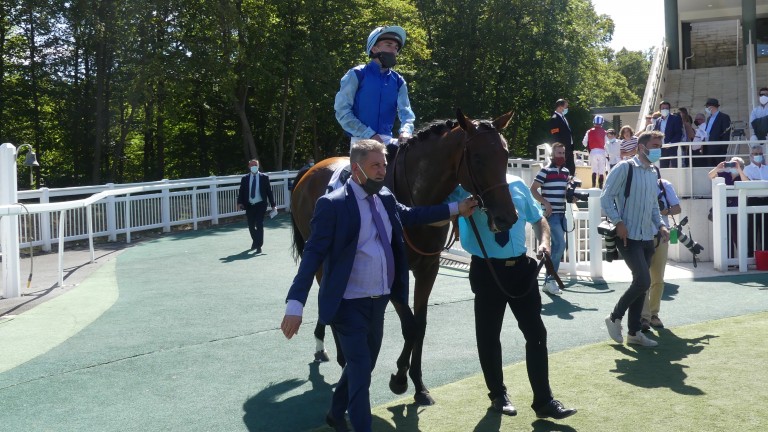 Asked whether he was worried when Persian King found himself with no cover on the outside of the leading duo, Stroud said: "Truthfully no, because I think he's a very good horse. Pierre-Charles has ridden him in all his races and he knows him very well. He's get very good tactical speed this horse so he can manoeuvre within a race. Any champion needs to have tactical speed and he can quicken and then quicken again."

Stormy Antarctic back to his best

If there was another set of connections that must have enjoyed watching the closing stages, it must have been those of seven-year-old Stormy Antarctic, who reversed a heavy defeat to Pogo (third) at Windsor last month.

His trainer Ed Walker said: "He was second to Johannes Vermeer as a two-year-old and I think that's five Group 1s he's been second in now. There can't be many horses in the world that deserve a Group 1 more than him. Lord, I hope it happens for him one day but I’m enormously proud of him. 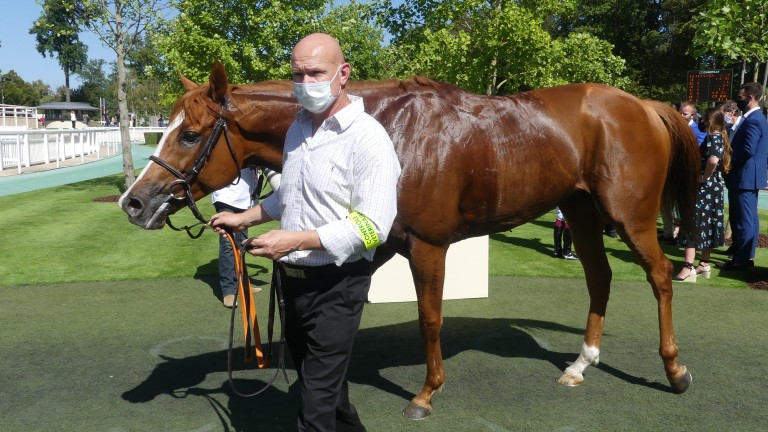 "It's a big relief as well. He's had a couple of dodgy runs and even I – as his biggest believer – was beginning to wonder whether his best was behind him. He'd run so many races over so many years where he was within a pound or two of his best, just super-consistent.

"The last couple of runs last year and the first couple this year [were not great] and then to bounce back to arguably as good as ever. He's been beaten by a very good horse. If you’re going to get beaten, make it to a Guineas winner and a Derby second.

"I was nervous about the ground and Alexis [Badel] said he could have done with a bit of rain. That's why he is just so remarkable and so versatile. He is why we do what we do. He's a great personality and he just has so much going for him."

FIRST PUBLISHED 3:43PM, JUL 19 2020
Any champion needs to have tactical speed and he can quicken and then quicken again

Ed Walker confident Starman can be a Diamond Jubilee sensation 'He's in good form and on a good mark' - hot trainer hoping for pre-Ascot boost Tom George wins more than €180,000 prize-money in three-month French stint Van Gogh in Jockey Club picture as Stephanie Nigge prepares first runners Plenty of chances in a busy week - plus my thoughts on the Epsom Derby There is a horse to make us dream in France - but not in Sunday's Classic