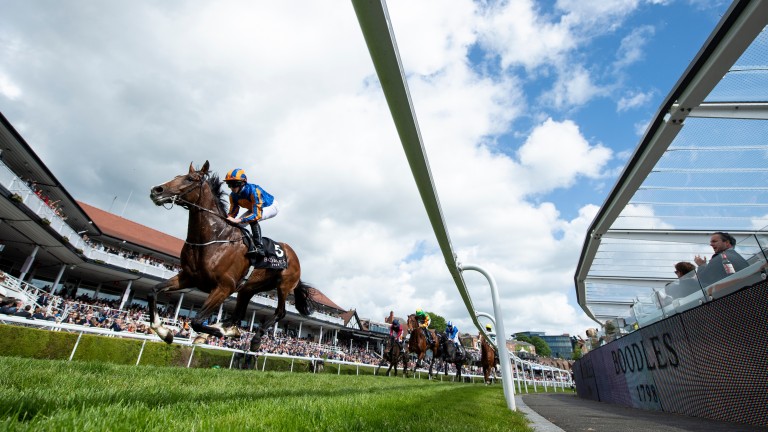 Idaho and Ryan Moore are comfortably clear at the line
Edward Whitaker
1 of 1
By Andrew Dietz UPDATED 5:31PM, MAY 10 2018

You can never have too many options – Aidan O'Brien knows that better than most.

The meticulous Ballydoyle trainer arrived at Chester with a plan already mapped out for Idaho, but after an impressive display of staying power from the Ryan Moore-ridden 8-11 favourite, he left the Roodee thinking about ripping it up and starting again.

"We came here with a view to going back to the Coronation and King George but Ryan was very happy with how well he stayed and we could look at another plan if needed," said O'Brien. "It leaves us with more options."

Running without a penalty on a first outing outside Group 1 company since winning last season's Hardwicke Stakes, Idaho was settled off the pace set by Muntahaa.

Moore, never a man to blink first, bided his time before a parting of the sea at the cutaway left him with a dream run up the inside rail.

It looked a crucial moment as the race unfolded but such was the manner of Idaho's finishing effort it was probably elementary as he pulled away to win by three and half lengths from Danehill Kodiac, with Elidor running well back in third.

Despite continuing his usual trait of sweating up beforehand the five-year-old, a brother to all-time leading European-trained money-earner Highland Reel, is developing all the time, according to O'Brien.

"He's maturing well and starting to do things right," said the trainer, who celebrated a fourth success in the race. "He's travelled the world and is getting very professional now. It was good to see him pull clear the way he did and Ryan said he didn't think he would have any problems going further." 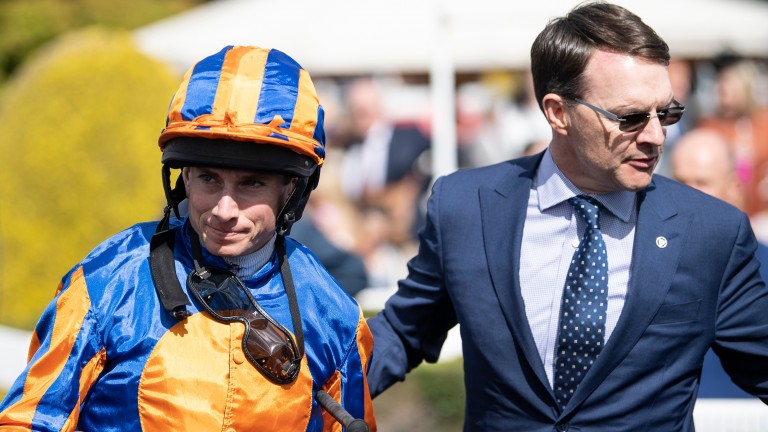 Winning team: Ryan Moore and Aidan O'Brien after their big-race double
Edward Whitaker
Cup races could well come into play and William Hill went 12-1 (from 14) for the Gold Cup, a market in which O'Brien is responsible for ante-post favourite and 2016 winner Order Of St George.

Idaho was also cut to 9-1 (from 20) for the Investec Coronation Cup by Sky Bet and given a first show of 12-1 for the Qipco-sponsored King George by Paddy Power.

Like O'Brien, Moore was pleased to get a horse who has run in five different countries since finishing third in last season's King George back in the winning groove.

"He was down in class and slightly up in trip and the race has suited him well," said the rider. "He's run in all the best races over the world and wasn't far off some very good horses in the Japan Cup and deserved to get back to winning ways."

Danehill Kodiac, runner-up to Defoe on his comeback at Newbury, ran with great credit considering he was conceding 3lb to the winner.

His trainer Richard Hannon said: "He's probably run to about 115 there and was beaten by a better horse. When these Group 1 horses move out of Group 2s and Group 3s, he's going to get one."

FIRST PUBLISHED 3:48PM, MAY 10 2018
We came here with a view to going back to the Coronation and King George, but Ryan was very happy with how he stayed and we could look at another plan