Talk of the Tracks CHALLENGE STAKES

Limato head and shoulders clear of rivals in Challenge Stakes 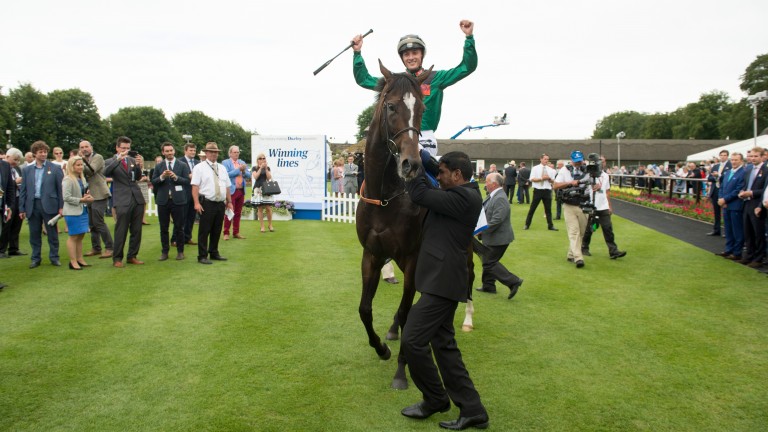 Limato has not been the luckiest horse this year – his search for a quick surface often thwarted by a wet summer – and on those occasions when he has found it in the presence of superstars such as Harry Angel and The Tin Man. But boy is he good and he reminded everyone by doing an absolute demolition job on the Godolphin Stud And Stable Staff Awards Challenge Stakes.

Races run over distances short of a mile are normally decided by heads and necks. Not this one. Limato powered three and a half lengths clear of 11-2 shot Massaat to justify 6-4 favouritism, with the consistent and tough 66-1 hope Gordon Lord Byron in third – a further length and a half adrift.

Harry Bentley came stands' side and tracked the eventual runner-up, before pulling out and putting his mount's nose in the air as they reached the Dip. The short but sharp descent helped Henry Candy's stable star hit overdrive and from that point on he was not for catching, stretching clear in a manner that made good horses look ordinary.

"I'm actually amazed how well he ran at Ascot and in the July Cup given how much the winter's activities took out of him and at Goodwood I guess we just ran a bit too soon and the ground was too soft. It's great to see him back to his old self," said Candy.

"He won't be racing again this season, I've been keeping him ticking over in the hope that we got some decent ground and it's paid off, but he's been going up the gallops for long enough now.

"Forcing him to get ready to go to Dubai at the beginning of the year really drained him. It's very unnatural for our horses at that altitude to be galloping in January and February. I thought he was okay until I went to put the saddle on him when I thought 'that doesn't look like the horse at all'. I know it was bad ground but I made a cock up forcing him to get there.

"He will have a proper holiday now."

When asked whether he would consider going back up to a mile again next year, Candy added: "Very much so, I think that's his game now. He's changed shape quite a lot and he's a big rangey horse now, he's crying out for a mile. He settles well in his races and he wasn't stopping up the hill there.

"The last time he ran in the Lockinge he wasn't quite right and the ground was appalling, but he still ran well. I would love to run him in that race again, so long as the ground is decent."