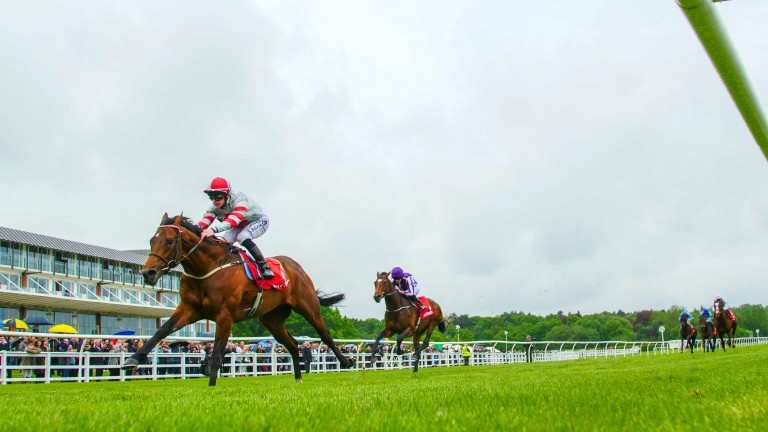 Knight To Behold and Richard Kingscote aren't for catching in the Lingfield Derby Trial
Mark Cranham
1 of 1
By Graham Dench UPDATED 6:11PM, MAY 12 2018

Harry Dunlop is entitled to dream of the Classic success that has punctuated the distinguished careers of his father John and brother Ed after Knight To Behold ran riot in the Betfred Derby Trial and came home three and a quarter lengths clear of odds-on Ballydoyle hope Kew Gardens.

Dunlop and the colt's enterprising rider Richard Kingscote are well aware the tactics employed so successfully here – he was a good ten lengths clear at one point and never looked likely to be reeled in – seldom come off in the Derby itself, but they insist Knight To Behold is not one dimensional and will settle with cover.

However, he can still be backed at as big as 20-1 for the June 2 Investec-sponsored Epsom Classic. 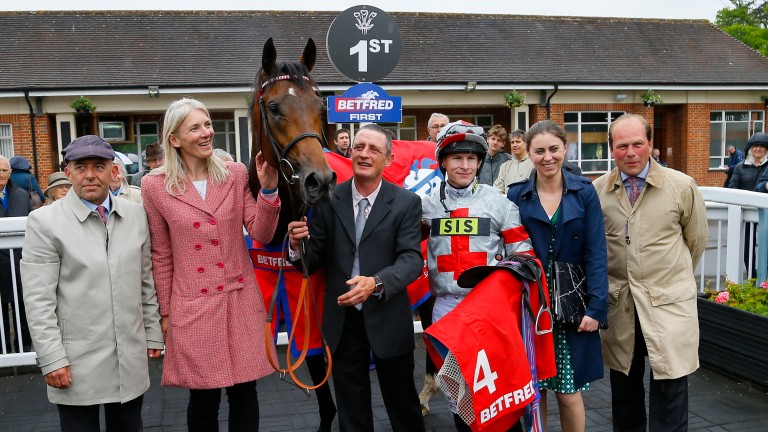 Dunlop, whose father won the Derby with Shirley Heights and Erhaab, said: "It's very exciting for us to be taking on these big guns. I'm a bit croaky after that!

"He's a funny horse and quite hard to gauge, but he's improved a lot from last year. He was very babyish, but today he was up for it and you could do what you like with him, which is the sign of a good horse."

He added: "The Derby is certainly an option. Mr Jones [owner Neil Jones, who had St Leger winner Millenary with John Dunlop and Derby third Let The Lion Roar with John Oxx] is keen on Royal Ascot as well, but I think the way he won here you've got to have a go. I hope so anyway.

"It was nice to beat an O'Brien horse, and although conditions were a bit odd with the rain and the watering he quickened away and should improve quite a lot as he's had niggly things wrong with him."

Kingscote, seen to such good effect from a bad draw on sprinter Kachy at Chester the day before, said: "He was ready to run and once I let him go to the front he pricked his ears and was lovely. At the same time, when I did squeeze he responded.

"It would be hard to win a Derby from the front but on the gallops once he's in behind he's no trouble, so I'm sure he'll settle given cover off a proper gallop. I wouldn't be concerned about that."

Kew Gardens was the only rival to look even a possible danger in the straight, but he hung left over a furlong out [it was subsequently reported he had lost a shoe] before keeping on again. Aidan O'Brien has plenty of stronger Derby candidates and is unlikely to lose too much sleep.

Corelli, another seven lengths back in third, was immediately ruled out of the Epsom reckoning in favour of a St Leger preparation.

Trainer John Gosden said: "We'll take our time with Corelli, who is more of a Leger type. The race all happened a bit quick for him – full marks to Richard [Kingscote] on the front end – but he's run a nice race.

"He's one for the second half of the year as he's quite immature. He definitely won't run at Epsom and I would think we should wait for something like the Bahrain Trophy, which is more likely than the King Edward VII Stakes."

FIRST PUBLISHED 2:41PM, MAY 12 2018
It would be hard to win a Derby from the front but on the gallops once he's in behind he's no trouble, so I'm sure he'll settle given cover