Six things to watch out for in the Molecomb Stakes 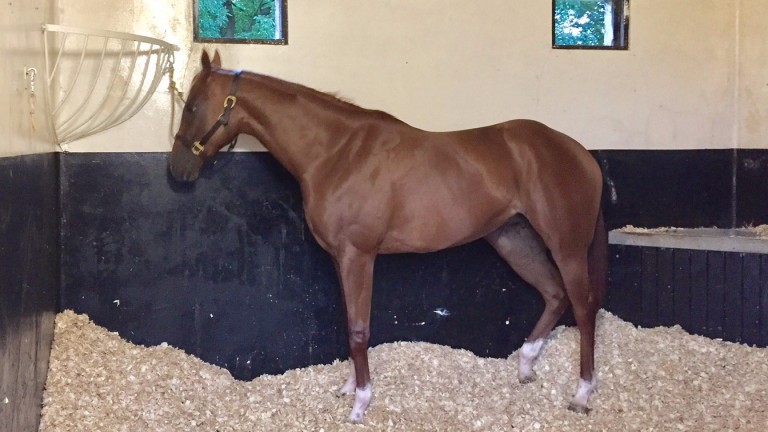 Wesley Ward, who has his first runner at the Goodwood with the speedy Happy Like A Fool, flew into the course a day early on Tuesday to check out the unique undulations.

If all goes to plan, the Royal Ascot runner-up could be spending more time in Europe, with an ambitious crack at the Group 1 Prix de l'Abbaye on her autumn agenda, a race last won by a juvenile in 1978.

Happy Like A Fool, to be ridden by Ryan Moore in the absence of the injured Mike Smith, was regarded by many as US trainer Ward's two-year-old Royal Ascot banker this year when turned over by Heartache in the Queen Mary, but connections are confident she can get back on track at Goodwood as long as the rains stay away.

Ward had the daughter of Distorted Humor – one of three fillies he left at the National Stud in Newmarket to run through summer – in mind for the Molecomb even before her Ascot reversal and thinks the track will play to her strengths.

Since Ward was last here, Happy Like A Fool has enjoyed plenty of pampering, including swimming and many spa sessions over at David Lanigan's yard – for which there was a reason.

He explained: "We thought she may have had a shin after Ascot but she seems fine now and her work has been good. She's a very fast filly and they tell me Goodwood is a very fast track. I've always wanted a runner there."

One problem could be her draw, which is wide in stall three, but Ward has other things to worry about.

He said: "I don't know about the gate, perhaps they'll all follow us anyway. I'm more concerned with the ground – I don't like this word 'soft' too much."

Whatever the drawbacks, the trainer is already planning a big autumn in Europe for his juvenile.

He added: "After this we could look at the Prix Morny, which I like, although it might come a bit quick, or possibly the Cheveley Park. After that, I've never before had a runner in the Prix de l'Abbaye and I see the two-year-olds get plenty of weight."

Unlike many of these, Havana Grey is a five-furlong specialist, having raced exclusively at the minimum trip for all five starts, winning three of them, including twice at Listed level at Sandown.

He has also raced exclusively on good-to-firm ground, so trainer Karl Burke is keeping a close eye on the weather.

He said: "Havana Grey is a very quick horse, goes there in good shape and has a decent draw close to the rail in ten.

"What we're mainly worried about is the forecast, as they say it may be wet in the morning and we prefer it fast."

Connections of Invincible Army are keeping their options open by also declaring the recent Newmarket third in Thursday's Group 2 Richmond Stakes and will make a call on Wednesday morning.

James Tate's youngster was sent off favourite in the Group 2 July Stakes after winning his maiden in devastating style, but the front-runner faded late into the minor placing behind Cardsharp.

In contrast to many of these, the son of Invincible Spirit does have prior knowledge of his surroundings, having finished second on his debut at Goodwood in May.

Bruce Raymond, racing manager to owner Saeed Manana, said: "We're a bit worried about the rain that's forecast so we might have to run him sooner rather than later. He's very quick but we'll ride him less prominently this time."

To Wafij 'should be competitive'

Coming out of stall 12, Roger Varian's runner To Wafij will be well away from US hotpot Happy Like A Fool and may be able to dominate up the rail.

The son of Kodiac finished behind Havana Grey at Sandown last time but was doing his best work late.

Varian said: "To Wafij ran a big race from a tricky draw in the Dragon Stakes at Sandown and the handicapper has taken an upbeat view over the quality of that form.

"I think this fast five will suit him well and he should be very competitive.”

The pink and green silks of Khalid Abdullah are not carried that often in two-year-old races over five furlongs but Hugo Palmer is giving it a go with the speedy Encrypted, whose half-brother Impart did win over the minimum trip.

A winner over six furlongs on the all-weather at Kempton, the son of Showcasing was a bit free on his return to turf at York last time.

Palmer said: "I expect a Showcasing to handle the ground better than a Distorted Humor [Happy Like A Fool] and Encrypted is a very quick horse. If it doesn't work out we can go back to nurseries."

Battle on his hands

All three of Battle Of Jericho's runs have been in Ireland over six furlongs, so the last-time-out maiden winner has a different challenge here.

Trainer Aidan O'Brien said: "He made all to win his maiden at Leopardstown. He's done all his racing so far over six furlongs but we've always thought he has the pace to drop down a furlong.

"It looks a very good race and we're just hoping he goes well."