Elliott showcases his prowess on the Flat as Beckford proves best 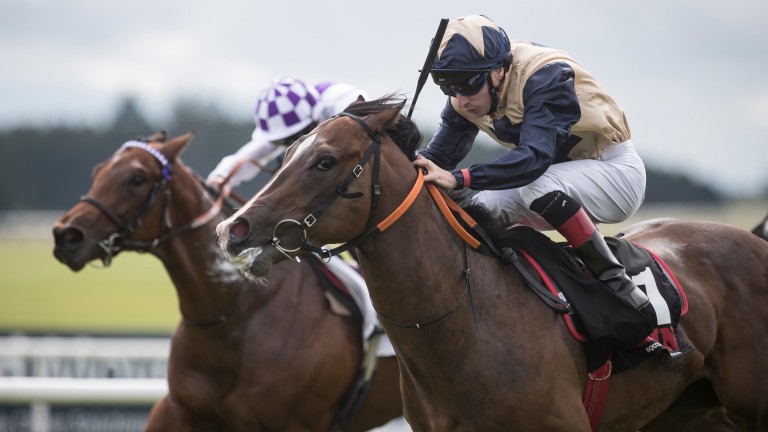 Beckford (near side) holds off Verbal Dexterity to land the Railway Stakes
Patrick McCann
1 of 1
By Mark Boylan 7:23PM, JUL 1 2017

While Don Cossack and Silver Birch may be the two most defining horses of Gordon Elliott's illustrious career, Beckford on Saturday wrote his name in the history books as the landmark horse of the trainer's early exploits on the Flat.

The son of Bated Breath, who earlier this season became the jump trainer's first two-year-old runner (and winner), showed an extremely likeable attitude to take the Group 2 GAIN Railway Stakes at the Curragh, providing the master of Cullentra House with his biggest success in this sphere.

"We liked him and I thought he'd improved from his last start but I can't believe it," said Elliott.

"We thought he was working well, but we had nothing to work him with. He's a fair horse."

An 11-2 shot, the mount of Declan McDonogh was never far away from the head of affairs and took control of matters inside the final furlong when powering away to score by a length from longtime leader Verbal Dexterity in second and Coventry Stakes third Murillo, who was sent off the 6-4 favourite.

"He was probably in front plenty soon enough," said the winning trainer. "He's tough and he stays."

An obviously delighted Elliott expressed his satisfaction with the win, but was equally as keen to assure his supporters that the jumping code remains his definite priority.

He said: "Jumps is my number one – nothing else matters to me other than National Hunt racing.

"This is a bit of fun for the summer, it fills a gap. I'm not going to get ahead of myself – I've got some great jumps owners."

When asked about the exciting two-year-old's next target, the winning trainer – far more familiar with the jumps programme – said his star would be targeted towards "the Group 1 Flat race over 6f . . . what's it called . . . the Phoenix" at the same venue next month.

Beckford, bought for €55,000 at the Goffs Orby Yearling Sale last year, was sold to Newtown Anner Stud Farm after an impressive debut success at the Curragh.

"It was nice to do it and I'd like to thank the syndicate that sent him to me, as well as Newtown Anner Stud," said the Cheltenham Gold Cup and Grand National-winning trainer. "This is the first horse I've had for them, so I'm delighted."

When asked if he'd be investing in more yearlings on the back of this success, Elliott – cruelly denied the Irish jump trainers' title on the final day of the season – said: "I'll go again next year but jumping is what matters – I know where my bread and butter is."

FIRST PUBLISHED 4:52PM, JUL 1 2017
I'm not going to get ahead of myself and jump racing is the number one priority