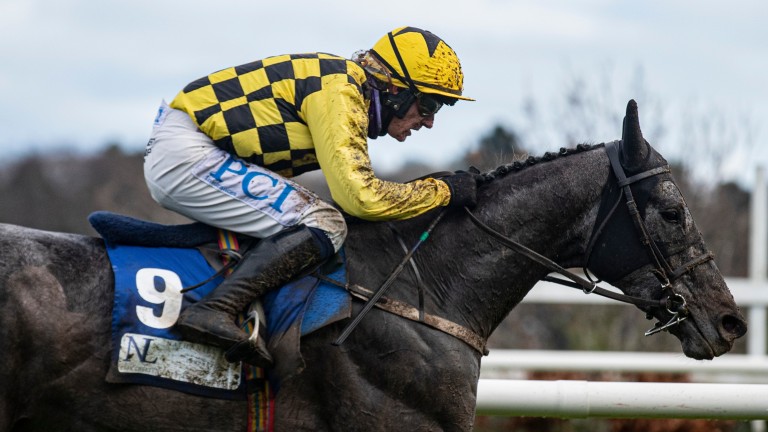 Gaillard Du Mesnil: possibly the pick of the big three in the Ballymore
Patrick McCann
1 of 1
By Richard Birch and David Carr UPDATED 7:15PM, MAR 16 2021

Even the most cursory of glances at this Grade 1's roll of honour highlights the fact the winner must combine the speed to be  competitive in high-class 2m races and the stamina to get home over 2m5f.

Recent alumni Envoi Allen (2020), Yorkhill (2016) and Faugheen (2014) are examples of Ballymore heroes who won top-grade events over 2m prior to proving themselves as effective at longer trips.

None of the 'big three' this year graduated via winning major events at 2m, but that does not mean they are devoid of speed.

After all, many believe Bob Olinger, who has displaced Gaillard Du Mesnil as favourite in recent days, to be tailor-made for the demands of a fast-run Supreme Novices' Hurdle.

He has raced exclusively on a soft or heavy surface to date, but connections are adamant he won't show his very best until encountering less severe terrain.

Ground conditions at Cheltenham won't be quick, but they are most unlikely to be as searching as he's encountered in Ireland this winter.

Bob Olinger was an impressive six-length winner of a Naas Grade 1 in January – a race Envoi Allen landed en route last year – and now seems likely to be sent off market leader. Four of the last ten favourites have justified their position.

Bravemansgame is held in high regard by Paul Nicholls and simply pulverised Star Gate by ten lengths in the Grade 1 Challow Hurdle at Newbury in December. He has been kept fresh for this ever since.

While that run – emphatically the best of his career – came on soft going, his two previous wins in novice hurdles were on good ground so conditions are unlikely to faze him.

Bravemansgame's Chepstow second to Soaring Glory over 2m on good hasn't worked out too badly either, with the winner going on to land the Betfair Hurdle.

However, while both Bob Olinger and Bravemansgame bring strong credentials into the race, perhaps the pick of the three main protagonists is the Willie Mullins-trained Gaillard Du Mesnil.

He was generally a 6-1 shot for the Ballymore prior to his Leopardstown Grade 1 success last month which prompted bookmakers to halve his odds.

The way in which he cruised round Leopardstown in that 2m6f contest before settling matters with a strong surge after the final flight smacked of a Ballymore winner in waiting. He won by five lengths, but that could easily have been extended.

You would expect Gaillard Du Mesnil to possess superior speed and class to Bear Ghylls, who is unbeaten in four starts but taking a mighty step up in grade this time.

While Bear Ghylls boasts great potential and will be suited by the longer trip, a five-length defeat of the 122-rated Stormy Flight in an Exeter handicap last time suggests he will need to take a major step forward to thwart the big three.
Race analysis by Richard Birch

Through all the Cheltenham build-up, Paul Nicholls has pronounced that Bravemansgame is his best chance of a winner.

That is from a man who, surprisingly, has not had a runner in this race since Rock On Ruby finished second in 2011.

That horse returned to lift the Champion Hurdle 12 months later, while Denman, runner-up in 2006, took the RSA Chase and the Cheltenham Gold Cup in the next two seasons, showing the calibre of animal the Ballymore can attract. 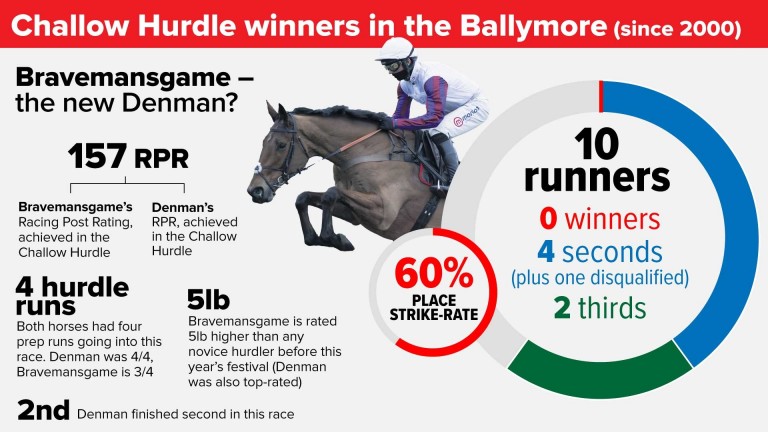 This time Nicholls has made no secret of the fact that he believes Bravemansgame could be cut from the same cloth, as a progressively high-profile novice already proven in Grade 1 company.

Like Denman, he showed what he can do with a hugely impressive victory in the top-level Challow Hurdle at Newbury.

Nicholls said: "He's done nothing wrong this season, he's beaten what he's had to beat. He won a Grade 1 race last time and we're very happy with him.

"I haven't had a runner in this for a while, but you've got to have the right horse and run them when they have a chance – and he's one who's got a great chance." 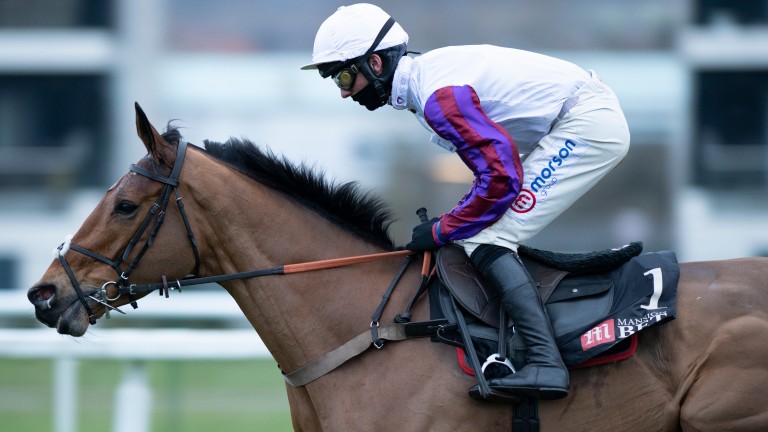 lrish contingent well up to scratch

Irish novice hurdlers are mighty hard to beat at Cheltenham – and nowhere more so than in this race.

While they have won the Supreme four times in the last seven years (before Tuesday) and the Albert Bartlett five, they have given best just once in the Ballymore in that period.

And they are not showing no sign of loosening their grip, supplying two of the three clear market leaders.

Willie Mullins knows what is needed, having trained a record four Ballymore winners, and believes that Gaillard Du Mesnil "looks to have all the credentials you need".

The five-year-old was an impressive winner at last month's Dublin Racing Festival at Leopardstown, and Mullins said: "He travelled over well and the recent rain is a huge help. His form is rock-solid and we're confident of a big run."

Bob Olinger was just as stylish a Grade 1 winner at Naas in February, and trainer Henry de Bromhead said: "He's done nothing wrong all season and you'd have to be delighted with the way he has progressed over the last few months.

"It's a very good race, but he goes there in really good form."

Simply getting to Cheltenham might be seen as something of a result for Nicky Martin and Bear Ghylls.

The last time the unbeaten hurdler was due to race, his Exmoor stable was snowbound – the lorry had to be towed out so that he could gallop at nearby Philip Hobbs's yard.

Having beaten the snow, he then fell victim to the rain which caused Cheltenham's late-January meeting to be abandoned due to waterlogging and cost him match practice.

Even without that run, Bear Ghylls has shown the quality to deserve a crack at Grade 1 company, taking his three hurdle races in the style of a smart novice.

"We've had to go over a lot of hurdles to get there but we're ready to go and he's very well, and very fresh because he hasn't run for a while," Martin said.

"I don't know if he's good enough, we'll find out, and he'll definitely be better next year when he sees a fence, but he's in good order and it's very exciting."

All the last seven winners of this race were six-year-olds and nine of the last ten, with the first three home last season all that age group. Gaillard Du Mesnil and Optimise Prime are the only non-six-year-olds in the field this time. 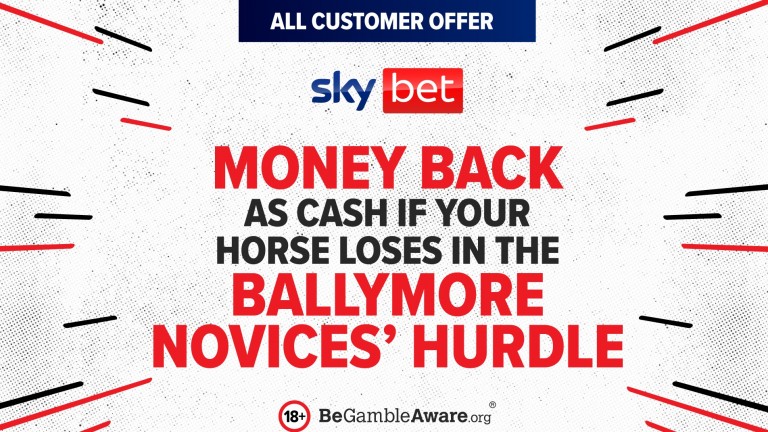 Sign up to a new Sky Bet account here and you can get money back as cash if your selection loses in the Ballymore Novices' Hurdle on Wednesday. Max refund £10. Applies to your first bet only, win singles or win part of each-way singles only. Free bets and cashed out bets excluded and Best Odds Guaranteed does not apply on this race. Full T&Cs here.

This applies to all bets placed on Racing Post products

Kim Bailey, trainer of Does He Know
The owners are keen to run in this race and I think you have to forget his last two runs. He didn't get home in the ground last time and, if he behaves himself, he could easily run into a place if he's lucky.

Joseph O'Brien, trainer of Keskonrisk
I thought he ran well at Leopardstown over Christmas when third to Appreciate It. The ground was a bit soft for him at the Dublin Racing Festival so that's why we gave it a miss. It looks a hot race, but he’s a nice horse.

Ben Pauling, trainer of Optimise Prime
He won two novice hurdles as he liked at Hereford and they worked out nicely. He ran in the Sidney Banks but had to make his own running and was probably a bit short of a gear on a sharp track. It's a big ask, but he's a proper hurdling type who should be able to jump and travel at the speed they will go. He's a big price but he'll do himself justice.
Reporting by David Carr

FIRST PUBLISHED 6:00PM, MAR 16 2021
You've got to have the right horse and run them when they have a chance – and he's one who's got a great chance